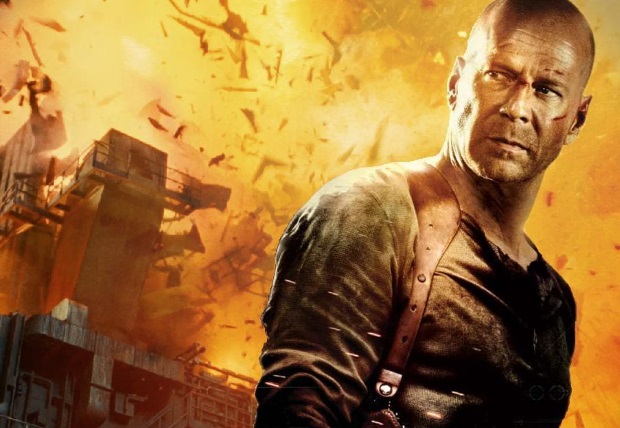 I have to say that although I will never watch this movie with the same love as the original trilogy, it’s still a hugely entertaining action movie and watching Bruno dispose of bad guys never gets old… even if he does.

Review: I bet you were all expecting me to to give this movie a terrible review, but upon giving it another shot tonight I gotta say that I enjoyed it. It’s not nearly the awful movie that everyone says it is, but it’s not without its flaws.

First of all, the two main things which bug me about this movie the most are Timothy Olyphant and Justin Long. Olyphant is a good actor but he just didn’t work as a villain in this movie. Where Hans Gruber would be sophisticated yet calculating and ruthless, it would come off as natural and you would believe it, but in this you just feel that Olyphant is trying too hard to be evil and it just didn’t work for me.

Justin Long has a face I would never get tired of beating and his character in this movie does not help his cause. I would actually be on the side of the villains in this one and happily leave him to them. His constant bitching and whining was just annoying and when you compare him to the greatness of Samuel L. Jackson in Part 3 it’s laughable.

I also hated having Kevin Smith in it as it just feels like pandering to the fanboys which was really lame, although his character could have been a lot worse.

The script in general is pretty forgettable and it does lack the casual brutality of the original trilogy. This Unrated Cut is a little better though as it does have a bit more violence and McClane has a bit more of his personality back, he is no longer the cool McClane we loved from the first three but is now an older man filled with regret (to paraphrase Inception).

What I like though is that McClane really finds himself again when he’s killing bad guys; it’s just what he’s good at and when he’s beating ’em down it’s difficult not to cheer along.

I think the better villain would have been Maggie Q as Die Hard has yet to have a female bad guy and it would have been a nice twist. Her fight with McClane is the high point of the film and this Unrated version is a bit more brutal ending with McClane shouting “Fuck you, Bitch!” which is much more like it.

He also gets to say his signature line in this version without it being edited like in the puny PG-13 version. This is definitely the superior cut of the movie and I think if this was the version they released in cinema the film would have a better rep with fans.

Marco Beltrami takes over from the late, great Michael Kamen and provides a pulse pounding action score, maintaining the original Die Hard themes too. Props for having Creedence Clearwater as well playing one of my favourite songs in the movie: “Fortunate Son”.

This is the first time I noticed Sung Kang from the Fast & Furious movies was in this; it’s only a small non-actiony role but cool nonetheless.

A lot of people complain that the action is too ridiculous, which it is but like I said before, all 5 films are ridiculous, that’s the point. Sure McClane hanging on to the jet at the end is utter bollocks but it’s really well executed and a helluva lot of fun. The gas mains explosion was awesome too and there are some great stunts too.

One of the best non-action scenes is the clip with all of the Presidents giving out the warning from the bad guys which must have taken ages to do.

Overall, I have to say that although I will never watch this movie with the same love as the original trilogy, it’s still a hugely entertaining action movie and watching Bruno dispose of bad guys never gets old… even if he does.