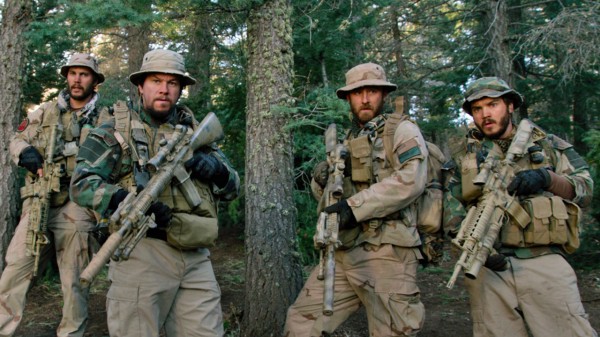 Lone Survivor is a harrowing tale of heroism in a desperate situation, with fantastic performances from all involved.

Plot: Based on the failed June 28, 2005 mission “Operation Red Wings”. Four members of SEAL Team 10 were tasked with the mission to capture or kill notorious Taliban leader Ahmad Shahd.

Review: After the mis-step that was Battleship, Peter Berg utterly redeems his name with this excellent war movie that has a stellar cast that includes Mark Wahlberg, Taylor Kitsch and Ben Foster.

It’s good that Taylor Kitsch is still getting work after a rough few years; he’s very likeable on and off-screen and it’s great to see him in a movie which might actually be successful.

The acting in general is excellent with plenty of macho, military-esque dialogue and it looks like the cast genuinely went through Hell. What makes the movie work so well is the fact that it’s based on a true story. You’ll care for each of the characters and even though you know the outcome, you want them all to get away. They come across as brothers and it makes the story more authentic and tragic. When you get to the little photo montage at the end, be sure to have the hankies ready.

Lone Survivor is a harrowing tale but it’s also magnificently shot with some amazing cinematography. It’s almost a bit Michael Bay-esque with the helicopter silhouettes in front of sunsets, except it doesn’t have any asinine comic relief or awful dialogue.

Story-wise, it’s nothing new but the way it’s executed is flawless and at about the 40 minute mark it really kicks into gear.

The only thing which niggled at me though was the obvious foreshadowing from Kitsch’s character; his wife wants an Arabian horse for their wedding… oh, so you’re getting married? You’re dead!

When the action kicks in, it doesn’t look cool or glamorous but visceral and very real. The editing blew me away; whenever the squad are literally running for their lives from The Taliban and they jump off the cliffs it looks unbelievably painful; you can feel every thud and I found myself wincing several times. That entire sequence lasts about 20 minutes and proves what a fantastic director Berg really is.

The music by Steve Jablonsky is remarkably similar to Brian Tyler’s score to Battle: Los Angeles, which suits me fine as it’s one of my favourite scores. It plays at the right moments and cuts out during the action to put the focus on what’s going on; it’s never overly dramatic or invasive which is what a score should do.

Overall, Lone Survivor is a harrowing tale of heroism in a desperate situation, with fantastic performances from all involved. I would say it deserves the Oscar for Best Editing and Sound Design as they really stood out. It’s already one of the best films of the year and it’s only January.