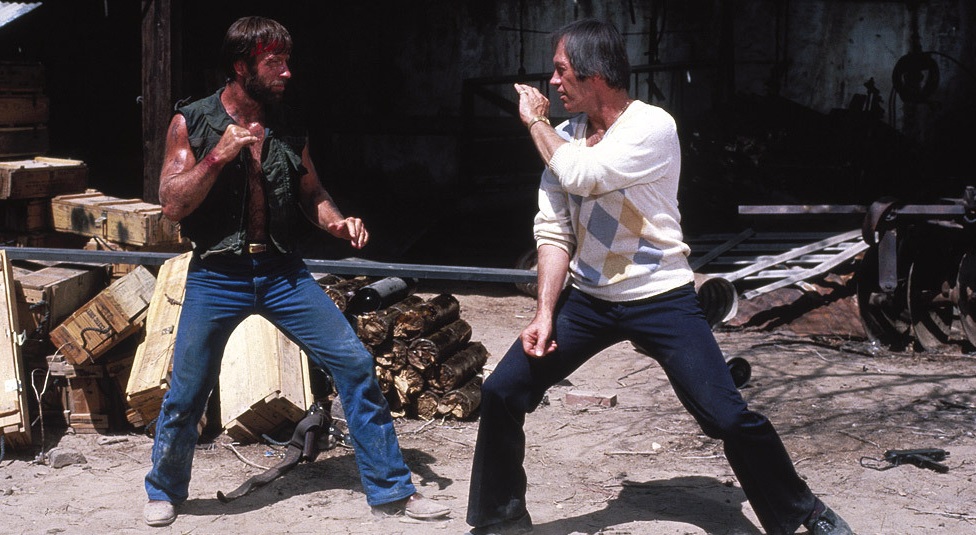 Plot: Texas Ranger J.J. McQuade (Chuck Norris) likes to work by himself, until a Latino state trooper, Kayo Ramos (Robert Beltran), needs his help to find out who hijacked a U.S. Army convoy and hurt Ramos’ daughter. With the help of FBI agent Jackson (Leon Isaac Kennedy), the team tracks down drug trafficker and arms dealer Rawley Wilkes (David Carradine). After Wilkes kills a federal agent, McQuade battles the criminal using all of his skills and training, including guns and martial arts.

It had been a few years since I’d watched the Chuck Norris vs. David Carradine opus Lone Wolf McQuade so now seemed like the right time to revisit one of my absolute favourite Chuck Norris  movies.

When I was younger I didn’t pick up that Lone Wolf McQuade was essentially a Spaghetti Western set in modern times but then I have never been the sharpest tool in the box. Watching it as an adult it’s glaringly obvious as we have a tough Texas Ranger called McQuade (who may be a lone wolf) facing off against a dangerous outlaw called Rawley Wilkes (played with menacing relish by David Carradine).

Set in the sweatiest Texas you’ve ever seen on screen everyone looks like they are about the pass out due to heat stroke but thankfully Carradine was dressed for the climate and has a fabulous wardrobe of golf sweaters to beat the heat. Seriously, what is up with the clothing in this movie? McQuade’s friend Dakota (L.Q. Jones) sports a wonderful array of floral shirts but he’s so damn manly he doesn’t care.

Speaking of which, this is easily one of the manliest man movies that ever manned as there is so much chest hair exposed on a regular basis it’s impossible to not feel inferior while watching it, although by the time the end credits roll your chest hair will have grown a beard, smoke 2 packs a day and have 3 ex-wives.

Norris has never been hairier, dirtier, sweatier or manlier than in this movie as the Ranger who likes to do things his way; his house is a mess, he drinks beer all the time and is just everything women want and who men want to be. When the lone wolf meets a potential mate in Lola (Barbara Carrera) she makes a fatal mistake of cleaning his house without his permission; that alone is punishable by death but then she has the audacity to throw out the man’s beer. Oh Lola…

Lone Wolf McQuade grabs you right from the start with its Ennio Morricone inspired Western theme playing then it opens on McQuade’s eyes, he adjusts his hat and a hero is born.

From the very opening we can see that McQuade is obviously badass however, he isn’t invincible and even screws up on a regular basis; as they try to arrest some cattle rustlers several cops die which I’m sure McQuade could have prevented if he wasn’t standing like a dreamy silhouette on top of a hill watching the action from afar. Needless to say he catches the rustlers but his local shouty police captain isn’t happy and gives him what for because he can’t just go around acting like some kind of lone wolf, doing things his way; there are procedures dammit and he has to play by the rules and look good doing it.

Obviously McQuade isn’t impressed (and why wouldn’t he be?) but this doesn’t stop him from being dumped with a new partner called Kayo Ramos (Commander Chakotay!!) who he is reluctant to work with but he ends up being useful so McQuade keeps him around.  So they work together in trying to bring down Carradine’s smug bastard arms dealer who is an all round bad egg.

I have to tip my hat to Carradine (RIP) who excelled in this role and Rawley Wilkes is such an asshole in this movie that you hate him every second he swaggers on screen; he is always smoking a cigar and never seems to be fazed by anything but we do know that by the end of the movie he is going to have an epic showdown with Chuck Norris. Speaking of which, the bit just before they fight is is amazing as a pipe organ starts playing as part of the soundtrack so you know this is going to be a true clash of messianic titans.

The movie is packed with action; we’ve got punch ups, shoot-outs, chases and then the final half hour it transcends from a Western to a Bond movie as Wilkes now has a “secret lair” in the desert. But before that you have one of the greatest scenes of all time with Chuck in his truck (not giving a fuck?) as he is buried alive by Wilke’s in true Bond villain style so the hero can escape. Near death McQuade stoically grabs a beer and douses himself in the life giving ale, steps on the gas and drives out from the ground to sweet freedom! USA! USA! USA!

Although McQuade starts off as a lone wolf he finds out that this isn’t a battle he can win alone so he goes in with his FBI friend Jackson and new partner to kick some ass. So his arc is he learns that you have to work together to achieve a common goal. That’s beautiful.

The final half hour is an action fan’s dream as our heroes begin an assault on Wilke’s lair with explosive results culminating in said pipe organ infused showdown which doesn’t disappoint although let’s admit that we all were surprised and cried a little when Lola died.

It takes itself all rather seriously but as a modern viewer I think you’ll find yourself smiling unintentionally (especially during the frolicking with the hose scene) and hopefully drinking copious amounts of alcohol to enjoy this classic to its fullest. Hey Kid! Bring me a beer!