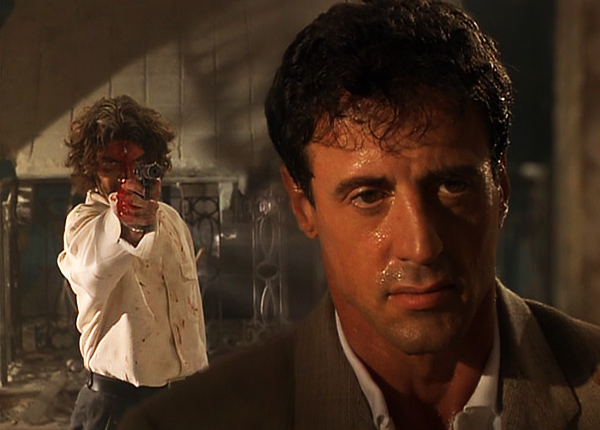 Plot: Assassin Robert Rath (Sylvester Stallone) arrives at a funeral to kill a prominent mobster, only to witness rival hired gun Miguel Bain (Antonio Banderas) complete the job for him — with grisly results. Horrified by the murder of innocent bystanders, Rath decides to take one last job and then return to civilian life. But finding his way out of the world of contract killing grows ever more dangerous as Rath falls for his target, Electra (Julianne Moore), and becomes a marked man himself.

Assassins may not be ranked up there with Sylvester Stallone’s best action pictures but I’ve always had a soft spot for it mostly due to Antonio Banderas as the wonderfully unhinged Miguel Bain.

The film sits at 16% on Rotten Tomatoes which seems unfair as it’s still a fun time with Stallone giving a restrained performance and allowing Banderas to steal every scene.

Julianne Moore is well cast as the mysterious Electra who is a hacker way out of her depth so she teams up with Robert Rath (Stallone) to avoid being taken out by Bain.

Considering Assassins is just over two hours long it’s still well paced and not short on action; we get several explosions, chases and shoot-outs making for a somewhat unremarkable but diverting action picture.

It really is Banders that makes this movie as entertaining as it is with his over-the-top antics and twitchy performance.

It was only on this viewing that I noticed Muse Watson as Ketchum, Robert’s mark in the opening in the swamp. He of course is the killer from the original I Know What You Did Last Summer; his line “what shoes will you be wearing when your day comes?” comes back to me often. We also have Richard Donner regular Steve Kahan in a small role as Alan Branch, who Miguel takes out at a funeral.

I love looking into trivia of movies and potential casting that never happened; for instance Sean Connery, Arnold Schwarzenegger, Wesley Snipes and Michael Douglas were all considering for roles in the film at various stages. Mel Gibson was even interested in directing but got involved with Braveheart instead so Richard Donner helmed the project.

Donner stated at one point that the film would have worked better with Stallone and Banderas’ roles reversed but I disagree; I love Banderas in this movie and to this day Bain is one of my favourite characters of his.

A few scenes from the trailer didn’t make the final film and IMDb has listed them below:

You can immediately recognize Mark Mancina as the composer as the music sounds similar to Speed but as he took over from Michael Kamen then he apparently didn’t have time to create a main theme which is why it’s rather forgettable. I don’t think it needed a main theme as the score worked fine for the story.

Overall, Assassins may not be perfect but I still have a good time with it and our 3 leads do the best they can; this is Banderas’ show and he has the best dialogue stealing every scene. It’s not classic action cinema but it’s worth a watch.