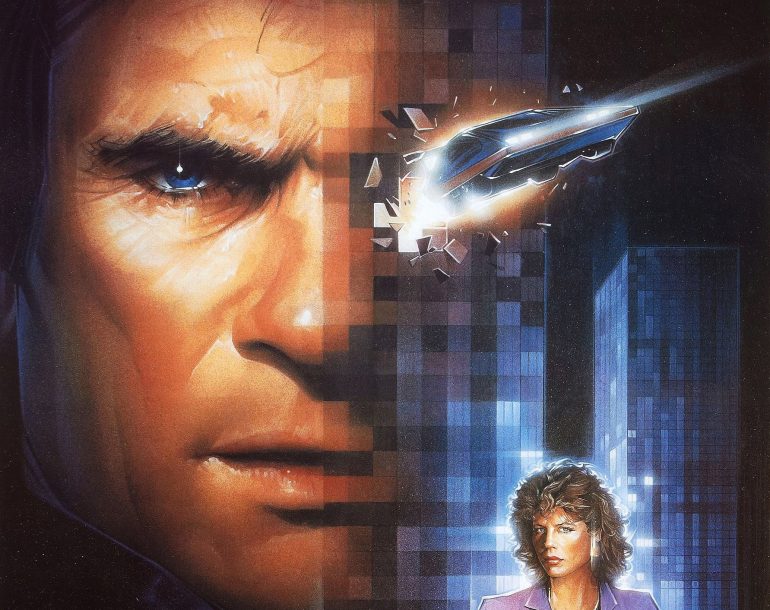 Looking Back at Black Moon Rising (1986)

Plot: A thief, Quint (Tommy Lee Jones), is hired by the Justice Department to steal incriminating tapes from a corrupt corporation. The tapes vanish when Quint hides them in the back of a hydrodynamic powered racing car that is stolen by a hot car ring.

When you watch Black Moon Rising it immediately feels like a John Carpenter film; he wrote the screenplay but didn’t direct it and yet it still very much feels like his movie. It had apparently been sitting for 10 years before it eventually got made but ended up being directed by Harley Cokliss who also helmed the Burt Reynolds gem Malone.

With a cast that includes Linda Hamilton, Tommy Lee Jones, Robert Vaughn and Nick Cassavetes you know that this is going to be a good time and it doesn’t disappoint.

It’s very much a product of the 80’s and everything looks like it came form that era which is another reason to love it.

The Black Moon of the title is a new custom car capable of going at incredibly high speeds; it is once again very much a product of the period in terms of looks, but it would make the commute to work a whole lot easier.

When Quint steals the tapes from the corrupt corporation, he hides it in the back of the Black Moon which is headed for The Betsy in Los Angeles. He makes his way there separately and of course things go South very quickly as the car gets stolen. So it’s up to Quint to work with the builders of the car to steal it back and retrieve the tapes.

It’s a really fun story that moves at a fast pace and although she allegedly hated working with Tommy Lee Jones at the time (due to his alcoholism) Linda Hamilton and Jones are great to watch on screen together.

Hamilton’s character Nina is very appealing despite being a criminal; she is very different from Sarah Connor and it’s a role she deserves more credit for.

Tommy Lee Jones makes the role of Quint his own despite it originally being planned for Charles Bronson; Jeff Bridges, Don Johnson, Tom Berenger, and Richard Dean Anderson were also considered for it.

The hardest scene to sit through is when Quint is getting really badly beaten by some thugs as it’s never easy to watch stuff like that, but he obviously escapes and gets to have a satisfying one-on-one at the end.

Robert Vaughn always made for a magnetic villain; he was never physically threatening but he had that icy cold stare which made him come across as truly malevolent.

The cast are all on fine form and there are some choice lines too (mostly improvised by Jones).

There are some impressive stunts and plenty of action but it also gets rather tense especially when Quint is climbing across a rope from one building to another. Jones did a lot of his own stunts too which is always awesome as it just makes the action look more authentic.

Lalo Schifrin (Mission: Impossible/Dirty Harry) provides the score and it’s funny as it sounds like he is very much trying to mimic Carpenter’s electronic style. It’s not a classic score but I do still enjoy it.

Overall, Black Moon Rising is the best John Carpenter movie he never made; it feels very much a product of the 80’s which is why I love it. The cast are on top form and there is some fantastic action making this a must-see.