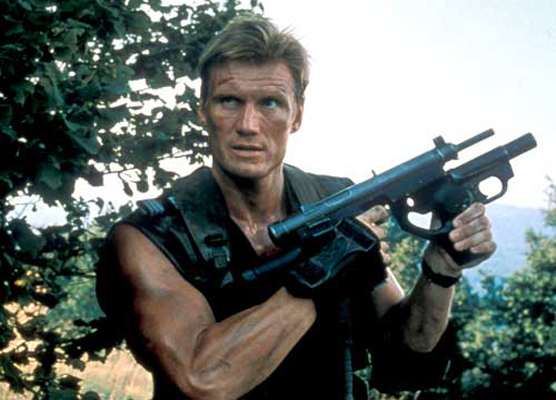 Looking Back at Bridge of Dragons (1999)

Plot: The tough and cold mercenary Warchild, is working for the man who took care of his war training and upbringing, the greedy General Ruechang. Ruechang is planning to take over the country by marrying Princess Halo. But Halo discovers that Ruechang killed her father to gain more power than he had working for the King, so she decides to run away. Warchild is the one who has to bring her back to Ruechang, but the one thing no one counted on happens… Warchild and Halo falls in love, and together they take on the forces of Ruechang..

Isaac Florentine directs this rather crazy but hugely enjoyable actioner starring Dolph Lundgren as the amazingly named Warchild (back off Warchild, seriously). Bridge of Dragons is a bit of a strange film as it almost defies genres; it’s a post-apocalyptic fantasy tale that just feels… unique I think is the best way to describe it.

Warchild starts off as a loyal soldier in General Ruechang’s (Cary -Hiroyuki Tagawa) army because he saved him from slavery to join the military. Behind the scenes Ruechang is abusive towards his fiancée Princess Halo (Valerie Chow) but he needs her to be his bride so he can maintain control over the people. Halo runs off on their wedding day and Ruechang sends Warchild to bring her back; it doesn’t take long for Warchild to catch up to her but along the way she manages to convince him that the General is a monster who murdered her father (the true king).

When Warchild brings Halo back home the General slaps her publicly so Warchild rightfully decides to kick him in the face and escape with the princess.  They join the rebels but their plans are rapidly thwarted when Ruechang’s helicopters show up and commit a massacre but the princess convinces the General to leave Warchild alive by agreeing to marry him. Warchild decides it’s time to take down this despot once and for all and the final battle ensues. Now that I’ve spoiled the entire film for you let’s talk about if it’s any good or not.

I’ve always had a soft spot for Bridge of Dragons mostly because of Florentine’s direction giving the action a kinetic energy and it rarely goes a few minutes without a fight scene, shoot-out or explosion. It’s all practically done too so the action scenes still impress. Story-wise it’s predictable stuff and some of the acting is a bit ropey but that’s part of the entertainment factor. Apparently the script filmed is different from the one that the Dolph and Isaac agreed on when they signed on the project. IMDb states that “Clint Lien had been asked by Nu Image to rewrite Carlton Holder’s original screenplay, and the cast were not alerted to this until they arrived in Bulgaria to film”.

Bridge of Dragons has amazingly over the top sound design where we get whooshing sounds any time someone moves there head or partakes in a fight scene and as I’ve said before the world would be a far more interesting place if such sound effects happened in reality.

Dolph Lundgren is as sympathetic as ever making for an interesting lead who is conflicted about his loyalties; Cary-Hiroyuki Tagawa is one of my favourite actors and was the go to villain for so many action movies over the years. As I said in my Mortal Kombat review he’ll always be my Shang Tsung. This movie also reunited Dolph and Tagawa who of course worked together on the 1991 gem Showdown in Little Tokyo.

Martial Outlaw’s Gary Hudson plays Warchild’s friend Emmerich who teams up with him at the end and gets to take out the trash. I feel like Valerie Chow was a little wasted as Princess Halo as early on it’s established she is a skilled fighter but by the end she is merely a damsel in distress waiting to be saved by Dolph so she doesn’t get a moment to truly shine.

Overall, Bridge of Dragons is a strange beast and may not be for everyone but for action junkies looking for fights, explosions and shoot-outs there’s plenty to enjoy. Dolph is at his badass best and Cary-Hiroyuki Tagawa makes for an enjoyable villain as always.