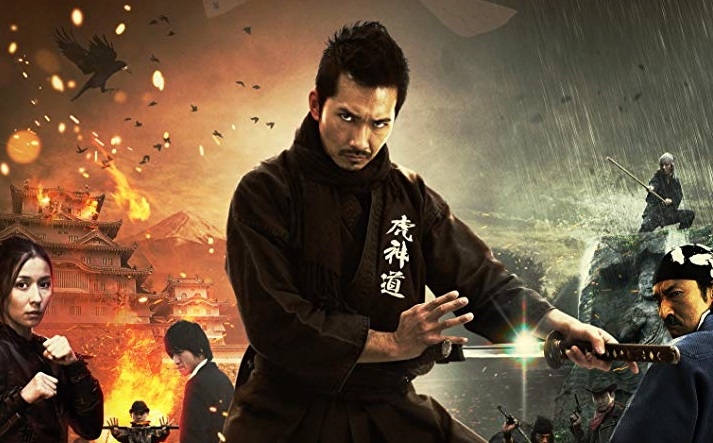 Plot: Toramaru, lord of integrated martial arts Mugen-ga-ryu, ends his training journey and visits his master, Gensai. “You have to duel with every martial arts master and win, in order to obtain their esoteric books of martial secrets.” Receiving such an order from Gensai, Toramaru makes a pilgrimage around Japan and spends a year fighting. Through his fights with genuine masters in every martial arts such as kung-fu, stick fighting, sword fighting, and nunchaku, this film passionately tells what “Budo” is and what Bushido is.

After being impressed by Hydra last week I thought I would have a look at another movie with Masanori Mimoto entitled Bushido Man. I’ve seen it on Tubi and various other sites but never watched it until yesterday. I wish I had seen it sooner as I never realised what a treat I was missing.

This is a movie which doesn’t take itself seriously at all with a wacky sense of humour that had me literally laughing out loud at various points including a scene with a severed arm being used like nunchucks and guns attached to arms that fire when you are making a punching action. It’s totally bonkers and the type of crazy shit I love watching.

There isn’t much in terms of story or characterization but there are some incredible fight scenes and the one featuring our hero Toramaru (Mitsuki Koga) fighting a Yakuza (Masanori Mimoto from Hydra) is one of the many highlights.

Toramaru travels Japan looking for the various masters of their martial arts and he challenges them to a fight so he can gain their knowledge to make him the ultimate warrior. He realises that studying what they eat is how he can beat them… I’m not really sure how that logic works but it’s such a crazy load of nonsense that it doesn’t matter. It’s all just an excuse for lots of ass-kicking and if you love your fight flicks then this is a must-see.

At an hour and 27 minutes it wastes no time in getting going and never lets up until the end credits… which happen twice in hilarious fashion.

Bushido Man is also pretty stylish and despite not having a huge budget it looks great and is just plain weird at times which is always a plus for me.

If you’re looking for a serious and brooding martial arts saga then this ain’t it but Bushido Man is massively entertaining and the perfect nonsense to watch on a drunken Saturday night… I actually was drunk while watching it which helped as I had tequila for lunch… I mean with my lunch… that’s what I meant.