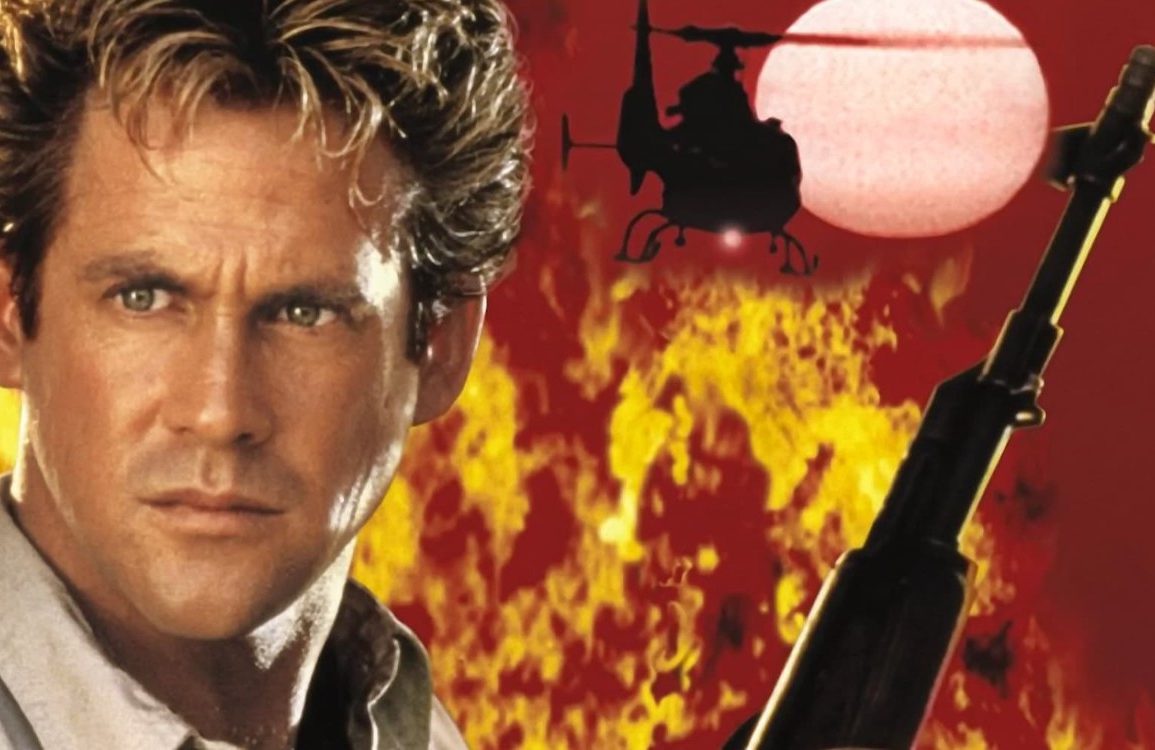 Plot: When Merrill Ross (Michael Dudikoff) is thought to be a C.I.A. agent gone bad and teaming with some other alphabet named agency to take over the oil rich country of Qumir, he finds he’s in the middle of a very explosive situation. Not knowing who he can trust, he’s forced to use a process of elimination through the chain of operatives he encounters.

Michael Dudikoff stars in this Cannon Pictures gem from Kickboxer & True Vengeance director David Worth that delivers everything you would want from an action picture. It’s packed with a massive bodycount, a hot chick, twisty-turny story and of course R. Lee Ermey but I think the real scene stealer here has to be Todd Curtis as the villain Rawlings.

What is up with his hairstyle? Every time I watch this film when he first takes his hat off to reveal this… rosebush on his head I can’t stop laughing. I am of course just jealous that I don’t have such a fine head of hair but it’s really distracting making you never really take him seriously as a bad guy. He does have some really fun dialogue though and looks like he is enjoying every second. Too bad he didn’t do much since then.

R. Lee Ermey as always just eats up the screen as Benjamin Brewster who has a very strange taste in alcoholic beverages. When I spoke with Chain of Command director David Worth a while back we discussed that very thing and he said “regarding the drink choice I’m sure that was R. Lee Ermey’s idea. He was just a wonderful and creative person and a fun guy to be around. He was the easiest guy in the world to work with.”

When he first comes on screen Ermey is in full-on Drill Sergeant mode shouting at everyone as only he can which never fails to make me laugh.

It’s well paced although there is a little too much slow motion during the action scenes but that was the way of things back then and I would take those days back in a second. It’s always awesome to see practical action with some spectacular stuntwork.

If I can mention our interview with David Worth again, we chatted about the stunts in this movie where he said: “Whenever you’re dealing with anything like that you’re 1000% safe. That’s why I use multiple cameras when I’m doing action. I want to make sure I get it the first time. I don’t want the stuntman to have to do it again where you’re really putting the man’s life in danger. They have a lot of safety precautions but I’m always very tentative when dealing with full body burns and things like that. You want to be very careful, take your time and the rule is never rush a stunt. You can rush a lot of things in filmmaking and sometimes you have to because of the schedule but don’t rush a stunt.”

The final showdown between Ross (Dudikoff) and Rawlings is arguably the action highlight as they throw barstools at each other and more with Rawlings getting a thoroughly satisfying demise. I know I sound like a broken record but we need to bring back epic bad guy deaths as it was always the highpoint of any 80’s and 90’s action flick.

In terms of flaws I find that Dudikoff swears more in this picture than I’ve ever seen; being a Scot I normally swear all the time but there was something jarring about it in this movie. His character is also kind of an ass and just rude to everyone but I think that’s the point.

Overall, Chain of Command is still a blast of an action movie with some great set-pieces and a scene stealing turn from Todd Curtis and his hairstyle. Michael Dudikoff rocks as always even if his character is kind of a dick.

While we’re here let’s take a look at what his Kill Count is in this movie.

Yeah, I had a feeling this was going to be in the double digits; most impressive.