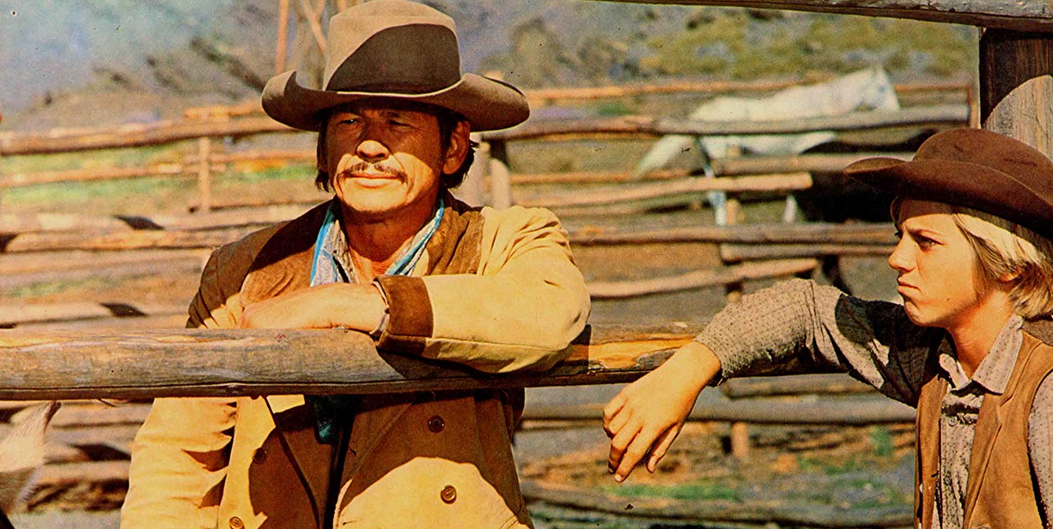 Looking Back at Charles Bronson in Chino (1973)

Chino would be a good double bill with Chato’s Land where Bronson plays a similar kind of character although Chato’s Land is the superior movie and moves at a better pace. Chino is only 97 minutes long but it does drag at times but there are several fistfights with Bronson doing what he does best.

I have a particularly terrible VHS copy of this movie and I’ve never seen it remastered so I am purely going by the version I’ve seen but the music sounded terrible with a really lame song over the opening credits.

The kid is called Jamie and Chino essentially becomes a father figure to him; he could easily have been annoying but is actually one of the best characters and he helps to make Chino more human and sympathetic as he had been hard as nails up until meeting him.

Bronson’s wife Jill Ireland (as usual) has a role as his love interest Catherine but I found the scenes with her were what killed the pacing; she was never the greatest actress but she did bring out the best in Bronson in terms of performances. He even laughs at several points in this movie which is something we rarely got to see. It’s funny how times change as there is one scene where he essentially forces himself upon here so you’re watching it thinking “uhh pretty sure that’s called rape…” but she eventually relents because she loves him really… ok then.

The most surprising aspect of this movie is the downbeat ending; I had an idea in my head how it was going to go and I’m going into spoilers here so if you have never seen this movie then stop reading.

So throughout the movie Chino is harassed by Catherine’s brother Maran who is essentially a racist asshole; he wants Chino to stay away from his sister but this is Bronson we’re talking about so he doesn’t go down without a fight. He decides to marry Catherine and while she is waiting for Chino her brother shows up and tells her to leave and she is not to marry him… so she does. The men wait for him and Chino is attacked and whipped for what feels like 20 minutes. He is healed by his Indian buddies and kills a few of the bad guy’s goons but then decides he is going to leave instead. Se he tells the kid to leave, doesn’t bother with Catherine, burns the house down and rides off alone with nothing. So the bad guy essentially wins which is certainly a ballsy finale but it leaves you feeling pretty empty as you want some kind of satisfying pay off which we never get.

Partially directed by John Sturges who also made The Magnificent Seven, he was sick throughout the making of the picture so Duilio Coletti stepped in which is why the two directors are listed on IMDB.

Overall, Chino may drag a little but Bronson gives one of his better performances and there are several fight scenes; the anti-climactic finale may let viewers down though who were used to seeing Bronson kick ass and ride into the sunset.