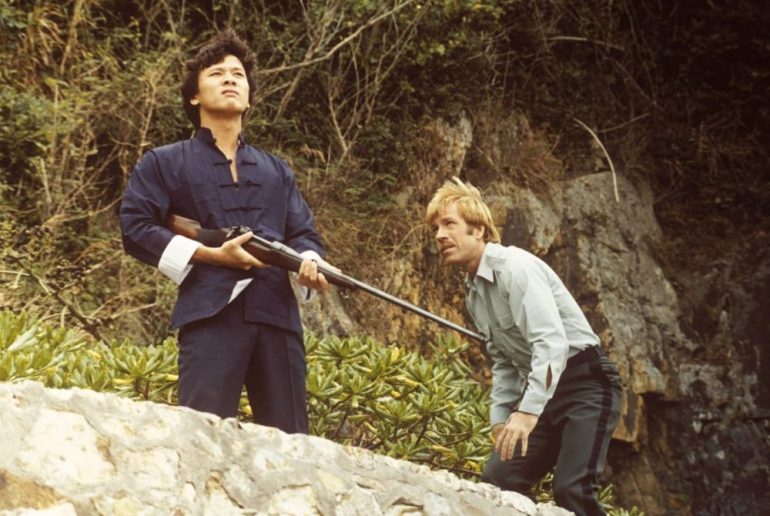 Looking Back at Chuck Norris in Forced Vengeance (1982)

I’ve been going through the site these past few days and noticing a few glaring omissions in reviews/articles so first off is the Chuck Norris classic Forced Vengeance which I watched last night for the first time in about 3 or 4 years.

It’s always been one of my favourite Norris films even despite its flaws; we all know some of the acting is questionable at best but it’s a Chuck Norris film: we’re not watching it because we want to be spiritually enlightened. We want to watch him punch and kick people in the face and indeed he does.

In Forced Vengeance he plays Josh Randall, a casino security guard who is forced into violence after two of his friends are killed so he hides out with his buddy LeRoy Nicely (Bob Minor) who turns out to be pretty useless.

Chuck is going for the cowboy look so he blends in perfectly with all the other cowboy hat wearing Hong Kong residents. There’s a running joke throughout that bad guys always want to go for his hat but that’s just a surefire way to have your teeth removed.

Norris is wonderfully merciless in Forced Vengeance so not only do we get regular punch ups but there are some awesome bad guy deaths as well especially towards the end. This movie also has my all-time favourite Chuck Norris scene. You may be cool, but you’ll never be Chuck Norris jumping off a roof then kicking someone in the face cool.

Randall (Norris) really does lose everyone he cares about in this movie so it’s no wonder he takes no prisoners especially after his woman is raped and murdered by a goon who he has an epic showdown with at the end; I like seeing Chuck in angry form as this is him at his best.

This also has an iconic opening sequence with the silhouette of Chuck fighting a bad guy in front of a neon sign with a rather dated (but still awesome) music score.

Forced Vengeance has the same problem that The Octagon has with Chuck providing an unnecessary voiceover; thankfully he isn’t whispering this time, but it usually just ends up being somewhat distracting.

We get an early and very brief role from Richard Norton who sadly doesn’t get in on the action, but his hairstyle is at least amazing.

Michael Cavanaugh makes for a suitably slimy villain in Stan Raimondi who gives Randall a decent fight in the finale, but his comeuppance is truly satisfying.

This is a rather random segue, but does anyone stare at character once their “dead” to see if the actor breathes and ruins the moment? I do and I noticed Claire (Mary Louise Weller) still breathes after she has been “killed”… Whoops!

Overall, Forced Vengeance has Chuck Norris doing what he does best and all while wearing a cowboy hat; the opening fight in front of the neon sign is a classic and there is plenty of action to keep us all entertained.