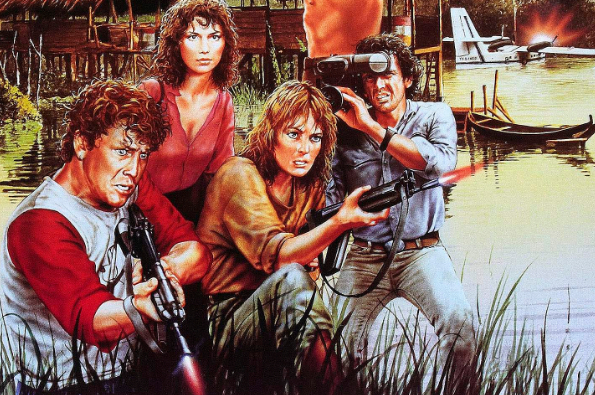 Plot: A reporter and her cameraman connect a surviving Jonestown leader and a TV exec’s missing son to a drug war where jungle installations are being massacred by an army of natives and a skilled white assassin.

I know it’s a cliché but it’s safe to say they really don’t make ‘em like this anymore; Cut and Run is a gore filled action/horror hybrid that we simply would not see get made today. There are scenes of dismemberment, rape, full frontal nudity and more so it’s not for the easily offended.

It wastes no time in getting going with Michael Berryman and his gang of natives attacking a drug factory over a lake; no one is spared as the women are molested, the men are butchered and then fed to the alligators in the water below so it sets the tone early on.

This won’t be everyone’s cup of tea as even I found it a little nasty but it is from director Ruggero Deodato who you’ll remember also helmed Cannibal Holocaust so it shouldn’t come as a surprise.

The Blu-ray of Cut and Run from Red Alert has an informative interview with Deodato who discusses the various challenges of getting the movie made including dealing with the lead Willie Aames who plays Tommy Allo, the young man who is trapped in the jungle in this deadly drug operation. Aames apparently kept getting kicked out of hotels during production as he kept destroying them.

Deodato also talks about how he was warned about working with Richard Lynch who apparently set himself on fire outside the White House once to protest Vietnam but the two would go on to work on five features together… so the interviews on this disc are arguably even more entertaining than the movie. He also mentions that cult leader Jim Jones was a bit of an inspiration for the character that Lynch was portraying.

At 90 minutes it’s never boring with gruesome kills occurring regularly and the make up effects are still convincing. There are several shoot-outs and the finale has a few explosions to keep us action junkies happy.

The score has some cool synth but there’s this rather jarring screaming sound that happens during any of the violent moments which frankly scared the shit out of me every time.

The film has been nicely remastered (even if it doesn’t have subtitles) and the performances are far better than you’d expect making for violently good watch.

Overall, Cut and Run is a gore-filled exploitation movie that will only be for a certain audience (like me) and it sounded equally as gruelling to make as it can be to watch but it’s still worth checking out especially the Blu-ray from Red Alert.