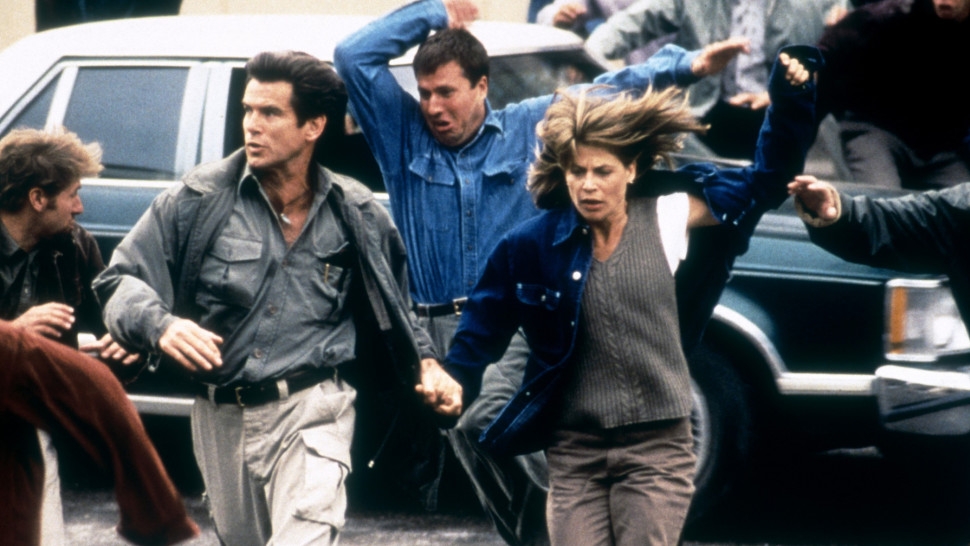 Plot: Volcanologist Harry Dalton (Pierce Brosnan) and Mayor Rachel Wando (Linda Hamilton), finally convince the unbelieving populace that the big one is about to hit their small town and that they need to evacuate immediately, only to discover her two children have gone up the mountain to get their grandmother. With Earth’s clock racing against them, they must rescue the kids and grandma before the volcano explodes in a fury of flame and ash a million times more powerful than an atomic bomb.

I have always had a soft spot for disaster movies; you pretty much know what to expect –  a likeable protagonist who is an expert in their field but has had some tragedy or trauma in their life. They lose faith in themselves and it takes a disaster to happen for them to step up and find redemption. We will also require a stubborn old person who refuses to move from where they are because no pesky volcano is going to ruin their nice lifestyle. There will of course be the bureaucrat who doesn’t believe our hero and it takes the deaths of several civilians to convince them that the danger is real…. They will also die an overly cruel death later in the movie. There is also always a dog that you think is going to die but miraculously manages to survive.

That’s pretty much the case with Dante’s Peak which ticks the majority of those boxes but even after all these years it’s still a bit of a classic. Sure, it has nearly every cliché in the book but the visual effects are still incredible and the build up in the first half makes us actually care about the characters. This is due to the fact they are played by Pierce Brosnan and Linda Hamilton who are both great actors playing against type. Brosnan is certainly not James Bond in this and Hamilton is as far from Sarah Connor as you could get as the is mayor of a small community and well respected. They feel like real people with believable problems but disaster brings them together and they work to rescue Wando’s (Hamilton) family from a fiery death.

The first half of the movie is all build up and characterization so we are rooting for Dalton and Wando but they also manage the rare feat of the children not being annoying. The grandmother is a little irritating but that’s so we aren’t too upset when she jumps into some acid to save her family… she’ll not do that again!

When Dante’s Peak eventually erupts it is well worth the wait with some spectacular set-pieces creating a real feeling of an inescapable nightmare. I always found the ending in the mine a little underwhelming however, as everything up until that point was awesome.

The score by James Newton Howard is suitably epic and if you watch this on Amazon Prime (which I did) then watch it with subtitles as they only add to the entertainment factor saying things like “heroic music swells” and “music builds frenetically”.

Overall, Dante’s Peak is everything you’d expect from a disaster movie but it has genuinely sympathetic characters and some amazing visuals. Yes, it has the usual clichés but that’s all part of the fun making this perfect Saturday night fare.