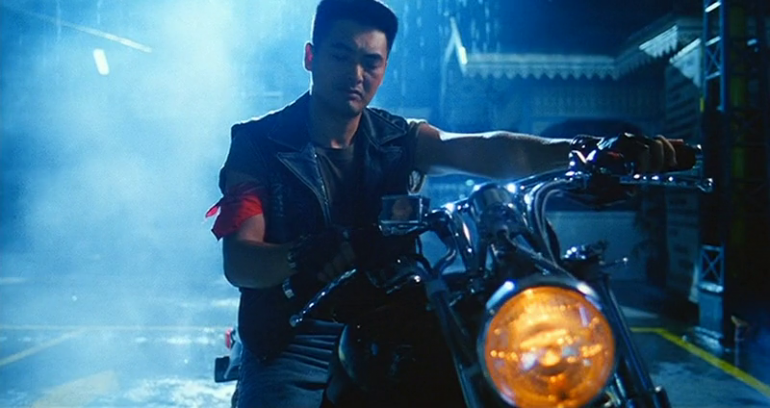 Plot: Jeff (Chow Yun-Fat), who works as a nightclub bouncer in Bangkok, saves his friend Sam (Wong Chow-Sang) from a beating by the local loan shark. The two team up with Sam’s cousin Judge (Simon Yam) to rob an arms shipment, but the loan shark that Jeff ticked off persuades Judge to turn against him.

When Full Contact was initially released in Hong Kong it wasn’t exactly a box office smash as apparently the public didn’t want to see the lead Chow-Yun fat play a violent criminal. Since then it became a cult hit with fans in the US and UK. It was actually one of the first Chow-Yun Fat movies I ever saw and after all these years it’s still one of the most insane action movies of all time but also one of my personal favourites.

I’ve seen various versions and in every one the subtitles differ, sometimes to hilarious effect (“A vomiting crab?”). One thing that never changes though is the sheer greatness of Chow-Yun Fat; he’s almost inhumanly cool in this movie and goes through absolute Hell too both physically and mentally.

On a side note, in one of the versions Chow is called Jeff and in another he’s called Godfrey; only Chow could play a guy called Godfrey and still make him cool.

Full Contact was directed by the late, great Ringo Lam (“City on Fire”, “In Hell”, “Maximum Risk” &amp; “Replicant”) who was a master of action so the shoot-outs and fights are all suitably blood drenched and hyper violent.

It’s incredibly well paced and filled with tension, but also gives you time to care about the characters without ever letting up.

Themes of loyalty, betrayal and redemption are all explored and there are several plot twists keeping it unpredictable and incredibly slick.

The characters are really out there, especially the villains with the nymphomaniac Lau Ngang practically stealing the show.

The supporting cast including Simon Yam and Andrew Wong are all on top form. Yam is a psychotic drug lord who is as unpredictable as he is crazy; he manages to be nearly as cool as Chow though and can light cigarettes with his thumb which I always thought was a neat trick…Wong’s character has arguably the most interesting story as he transforms from a pathetic loser to a competent gangster after betraying his friend.

Overall, Full Contact is a work of deranged brilliance with plenty of stylish action, insane characters and a gripping story to keep action fans entertained.