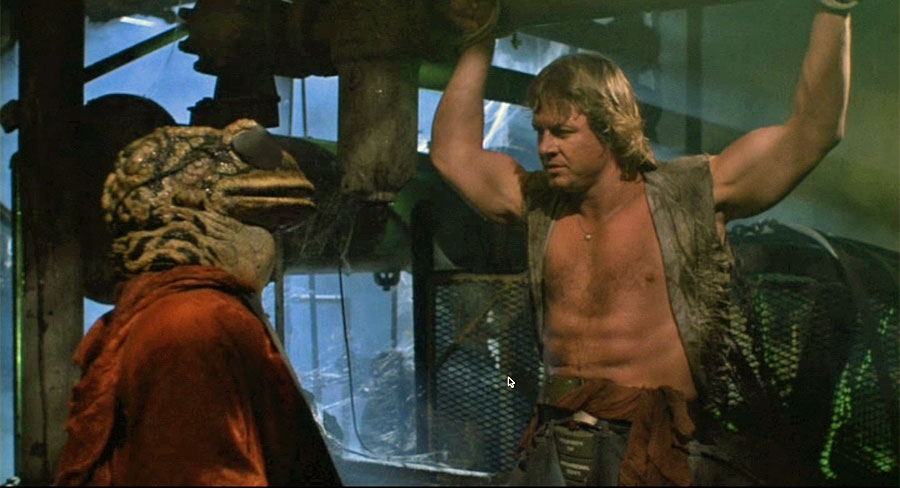 Looking Back at Hell Comes to Frogtown (1988)

The late great Roddy Piper stars in what is arguably the most bonkers movie of his career and is something that would certainly never get made today. With a title like Hell Comes to Frogtown you know you’re not going to get high art but we do get mutant frogs, nudity and a final punch up between Piper and the leader of the frogs known as Toady… I can’t believe I just wrote that.

The plot is set after a nuclear war, where the survivors are divided between horribly mutated beings who live on desolate reservations and fertile women who are searching for scarce virile men in order to multiply and start a new human society. Well Piper just so happens to be one of said virile men called Sam Hell and is allowed out of prison so he can rescue a group of chicks from Frogtown then bang them and get them pregnant so he can save the world. There are some very attractive women in this movie including Cec Verrell who plays tough as nails Centinella and then we have Sandahi Bergman as Spangle who essentially becomes Hell’s “main” love interest.

According to IMDB Sandahl Bergman was supposed to be naked for the Dance of the Three Snakes set piece, but refused to do any nudity on the day this sequence was shot. The scene was adjusted accordingly. Only Cec Verrell had a contractual agreement for nudity. Thanks Cec! She was literally my favourite character and I could have watched a spin-off with her as the lead.

Wait, is that Rory Calhoun? It is, what the Hell was he doing in nonsense like this?

Anyway, Hell Comes to Frogtown doesn’t have much in the way of action for the first 45 minutes however, Sam has to keep fighting off advances from pretty much every women he comes across which must be a terrible burden for him. It has some stunning dialogue like “eat lead, Froggies!” which alone makes the movie worth watching.

The final half hour has Sam rescue the girls and try to break out of Frogtown with Toady and his crew in hot pursuit leading to a Mad Max style climax (he he) in the desert.

If you’ve never seen Hell Comes to Frogtown I feel you need to watch it as it’s unlike anything you’ve seen before and the make up for the frogs is well…. suitably froggy. It’s just so nuts it’s hard to describe. Just watch it and bring beer.