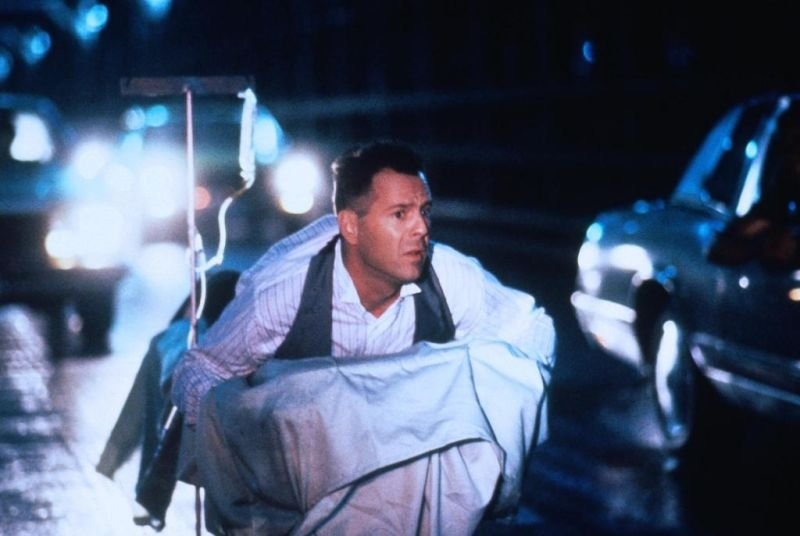 At the time of release Hudson Hawk was seen as a failure both critically and commercially and it’s easy to see why as it’s all such a strange affair… and yet over the years I have grown to really enjoy it as there are some genuinely hilarious moments.

This was back when Bruce Willis had a personality and a light on his eyes that has been gone for several years. He was charming, funny and just had a likable on-screen persona and I don’t think I have ever seen him in such a wacky role before or since.

Hudson Hawk actually has my all-time favourite Bruce Willis one-liner which you can watch below:

“You won’t be attending that hat convention in July!” I’m sorry but that’s bloody hilarious. There are a few choice lines of dialogue and Bruno and Danny Aiello make for a good buddy duo as they sing while robbing places and generally showing a joy for life we rarely we get to see.

This was one of the first movies I saw Richard E. Grant in and he’s wonderfully over the top as the villain Darwin Mayflower; I always found Sandra Bernhard rather unsettling as Minerva Mayflower who as a character just didn’t work for me. She isn’t funny or scary and is mostly just loud and annoying.

Andie MacDowell plays the same love interest she played in every movie from the 90’s although she does get a few really bonkers moments like her dolphin impression which is just bizarre.

There are some fun action scenes with one highlight being our hero riding a stretcher down a highway while being pursued by gangsters in an ambulance. One of said gangsters is Frank Stallone who is suitably effective in the role even if it is rather brief. After the ambulance crashes and explodes Hawk shouts “are you guys ok?” which also made me laugh out loud. There are lots of practical explosions and a few fights too although by the end the movie has descended into what can only be described as a live action cartoon especially with Hawk’s final showdown with James Coburn’s George Kaplan.

Hudson Hawk has some of the most outlandish henchmen you’ll ever see like Kit Kat played by a career-best David Caruso, Andrew Bryniarski as the dullard Butterfinger, Don Harvey (also a Die Hard 2 villain trivia fans!) as Snickers and Lorraine Toussaint as Almond Joy.

Michael Kamen & Robert Kraft were on scoring duties and it was rather similar to Kamen’s other works like Lethal Weapon at times, but it works for this movie just fine even if it isn’t all that memorable.

Overall, Hudson Hawk is one of the strangest action comedies of all time and some moments work better than others but after all these years I think I have grown to sort of like it and just enjoy it for the escapist nonsense that it is and yet on other hand I kinda hate it too.