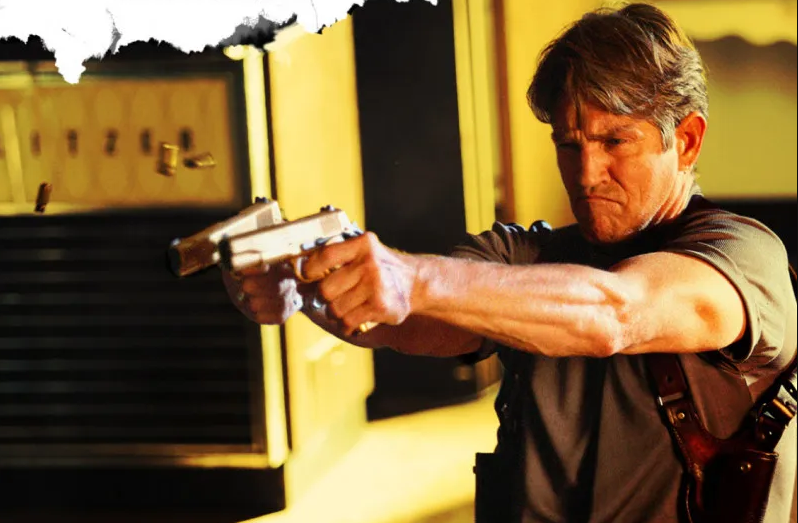 Looking Back at Jesse V. Johnson’s The Butcher

Plot: A mob enforcer is set up for a fall, but when he slips the trap he snaps and seeks retribution, living up to his moniker: The Butcher.

Before Jesse V. Johnson’s latest picture Hell Hath no Fury comes out I thought I would look back over one of his older films which I still maintain is one of his best – The Butcher. It has a cast of all-star badasses including Michael Ironside, Eric Roberts, Bokeem Woodbine, Keith David, Jerry Trimble, Vernon Wells, Robert Davi and Geoffrey Lewis.

Our protagonist is called Merle ‘The Butcher’ Hench and is played by Eric Roberts who brings his usual effortless cool and swagger to the role. Merle is a gangster who works for Mob Boss Murdoch (Davi) and he’s approaching the age when it’s time to retire; everyone keeps reminding Merle that he has essentially wasted his life and that he should have achieved so much more than he did.  He had potential as a fighter from a young age but he lacked that true killer instinct to go all the way.

While sent on a job to collect money from someone there is a heist and Merle gets the blame; the robbers drop one of the bags of money so Merle picks it up and ends up on the run from everyone with his waitress girlfriend Jackie.

The first half of The Butcher is admittedly rather slow and doesn’t have much in the way of action but patience is rewarded as anyone who is a fan of Jesse Johnson knows he likes to use real blood squibs of which there are many used in this movie; there is a rather epic shoot-out in the bar at the end and the movie has a pretty huge bodycount.

The performances are all first rate with Robert Davi never disappointing, but Roberts also makes Merle surprisingly sympathetic mostly due to the fact that there is nothing sadder than wasted talent. There is a quiet desperation to everything he does in this movie as he wants to help Jackie escape from her mundane life endlessly waiting on tables in a thankless job. It’s what is not said that makes the movie so enjoyable where we never know what Merle is thinking but that’s what makes him so interesting as a character.

This isn’t exactly huge budget fare but when the action hits it hits hard and there are some fantastic kills with the obvious highlight being a goon getting his head blown off with a shotgun.

Some of Jesse Johnson’s regulars show up including Timothy V. Murphy and Dominiquie Vandenberg; both will also star in Hell Hath no Fury due in November.

Overall, The Butcher may be a little slow to get going but it’s worth the wait as the climactic bar shootout is awesome and the performances from the cast are all magnetic. It’s on Amazon Prime if you haven’t seen it so it’s worth checking out.