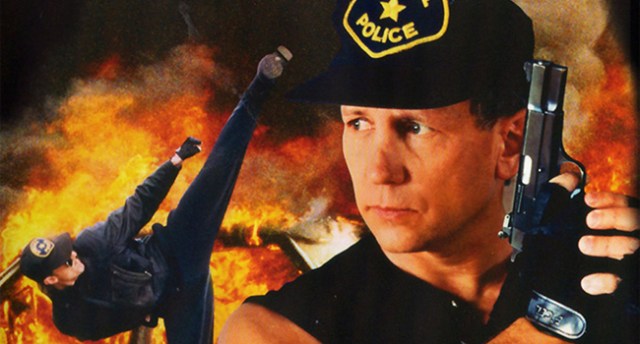 Plot: The last policeman (Ron Marchini) on future Earth helps a scientist (Carrie Chambers) look for a crystal that will transport them to safety.

Following on from Omega Cop, Karate Cop once again stars Ron Marchini as John Travis, the last policemen in a lawless post-apocalyptic future. This is pretty much the same movie with a super low budget, ridiculously over the top acting and outlandish characters.

The main scene stealer has to be Michael E. Bristow as the mutant henchman Snaker who spends the entire movie shouting and growling never coming across as especially intimating but definitely unintentionally hilarious.

The same can be said for the lead villain Lincoln played by D.W. Landingham who cackles maniacally for no reason but he looks like he is just enjoying the ride.

The posters advertised David Carradine but it’s really just an extended cameo as he plays a barman with a short life expectancy.

Like Omega Cop this is super low budget and yet it has plenty of action including fight scenes, shoot outs, explosions and chases.

Marchini was only in a handful of movies and he not have been the greatest actor in the word but he looked the part in the fight scenes and made for a likable enough protagonist.

Karate Cop is a movie that requires multiple beers for maximum entertainment value and is another picture that has been riffed by MST3K under the Rifftrax name.

I was reading on IMDb that Ron Marchini “survived a drive-by shooting during production. Following a day of filming, Marchini and his wife were walking in Grupe Park (Stockton, California) when a car pulled up to the couple and both were shot at from the backseat by an unknown individual. Neither were injured.” I would love to know the backstory of what was going on there…

Overall, Karate Cop is an easy movie to watch if like me you enjoy low budget post-apocalyptic movies like Omega Cop; it’s not a good movie by any stretch of the imagination but it is still a fun time.