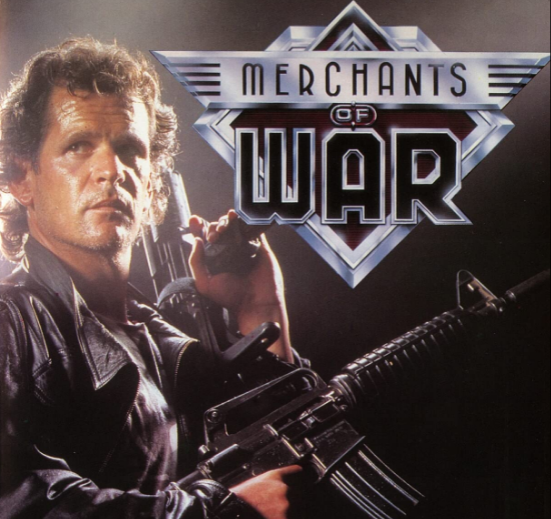 Plot: An ex-Vietnam veteran and ex-CIA operative is assigned to a photo reconnaissance mission in Angola.

After revisiting American Eagle a few weeks back, I thought it was time we looked at Merchants of War also starring Asher Brauner (who I only recently found out passed away in January, R.I.P.).

In Merchants of War a group of commandos are sent on a covert mission by the CIA. The mission is a success, but they incur the wrath of the world’s most feared terrorist, when they set out to do one last mission but as with everything in life it doesn’t go as expected.

Brauner plays Nick Drennen who is captured by the extremist villains; one of them is named Abdul who is sporting an epic afro wig for some reason. While imprisoned Nick befriends a boy he names Bugsy (because he can’t pronounce his name) who would later help him escape.

Merchants of War is reminiscent of so many other movies in the 80’s and it’s another trapped behind enemy lines story but who doesn’t love them? This is a pretty low rent version with some dodgy acting but the action is still relatively slick.

I’ve heard some say this is better than American Eagle but I’d have to disagree; although there is action in this movie I found it less interesting and at times it did tend to drag.

There are of course squibs, lots of guns and a few explosions as well as a cool opening tune (which also isn’t a patch on American Eeeaaagle) but the overacting from some of the cast is spectacular. I love the scene which starts with the three friends shouting at each other about going on the mission and it feels little like amateur drama class but that’s kind of why it’s amazing at the same time.

There is a brief scene featuring a flamethrower which could have been put to better use; I’ve said it before but we don’t get enough flamethrowers in movies so it feels like a missed opportunity.

I love how the finale takes place at a convention filled with bad guys; one of them is giving a speech about how America is evil and that they are the real enemy but Nick and his crew show up with machine guns and kill lots of people because ‘Murica! Hell Yeah! That’ll make them love you, now…

Also did I hear correctly that there is a character called Vincent D’Onofrio? This was back in 1989 so he wasn’t exactly a big name then…

Overall, Merchants of War is fun B movie fodder with a ragtag group of drunks saving the day and gunning down nameless goons in true 80’s fashion. I personally prefer American Eagle but this is a good time as well, especially Abdul’s distracting hair.