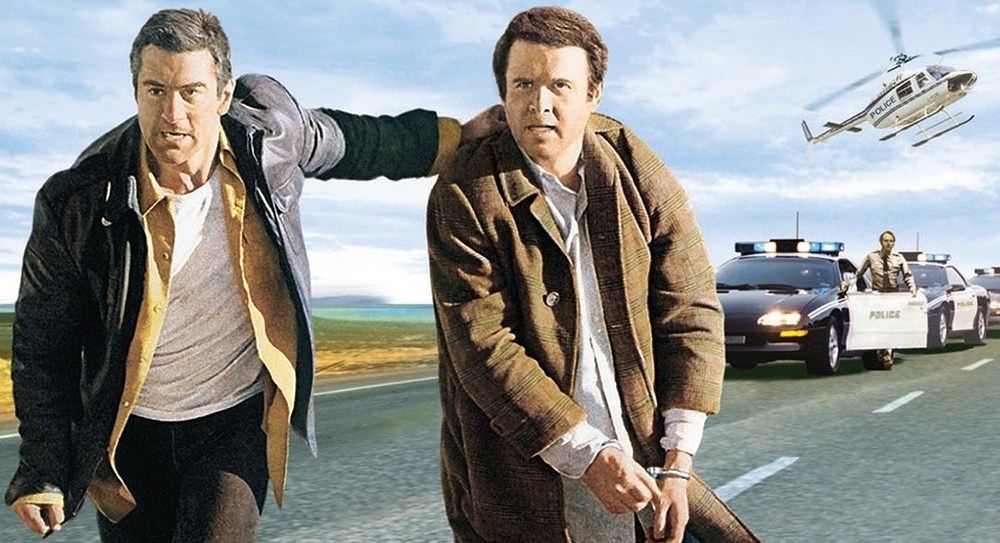 Plot: When Eddie Moscone (Joe Pantoliano) hires tight-lipped bounty hunter Jack Walsh (Robert De Niro) to locate a mob accountant named “The Duke” (Charles Grodin) and bring him to L.A., Eddie tells Jack that the job will be simple, or a “midnight run.” But when Jack finds The Duke, the FBI and the mob are anxious to get their hands on him. In a cross-country chase, Jack must evade the authorities, hide from the mob and prevent The Duke’s erratic personality from driving him mad.

After the recent passing of James Grodin, it seemed like a fitting time to revisit one of my favourite movies, the action comedy Midnight Run starring Grodin and Robert De Niro.

I’m not going to go into the story as it’s literally written above so I’ll just go straight into how much I love this movie and it’s simply the kind of film we don’t really see anymore. Everyone smokes, shouts and swears constantly and the script is practically perfect. The relationship between Duke and Walsh is what drives the plot forward where at first they can’t stand each other but the more time they spend together they understand their motivations for the lives they have led.

Grodin and De Niro had immediate onscreen chemistry and I always find Grodin had humour in his eyes, especially the (mostly improvised) scene where he is pretending to be an FBI Agent in the bar. I always think he’s trying not to laugh which makes it even more entertaining.

Every scene with De Niro and Joe Pantoliano on the phone has me in stiches and they just scream abuse at each other; people screaming at each other shouldn’t be as enjoyable as this but for me it just works.

Jack Walsh is one of my favourite De Niro characters as there is a lot to him; he’s sort of self-righteous but he sees everything and everyone in the world as bad which essentially leaves him alone but it takes him meeting the Duke to see the decency in people again. The scene with his ex-wife and daughter is surprisingly moving and adds real pathos to the story.

Yaphet Kotto who also sadly passed away recently is perfectly cast as FBI Agent Alonzo (who Jack steals his I.D. from); he always looks like he has this simmering rage bubbling under the surface. Then we have the late, great Dennis Farina who was always a scene stealer in movies like this and Get Shorty. There was something about the way he could swear or insult people which cracked me up.

In terms of action we’ve got several shoot-outs, exploding helicopters and people regularly being punched in the face. There are some impressive stunts throughout but for me it’s the dialogue and characters that makes this movie such fun. There were several sequels without De Niro or Grodin which had their moments but never quite captured the same magic.

It didn’t sound like it had been all that fun a movie to shoot as Yaphet Kotto (who had a fever throughout filming) commented in a 2015 interview: “Midnight Run was practically the most difficult movie I ever made. Marty Brest doesn’t do one take. He shoots a lot of footage, one take after another, all kinds of different ways, experimenting to see if something extraordinary happens. Then even if it does he’ll try something else. […] I didn’t know whether it was a comedy or a drama. It could go either way. What I was surprised about is what I thought was going to be funny was funny, and what I thought was going to be dramatic was even funnier”.

John Ashton is a lot of fun as Marvin and he of course had worked with director Martin Brest in Beverly Hills Cop. He spends most of this movie getting punched in the face (apparently for real) by De Niro which once again provides plenty of laughs.

The last movie Martin Brest directed was the 2003 flop Gigli which this day I’ve never watched but I haven’t seen or heard much from him since. Too bad as he has made some great movies like Beverly Hills Cop, Scent of a Woman and Meet Joe Black. I was reading that after the crew quit after 5 weeks on this movie he stated “My job is to create an environment where people can do their best work. Therefore, it’s essential you share a common attitude with your collaborators. Generally, my instincts about who I’m compatible with are pretty good. This time, I made a mistake.” So… yeah, sounds like a fun time.

You could have a drinking game for this movie where anytime someone says “fuck” you take a shot, however, considering the word is used one hundred and nineteen times then you’d likely end up in hospital or dead.

To this day I still can’t believe that was Danny Elfman doing the score; it’s miles away from his Tim Burton-esque music he would be known for in the 90’s but it has upbeat brass and cool electric guitars. Sometimes it’s a little too lighthearted considering what’s happening on screen but I do still like it a lot.

Overall, Midnight Run has the right amount of comedy, drama, pathos and action to still stand up as a great movie to this day. The cast and script are faultless and I watch it regularly and will continue to do so for many years to come.