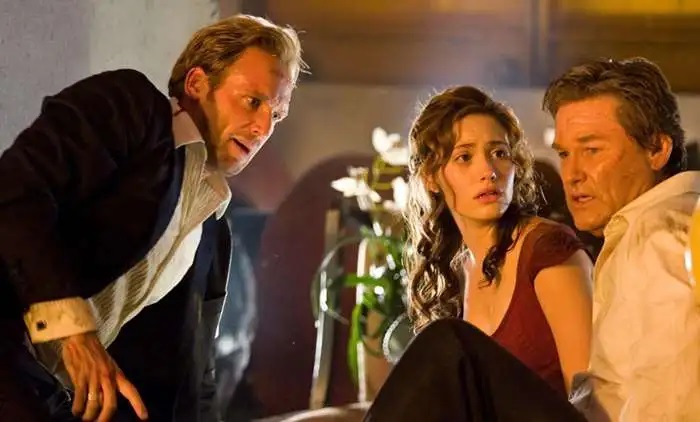 Plot: After a huge tidal wave capsizes a luxury liner in the North Atlantic, individual survivors (Josh Lucas, Kurt Russell, Jacinda Barrett) band together and traverse a hazardous upside-down maze that they hope will take them to safety. As the wrecked vessel fills with water, the survivors must call on hidden strengths and skills to face the fight of their lives.

Believe it or not I had never bothered to watch Poseidon until this past weekend; I always loved The Poseidon Adventure starring Gene Hackman, so I didn’t see the point in this remake. I’m glad I did eventually sit down and give it a chance as it’s a fun disaster movie with a decent cast that includes the always reliable Kurt Russell as well as Josh Lucas, Richard Dreyfuss and Emmy Rossum.

Poseidon is directed by Wolfgang Peterson who I consider rather underrated as he also helmed classic films like Das Boot, In the line of Fire, The Neverending Story and even Air Force One which I find a guilty pleasure; he knows how to do a set-piece and Poseidon isn’t short of spectacle.

It’s around 98 minutes long so it doesn’t get too bogged down with silly things like characterization or realistic dialogue; it gives us the usual cardboard cutouts who we tick off until they meet their eventual unpleasant demises however, I did find I liked the cast and wanted them to survive which is rare in these kinds of movies. The only character you are made to hate is Kevin Dillon’s jerkish Lucky Larry who isn’t quite as fortunate as he thinks he is but the rest of the cast are surprisingly sympathetic.

The capsizing sequence is for the most part impressively done and manages to create a suitably hellish scenario where our band of survivors try to make it to the bottom of the ship (which is now the top) and find safety. Not everyone will make it of course and (spoiler alert) it bothered me greatly that Kurt Russell had to sacrifice himself for the greater good but it was a hero’s death. It was very well done and I don’t know how they actually made it look so convincing as it was genuinely upsetting to watch. I thought the meanest death was poor Valentin who falls and gets impaled which he really didn’t deserve but it certainly guarantees you are emotionally engaged. The kid Conor (Jimmy Bennett) was quite the hero but I still don’t understand how he ended up separated from his mother in that stupid cage.

There is some CG especially the explosions but the effects mostly hold up and I’ve seen a lot worse. The pacing keeps things relatively tense and the ventilation shaft scene is the stuff of nightmares; it’s tough to sit through as it’s one of the most desperate moments of the film.

Overall, Poseidon may not reinvent the disaster genre but it’s a fun ride with several harrowing moments and regular explosions; the cast do their best with the rather one note characters but they are at least mostly sympathetic and Kurt Russell automatically makes any movie better.