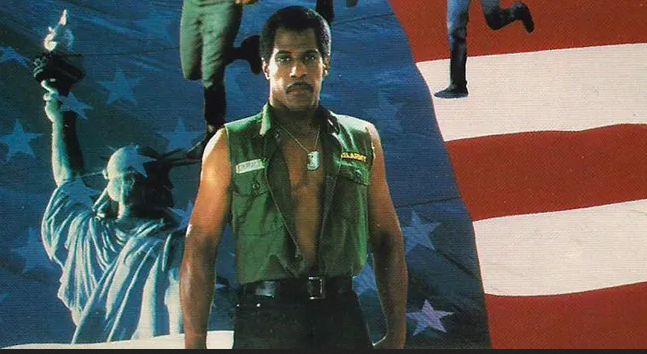 Looking Back at Riverbend (1989) with Steve James

Plot: A black major (Steve James) and his men are on the run from a rigged court martial and hide out in a small Georgia town where a cruel white sheriff is terrorizing the black population. Together with one strong-willed woman they formulate a bold plan to fight for freedom and human rights…

If ever there was a talent that was taken from us too soon it was Steve James; known mostly for his roles in the American Ninja movies and Avenging Force (usually as a sidekick who stole the show) one of my favourites has always Riverbend from director Sam Firstenberg where James takes centre stage as the lead.

The story is every bit as relevant as it was back in the 80’s with a group of black soldiers coming back from Vietnam and hiding out in a small town only to discover it’s being run by the racist Sheriff Jake (Tony Frank). Steve James plays the leader of the men Maj. Samuel Quentin who decides to lead the black townsfolk to take over and hold the white residents hostage until the Governor brings the TV stations in to show how corrupt the Sheriff is.

It’s incendiary stuff and I haven’t hated a character so much in a long time like I do Sheriff Jake who is just a racist scumbag; watching him getting beaten up throughout is incredibly satisfying but I was disappointed he didn’t die in the end as he truly deserved it.

This is a well-paced 95 minutes with regular action including fights and shoot-outs; the sheer tension throughout kept me engaged from beginning to end.

At one point you can see a boom mic so it’s low budget stuff but it’s still a riveting watch. Steve James is as magnetic as always and the constant conflict between Quentin and his colleague Tony (Julius Tennon) adds to the tension with the two of them eventually coming to blows.

Overall, Riverbend may have a low budget but its tale of racism is still as prevalent today as it was back in 1989 but it also has plenty of action too; it deserves a Blu-ray as I’ve only ever seen it on VHS and would enjoy seeing it in HD.