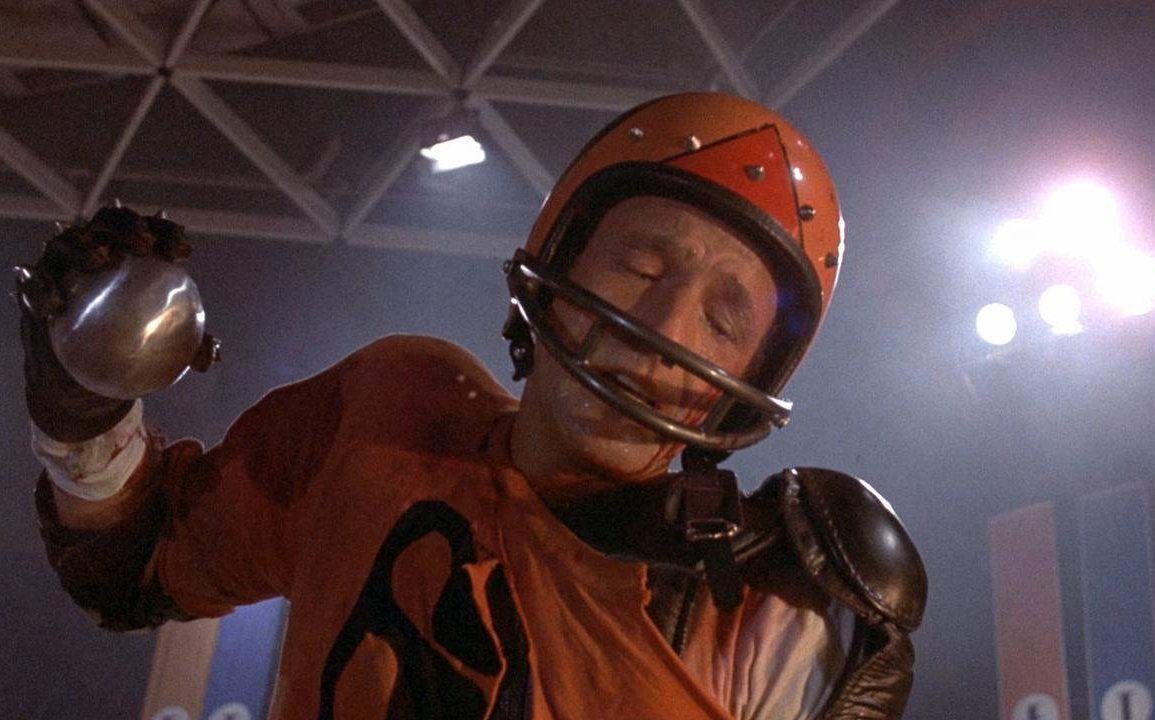 Plot: The year is 2018 in a futuristic society where corporations have replaced countries. A violent futuristic game known as Rollerball is the recreational sport of the world, with teams representing various areas. One player, Jonathan E., fights for his personal freedom and threatens the corporate control.

Next up on our James Caan tribute is the dystopian sci-fi classic Rollerball set in the distant future of… 2018. Movies in the 1970s were filled with nihilism generally painting a bleak future and in Rollerball it shows a one where individualism is frowned upon and corporations have taken over from governments… so not a million miles away from where we are today. The difference is from the usual dystopian films of the time is that the future shown here isn’t that ugly with many living a life of luxury but personal freedoms like choice have been taken away.

The masses are entertained by Gladiatorial games called Rollerball which is a vicious contact sport where hurting and killing other players is encouraged. The players in the Rollerball games aren’t allowed to go above their stations and if they do it’s time for them to lose.

James Caan plays Jonathan E., the champion of all Rollerballers who lives for the game and up until now has been happy to play by the corporations’ rules. Even after his wife was taken away by an executive Jonathan accepts his place but when they decide it’s time for him to retire, he relents and slowly begins to defy the system.

Caan gives one of his most restrained performances here where he is calm (to the point of docile) rarely showing any emotion because people in this future are encouraged to bury their feelings.

The Rollerball scenes themselves are still incredibly well orchestrated showing what a brutal game it is and we get some nice moments of violence and impressive stuntwork especially in the final game. Some have said that all the stuff in-between the games (like characterization and plot) are boring but it’s all building the world and showing us Jonathan’s journey from pliant drone to rebel with a cause.

The set design and costumes are very much of the time but that’s part of why I love the film as the 70’s had some really groovy colour schemes with the houses looking bright and appealing. It’s all a facade of course as no one is really free especially women who (as I stated above) can be taken away on the whim of an executive.

The excellent supporting cast includes Maud Adams as Jonathan’s wife Ella and John Houseman as the scheming and hateful executive Bartholomew; I’ll always remember him as Mr. Machen in John Carpenter’s The Fog.

Overall, Rollerball has some interesting and timeless ideas and the game scenes are packed with brutality, violent kills and explosions to satiate most action fans. James Caan gives a restrained performance which critics at the time didn’t appreciate but as the years have gone on I think more people have grown to enjoy this film. There was a remake directed by John McTiernan of all people but I’ve never bothered to see it as there was nothing wrong with this film in the first place to warrant it.