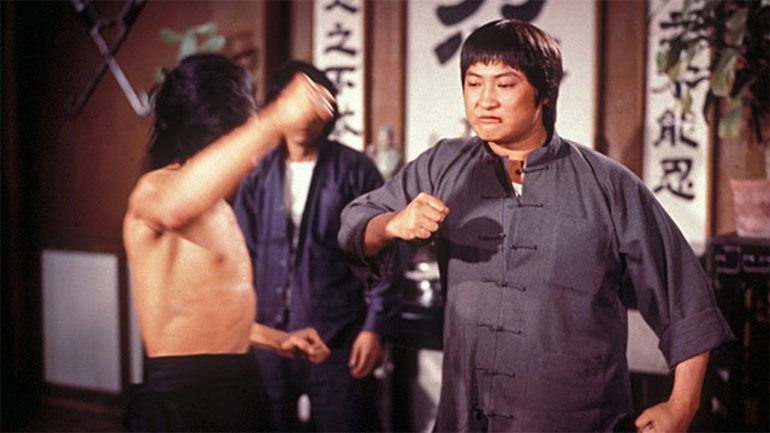 Looking Back at Sammo Hung’s Enter the Fat Dragon

With the upcoming Donnie Yen iteration of Enter the Fat Dragon coming soon I thought now seemed like the right time to revisit the Sammo Hung film of the same name.

It doesn’t have much in the way of a plot but basically it’s about an apprentice farmer called Ah Lung (Sammo Hung) who ventures to the city and helps his family battle a gang of thugs.

Ah Lung is a huge fan of Bruce Lee who is his idol and he has mastered his fighting style after him. There are some amazing kung fu sound effects with Hung really mastering many of Bruce Lee’s mannerisms which provide many of the laughs.

There’s no real sense of urgency to it and it’s mostly an excuse for Sammo Hung to show off his rather impressive martial arts skills as he takes on various goons around the city.

Enter the Fat Dragon is a parody of the Bruceploitation movies which exploded in the 70’s after Bruce Lee became a martial arts sensation but it’s also a nod to Way of the Dragon (and Enter the Dragon obviously).

I never really considered Sammo Hung to be “fat”… come to North America and we’ll show you fat; in this movie especially he barely has a gut but boy can he move.  The fight scenes still hold up and the final 15 minutes has Ah Lung take on 3 martial arts experts one by one which is humorous but still impressive to watch. Yes, a lot of the humour is rather lame now but at the time it was very entertaining.

I was reading on IMDB that the Asian actor dressed up as the black American fighter towards the end of the movie is a parody of Hollywood’s casting during that time. Hollywood often cast white people to play Asians, so they cast an Asian man to play a black American. Watching the movie now I’m sure the majority of people would find it offensive but it was very much of the time.

I loved how at several points a crowd has gathered to watch scenes being filmed so during various fights there are masses of people in the streets so it feels almost like guerrilla filmmaking.

Hung directs and stars and Enter the Fat Dragon was proof that he was about to become a legend of action and it’s great to see him still kicking ass all these years later. If you watch this movie for the first time now you would probably find it rather lame but if you love classic kung fu flicks then you’re in for a treat.