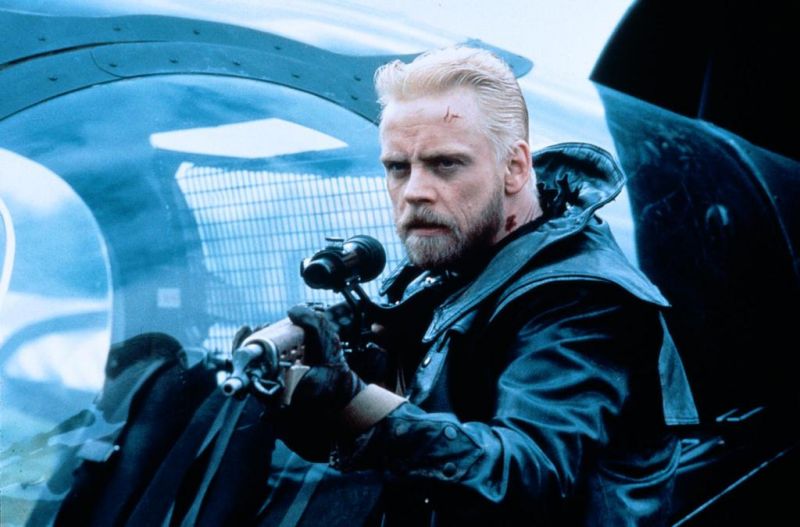 Plot: An adventurer (Bill Paxton) frees a prisoner (Bob Peck) from a lawman (Mark Hamill) of the future, on an Earth washed by a river of wind.

I remember when Slipstream came out way back in 1989 it got generally negative reviews and due to the poor box office in the U.K. it never even received a theatrical release in North America. After revisiting it I can understand why; it hasn’t even garnered much of a cult following over the years but I saw it on Tubi (my favourite streaming channel) the other day and thought I would revisit it as I couldn’t even remember if I had seen it before.

Mark Hamill looks cooler than ever in it with his dyed blonde hair and beard but he isn’t in the movie enough and is really more of a supporting character even disappearing in the middle of the movie only to show up for the finale. Bill Paxton is actually the lead and he never disappointed giving the movie much need personality and Bob Peck shines as the android known as Byron learning to be human.

The only problem is I didn’t care about any of the characters and more importantly it’s one of the most tedious movies I’ve seen for some time. There is little in the way of action aside from a couple of shoot-outs, but you can’t help feeling that the movie doesn’t know what it’s trying to be – a sci-fi action film? A meditation on what it means to be human? Whatever it was trying to be I thought Blade Runner did it better.

There is an impressive supporting cast including Robbie Coltrane and Ben Kingsley, but they are wasted in thankless roles that make little impact.

The film lacks any real tension or excitement and although there is a longer cut (a Japanese release I believe) I have no interest in watching it as it’s just not an interesting enough concept.

Elmer Bernstein provides the sweeping music score which makes the film seem more exciting than it is but it’s definitely a highlight even if it feels like it belongs in another picture. There are also some nice 80’s tunes which work well with the soaring glider sequences.

There are a few intriguing ideas here and like I said Mark Hamill looks awesome in it and totally unrecognizable as the villainous bounty hunter Tasker but there’s not enough to recommend viewing.

Overall, Slipstream is best left forgotten as aside from a couple of fun set-pieces and a decent cast it’s generally a dull affair with a ponderous pace that will leave most action fans bored out of their minds.