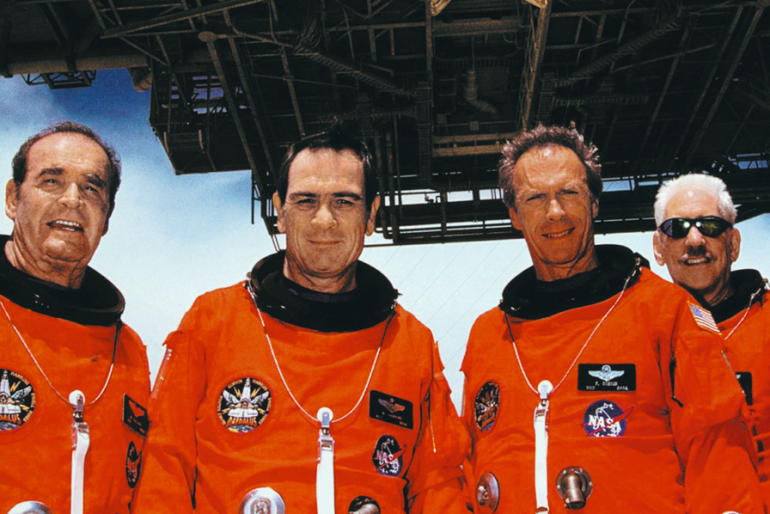 Plot: Clint Eastwood, Tommy Lee Jones, Donald Sutherland and James Garner star as a group of pilots whose time has come to serve their country and fulfill their dream of going to space. In 1958, the members of Team Daedalus, a group of top Air Force test pilots, were ready to serve their country as the first Americans in space. When NASA replaced the Air Force for outer atmospheric testing, they were pushed aside for a chimpanzee. The team retired, but the dream of going into space never died.

How on Earth did this movie get to be 21 years old? It just seems like 2-3 years ago when it came out.

Space Cowboys isn’t exactly packed with action but there are a few fist fights and the finale in space is suitably thrilling. It’s the cast that make this so endlessly watchable; Clint Eastwood, Tommy Lee Jones, James Garner and Donald Sutherland are all at the top of their game with Sutherland nearly stealing every scene as the lady’s man Jerry O’Neill.

James Garner is a little underused as the former pilot turned man of the cloth Tank Sullivan, but it was a nice reunion after Eastwood guest starred in Maverick back in 1957. He also starred opposite Sutherland in the classic Kelly’s Heroes.

It’s the relationship between Eastwood’s Frank Corvin and Tommy Lee Jones’ Hawkins that is the most engaging. Both men are as gruff and stubborn as can be with their egos constantly battling against each other. As expected, there are some choice lines of dialogue with Eastwood of course having the best one-liners and there is something endearing about old timers having to save the day.

The supporting cast includes James Cromwell as Bob Gerson who has his own motivations for wanting to rescue the falling satellite. William Devane is an underappreciated talent and he is so perfectly cast as Eugene Davis who seems to find it impossible to chew gum with his mouth closed but it just adds to the character.

Keep your eyes peeled for a young Jon Hamm (Young Pilot #2) who made his theatrical debut with this film.

This is more about the people and dialogue rather than constant action but it manages to always engage and never be dull. Sure, the concept is silly but it’s pure escapism and with that cast it’s hard not to just sit back and enjoy the ride.

The visual effects are impressive and for the most part hold up; the faces of the actors were CGI’d into the space scenes and it still looks believable. Eastwood didn’t initially plan on directing but he couldn’t find anyone who would direct the space scenes as they thought it would be too difficult so he took it on himself.

*Spoiler Alert* I always thought the choice of music at the end was strange as it was very upbeat while showing us Hawk’s body on the moon; I think a more somber orchestral theme would have worked better, but that’s just me.

Overall, Space Cowboys may not be packed with action but it has its moments and the cast alone make it essential viewing with heartfelt moments in between the banter.