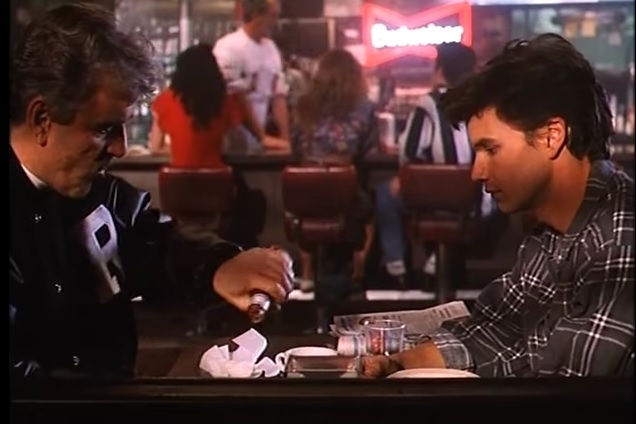 If ever there’s a recipe for awesomeness it’s the name PM Entertainment but Street Crimes also has a cast that includes Michael Worth and the late, great Dennis Farina.

Street Crimes is a fascinating entry from PM and was before their bigger budget action fare.  It’s about two cops – one with a gun called Brian (Farina) and one with his fists called Tony (Worth), who risk everything to make the neighborhood crime and drug free by taking down the most powerful street lord who just so happens to be a former childhood friend of Tony’s.

What’s interesting about this movie is that it actually has a really good story and characters who aren’t just invincible badasses but are normal everyday people. The cops are assholes (especially Flannigan) who feel believable as they bust each other’s balls constantly and especially give Tony a hard time because he’d rather not shoot people but try to take them down with his hands. Tony kind of deserves it though as he screws up in the opening scene when he’s trying to buy a new car which is rudely interrupted by some robbers who kill the staff. Tony acts but doesn’t save anyone and even allows the main bad guy to drive off with one of the cars and we never hear from him again. Nice one, Tony…. Maybe McDonalds are hiring.

Tony’s quite difficult to take to and is a bit douche-y at times but he has a pure heart and is addicted to discipline as he never wants to end up like his parents who were “drunken losers”. He also falls for his partner’s daughter who is blind which was handled in a surprisingly sensitive fashion making their relationship dare I say it, sweet.

Dennis Farina’s slightly bitter cop Brian is overly protective of his daughter as he lost his wife in an accident and doesn’t want to lose his little girl either. We get a few nice scenes between partners where Brian tells Tony to treat his daughter properly or else.

So several paragraphs in, Eoin and no one has punched anyone in the face. What the hell? I’m getting there, imaginary friends so don’t worry.

Despite having a genuinely entertaining story there is no shortage of fight scenes as the cops start nightly fights between themselves and the local criminals. This is seen as Tony’s idea and former enemies become allies but this displeases local crime lord Gerardo (James T. Morris) who grew with Tony and doesn’t like the fact that he is losing business as everyone is watching the fights rather than buying his crack. He’s just trying to make a living, people!

Anyway there are fight scenes every few minutes, rad early 90’s electric guitar/saxophone music and it has an engaging story with memorable characters. If you haven’t seen Street Crimes I’d seek it out as it’s better than you’d expect and never less than entertaining.