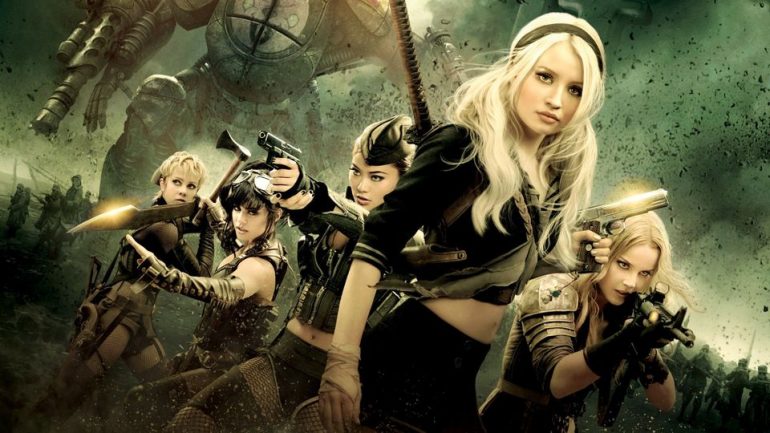 Looking Back at Sucker Punch (2011): The Extended Edition

Plot: Locked away, a young woman named Babydoll (Emily Browning) retreats to a fantasy world where she is free to go wherever her mind takes her. Determined to fight for real freedom, she finds four women — Rocket, Blondie, Amber and Sweet Pea — to join together to escape the terrible fate that awaits them. With a virtual arsenal at their disposal, the allies battle everything from samurais to serpents, while trying to decide what price they will pay for survival.

To this day I’m still not sure how I feel about this movie; I watched Sucker Punch when it first came out 10 years ago in 2011 and I remember not particularly liking it, so I had little inclination to watch it again. Then for some reason I saw the extended edition Blu-ray for 3 bucks and figured I would give it another shot.

This Extended Edition has over 17 minutes of cut footage restored and is R-rated; I was always surprised the theatrical cut was rated PG-13 as this is not a kids movie. Looking at the trailers you’d think it was a male fantasy with hot girls fighting lots of CG robots, monsters etc. but when you see the film itself it’s a far darker tale exploring abuse and oppression.

I’ve enjoyed reading people’s different interpretations for the movie and what they take away from it like how it explores the human psyche, our choices and how we can hold ourselves prisoner in our minds. You can take any of these (and more) from it or you can just enjoy it for the eye candy like the set design and colourful visual effects.

The extended cut contains more violence (obviously) and there are more weapons used (like cutting tools) in the action scenes; there is a little more of the attempted rape and general humiliation of the girls which only adds to the film’s unpleasantness. The second adventure at the castle is longer with more orcs/goblins and even more blood.

The performances are all solid and I thought Oscar Isaac was despicable as the sadistic Blue; Scott Glenn is also a welcome addition to any movie. Emily Browning is well cast as Babydoll although I find it odd that while she is awaiting to get a lobotomy she fantasizes about being in a bordello where her and the other girls are abused. I mean, who does that? Anyway it worked for the film I guess…

In the theatrical cut there was little mention of Babydoll’s virginity being sold to the High Roller (Jon Hamm) and how it was actually about her getting a lobotomy but that is more apparent and there are some more plot elements to make the story flow better.

This being a Zack Snyder film there is plenty of slow motion and style which has become his signature over the years but by the time we reach the end credits I still find myself feeling nothing.

There has been talk recently that an even longer cut exists but I don’t think it’s really necessary as this is quite long enough. I generally find this a joyless movie that essentially leaves you with nothing at the end and it deals with a dark subject matter that for me at least doesn’t make for entertainment; if I want to be miserable I’ll look at my bank balance.

What do you think of Sucker Punch? Like it? Love it or Loathe it?