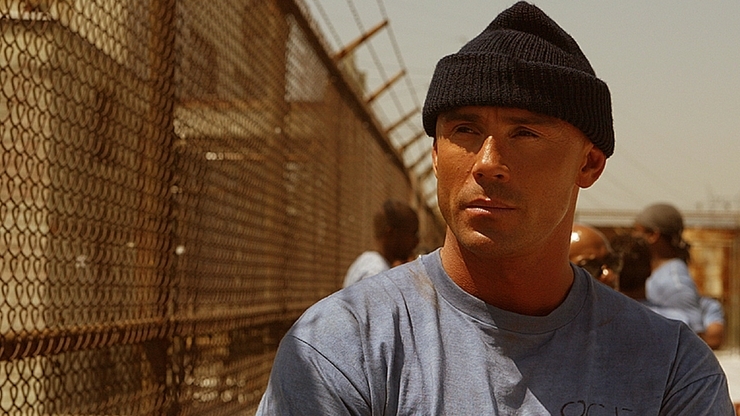 Looking Back at The Circuit Trilogy with Olivier Gruner

I’ve been going through a fighting tournament movie phase recently so I thought I would revisit The Circuit trilogy starring Olivier Gruner but also starring Loren Avedon in the first and second entries as well as Lorenzo Lamas in part 2.

Plot: Although Dirk Longstreet (Olivier Gruner) lives a quiet existence as a college professor, he used to be the champion of an underground fighting club in Los Angeles known as the Circuit. Men battle to the death as money passes from one unscrupulous gambler to another — this was the world Dirk hoped to escape forever. But when he hears that his brother, Jeremy (Ilya Morelle), has entered the Circuit to fight for money, Dirk decides he must return to the arena to protect his brother.

I’ve always enjoyed fighting tournament movies and The Circuit with Olivier Gruner may not have had a huge budget but it had plenty of fight scenes. Rather than flashy martial arts this goes for the more MMA style of fighting with grappling, punching and kicking making the fights more believable.

Gruner was always very sympathetic on screen and his amazingly named character Dirk Longstreet is one of his best. His brother Jeremy (Ilya Morelle), is kind of a dick and never comes across as especially likeable so we never really care if he lives or dies. Thankfully he has a nice brother in Dirk who will stop at nothing to free him from The Circuit – an illegal underground fighting ring where bones are broken and if you lose you die.

The Circuit has an awesome supporting cast including Billy Drago in a rare good guy role, Loren Avedon who is shamelessly underused as an FBI agent and he has no action scenes. Then we have Jalal Merhi who also directed the trilogy; he also has no action scenes but has a small role as a newspaper editor. Brian Genesse is well cast as the man behind The Circuit Vixton Hack who is as ruthless as they come. His current champion Kwan (Simon and James Kim) is truly hateful too and his secret is exposed during the final showdown with Longstreet making for an entertaining battle.

The music is mostly horrible but it is a product of the time period and works well enough for the fights.

Plotwise we’ve seen this kind of movie a thousand times before but I do love straightforward fight flicks like this. There is no great emotional drama in it; just lots of people getting punched and kicked so it delivered everything I wanted.

Overall, The Circuit makes for a solid tournament movie with Olivier Gruner proving an engaging lead who still has the moves but it also has a great supporting cast making this a fun time for fight fans.

Plot: Prisoners are dying at the Ogden Correctional Institution, a prison where a corrupt Warden has taken justice and business into his own hands. In the bowels of this prison, an underground fighting society has been formed. The Circuit is flourishing until investigative reporter Nicole Kent is thrown into the mix, and into Pike’s cell where she is viciously attacked and left for dead. Enter Dirk Longstreet. Dirk, who was once a fighting champion on the Eastern seaboard circuit, now has to sit idly by as his girlfriend fights for her life. Dirk decides to fight for revenge.

The second entry in the series might well be my favourite of the trilogy; it’s more intense and feels like a cross between Undisputed and Death Warrant with Dirk Longstreet (Olivier Gruner) going undercover (despite not being a cop) into a prison to find out who raped and left his lady for dead.

Along for the ride is Lorenzo Lamas who doesn’t have much in the way of action but the highlight of the entire movie is Lamas and Gruner street fighting with some thugs.  No Loren Avedon this time but do keep your eyes open for Art Camacho and Larnell Stovall as fighters in the prison.

Jalal Merhi once again directs and has his small role as the newspaper editor again but he literally spends the entire movie making phone calls so no action for him.

There are still plenty of solid beatdowns with Gary Hudson (Martial Outlaw) playing one of the sadistic guards who organizes the battles between the inmates with Jim Shagen playing the current champion Pike. He just so happens to be the man who attacked Longstreet’s woman so you just know the final fight will be awesome. It’s pretty satisfying but I thought the fight in the ocean (don’t ask how they end up there) was a little frustrating as you could clearly see the hits not making contact although to be fair, choreographing a fight in the sea wouldn’t be easy.

I noticed in the end credits that Olivier Gruner actually piloted one of the helicopters which is rather cool so he is far more than just the film’s protagonist. He seems to put his all into his movies so respect is due for that.

Michael Blanks has a sizeable role as Black Jack who becomes one of Longstreet’s allies in prison and he made for a badass sidekick.

It’s too bad Brian Genesse didn’t return for this one as he was arrested at the end of the first movie and said he would start is own circuit in prison; it was all laid out but then he didn’t come back.

Overall, The Circuit 2 is packed with brutal fights and the awesome pairing of Olivier Gruner and Lorenzo Lamas. I do wish they had more scenes together especially kicking ass but what we got was still entertaining.

Plot: The film picks up where Dirk Longstreet left off in part 2. It seems like his girlfriend did not survive that coma she was put in by that film’s villain, and Dirk has given up, living a nomadic lifestyle completely off the grid out of his van, searching for the next great wave to ride. He supplements this lifestyle through illegal underground fighting, which we see at the beginning.
Anyway, while surfing, a young girl who was sold by her step-dad to white slavers escapes to the beach, Gruner saves her, and a bond forms. When she’s captured, Gruner must fight again to save her. Of course, what he does not know is his wife is actually alive, but his off-the-grid life means no one can tell him.

The third and final entry in The Circuit trilogy is a generally unsatisfying ending with a sort of cliff-hanger which never gets resolved. In the second move Dirk’s lady is left in a coma, he thinks she is dead but she has actually been put into protective custody by the FBI (courtesy of Loren Avedon who returns albeit briefly). You know it’s a bit of a half assed affair when there is a typo in the opening credits and it literally says Lorne Avedon rather than Loren. Then in the end credits it spells his last name ‘Avidon’. I think someone had it in for him…

Anyway, the story to Street Monk (as is its subtitle) isn’t all that interesting and it lacks the intensity of the second movie. Dirk is living in a trailer and spends his days surfing but is interrupted by a girl needing help as she is being chased by goons. He beats them up with his surfboard and then they start hunting him and the girl down.

The villain this time around is the wonderfully monikered Octavio Ventura (played by a mustache twirling Jason Carter). He’s more nuts than a six pack of Snickers and has no problem shooting his own men whenever they fail. We are under no doubt that he is the antagonist and he is truly hateful. James Lew also gets to played Stuart “The Spider” Webb who is the new champion so obviously Dirk will have a showdown with him. It’s not bad but the fights this time around rarely convince, and everything looks cheap; they’ve obviously run out of budget by this stage and you can tell.

Dirk has really changed as a character too; in the first movie he is willing to help people and is generally a good guy. In the second movie he is angry after what happened to his girlfriend but by this stage, he is barely even civil to anyone especially Cherrie (Cristina N. Rose) the young girl who needs his help. He’s not as likable this time around but after all the shit he’s been through it’s understandable why he doesn’t want to get close to anyone again as any time he does they get hurt or killed.

Despite the flaws The Circuit 3 is still a fun time if you enjoy B-movies like I do; there is no doubt Olivier Gruner looks the part in the fights too and he really has the moves. The highlight of this movie is Longstreet getting his revenge on some surfers and drowning them one by one. He really kills a lot of people in this movie so I guess it makes sense he is a fugitive at the end.

Overall, The Circuit 3: The Street Monk isn’t without its moments with a few fight scenes that entertain but they aren’t all that amazing and it looks like they ran out of budget halfway through filming. Still, fans of fight flicks and Olivier Gruner may still enjoy it.

So that’s the three movies covered but I only found out recently that there is also a TV series coming in 2021 and you can check out the trailer below. This might explain the cliff-hanger at the end of Circuit 3.

SYNOPSIS: The Circuit is an Hour long drama that could best be described as THE FUGITIVE meets KUNG FU. It’s the story of Dirk Longstreet, a full contact fighting champion, who is haunted by his past and on the run from an evil cartel boss, Octavio, who will stop at nothing to find him. Unbeknownst to Dirk, he’s also being tracked by an FBI agent desperate to get him to help bring Octavio down. Driven by his sense of justice and honor to do the right thing, despite his vow to turn his back on violence, he will become a reluctant hero, who constantly finds himself helping those in need. A one man wrecking crew, with superior intelligence, and a sense of fearlessness that is awe-inspiring, he will travel the country aimlessly, and become nothing short of a legend.