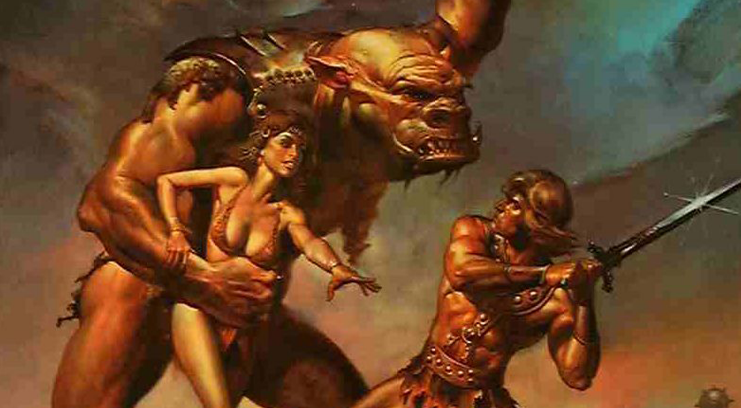 Looking Back at The Deathstalker Series

Before Game of Thrones there was a period in the 80’s when we would see more adult orientated sword and sorcery movies like Conan the Barbarian, The Sword and The Sorcerer and of course the Deathstalker franchise. They featured scantily clad maidens, gratuitous nudity and some quality gruesome kills. Today we’re going to look at the Deathstalker series and how they hold up. 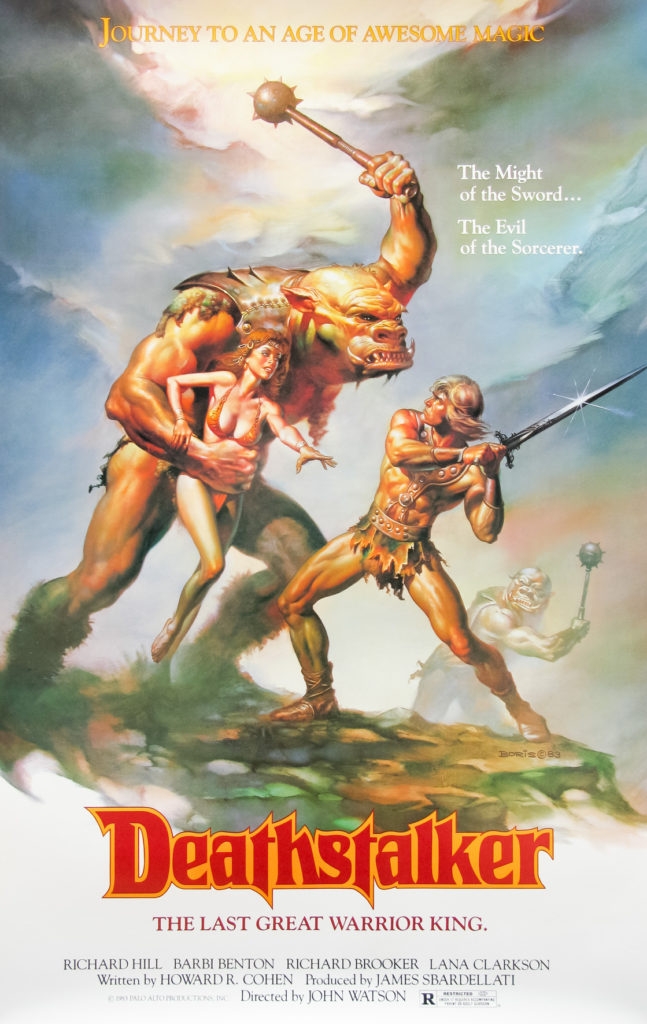 Plot: The warrior Deathstalker is sent by a witch on a quest to find a chalice, an amulet, and a sword, two of which are held by the wicked sorcerer Munkar.

I hadn’t seen this for many years and found it on Tubi the other day so with absolutely nothing else better to do with my time it was time for a revisit.

Deathstalker definitely felt more like Game of Thrones in the way that the women are generally treated horribly with the barbarian men/warriors essentially raping them regularly. I guess it makes it more authentic as that is the way you would expect these people to behave but despite the regular bouts of nudity it really comes off as more unsettling rather than titillating. No one is especially likable so it’s difficult to root for anyone although there is some quality gore and no shortage of sword fights and bloody action.

Our “hero” Deathstalker (played by Richard Hill) isn’t a particularly sympathetic character either as he is a selfish loner who also isn’t afraid to force himself on women. He doesn’t even care about stopping the evil king Munkar (Bernard Erhard) stating that “I steal and kill to stay alive. Not for the luxury of glory” but eventually decides he’ll do it as he likes the idea of power.

Cue lots of boobs, violence and silliness with a run time of an hour and 20 minutes so it’s all pleasingly short. I don’t think anyone could be disappointed with how Munkar is disposed of by the end either meaning he will definitely not be in a sequel.

Although it’s all very campy the acting is maybe better than you’d expect but hardly award worthy. I wish there were more creatures too as the pig guy doesn’t look anything like the monster on the rather amazing poster. They really knew how to do movie posters back then though, didn’t they? Fantasy art has always been close to my heart so think I might have to track down the Deathstalker post for my room.

Overall, Deathstalker may not be a great film and some of it makes for uncomfortable viewing but it’s still a nice distraction form reality with plenty of action and bloodshed to keep fans happy. 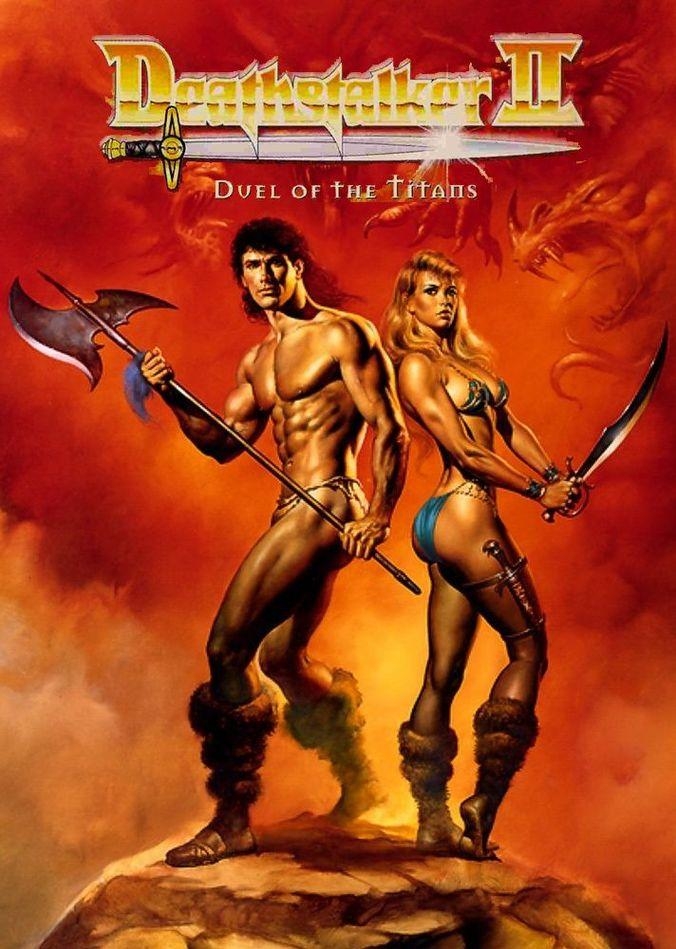 Plot: Princess Evie of Jzafir is deposed by an evil sorcerer and his dangerous ally. Reena the Seer enlists the aid of the renowned hero Deathstalker to battle the forces of evil, including a clone of the princess, and win back her kingdom.

Co-written & directed by Jim Wynorski (Chopping Mall) Deathstalker II is just an outright comedy not taking itself seriously at all.

John Terlesky takes over the role of Deathstalker from Richard Hill (who would return for Deathstalker IV) spouting regular one-liners and just looking like he’s enjoying every minute. The character is still a bit of a douche at one point even saying he has no problem beating a women if she deserves it… OK then. This sequel is less rapey than the first thankfully and has slightly less blood and boobs (although there is still some); the acting is mostly terrible, but it just adds to the entertainment value.

Monique Gabrielle plays Evie and is pretty wooden but she does at least get topless later on and she would also go on to star in Cirio H. Santiago’s Silk 2 in 1989.

There is a moment from the first movie that is in this one again featuring the pig creature looking at the head of another pig creature and eating it. There are various references to other movies too like Big Jake (again!) when Deathstalker says to the amazingly named Sultana (Toni Naples) “I thought you were dead” to which she responds, “not hardly”.

The music score goes for a very 80’s synth style instead of the orchestra that the original movie had; it still has a great theme tune which is very memorable to this day.

John Lazar plays the evil Jarek the Sorcerer who gets a rather satisfying death with Deathstalker sticking a sword through his chin. The film climaxes with a relatively big battle scene and there are even zombies in this one too. It’s well paced and also pleasingly short with regular action scenes.

Overall, I’m not going to pretend Deathstalker II is a good movie by any stretch of the imagination but it sure is enjoyable with plenty of hack and slash action. It’s cheap and trashy and best viewed with beer for maximum entertainment.

Deathstalker and the Warriors from Hell (1988) 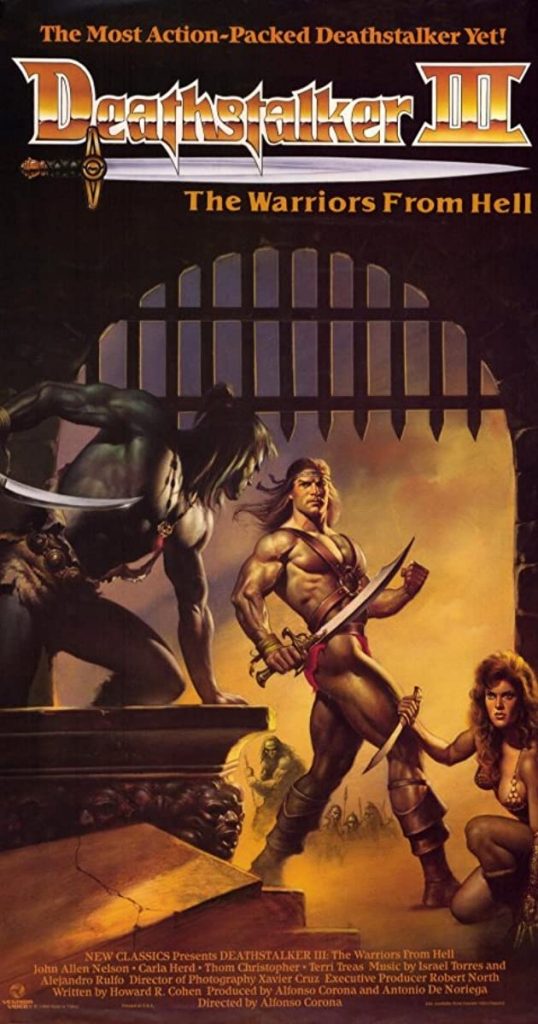 Plot: The third thrilling saga of Deathstalker pits him against the evil wizard and ruler of the Southland, Troxartes, and his band of undead warriors.

You know you’ve made a classic movie (for all the wrong reasons) when Mystery Science Theatre does a video on it and Deathstalker and the Warriors from Hell is one such movie.

This time John Allen Nelson takes on the mantle of Deathstalker and to be fair he’s arguably the most sympathetic version to date; he’s sort of an old-fashioned swashbuckling hero and is far less rapey than previous incarnations which is a plus. He tries a little to hard with the jokes and the script doesn’t help matters much as there is some clunky dialogue but admittedly that is part of the charm of this franchise.

The villain this entry has the amazing name of Troxartes and Thom Christopher plays him with suitable relish although he isn’t a particularly threatening or frankly evil enough bad guy. Personally I thought he seemed like a decent enough guy and I’d have worked for him; frankly I’ve had worse bosses.

Anyway, this is pretty bad even by my low standards but you’re probably better seeking out the MST3K version a that will make it far more enjoyable.

The music is hilariously cheap sounding which is a shame considering how awesome that catchy theme tune was to the second movie. It should be noted that at some point eh music may sound familiar so I had a look on IMDB and they state that the opening credits music theme is borrowed from Battle Beyond the Stars which of course is another Roger Corman production. They also state that the background music in the scene where Deathstalker prepares to escape from the valley and first kisses Marinda is the prophecy theme (composed by Brian Eno) from Dune (1984) which explains why it sounded familiar.

The fight scenes rarely convince, and this sadly lacks the violence of previous entries; there is still at least some nudity and it is a pleasingly short watch.

Overall, I would recommend the MST3K version of this movie instead of the original as it’s far more entertaining; this is still harmless nonsense but it lacks the blood and guts of previous entries making it a bit dull. 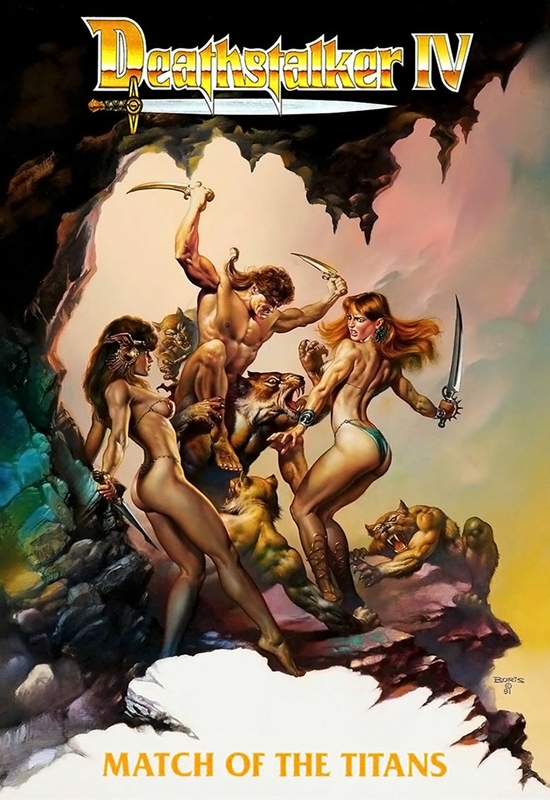 The fourth and final Deathstalker film has Rick Hill return as the titular hero and this feels like a direct sequel to the first film. This is most likely due to the fact it also reuses footage from the first movie, so it all seems rather familiar. He has the usual one-liners and taunts his opponents during battles, but Rick will always be the original and best Deathstalker.

The best scene is the Pig man once again stealing the show as he rips off a guy’s arm and then proceeds to beat him with it; it’s all downhill after that sadly.

The story involves another fighting tournament but the difference being that this time we have a female villain called Kana (Michelle Moffett) who wants to turn all the warriors into an army of stone soldiers… which is something we can all relate to. She isn’t a particularly exciting villain but does the job in a film of such generally low quality.

Deathstalker 4: Match of Titans had a budget of around $4 and every penny is up on the screen giving us some underwhelming fights and unconvincing cat people costumes. Although it’s only 80 minutes long I still counted the seconds until it was over, so this is a franchise that really went on far longer than it needed to.

Overall, Deathstalker 4: Match of Titans is a rather dull end to an average franchise which admittedly has its moments but I wouldn’t recommend any of the movies sober. The best aspect of all the movies are the amazing posters which I just had to include in this article.