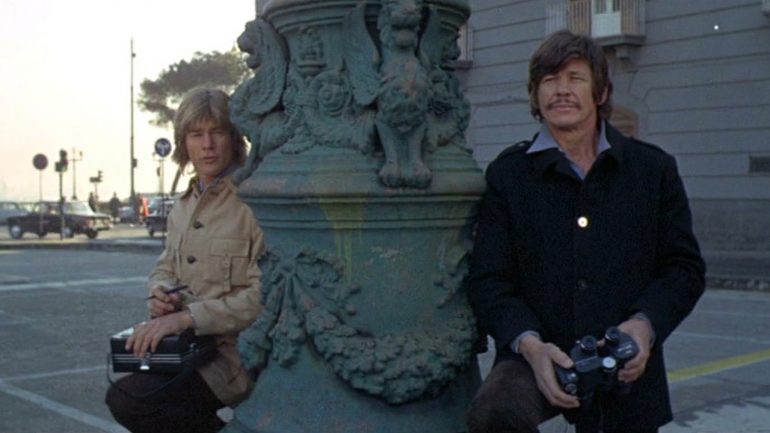 Plot: Arthur Bishop (Charles Bronson) is a veteran hit man who, owing to his penchant for making his targets’ deaths seem like accidents, thinks himself an artist. It’s made him very rich, but as he hits middle age, he’s so depressed and lonely that he takes on one of his victim’s sons, Steve McKenna (Jan-Michael Vincent), as his apprentice. Arthur puts him through a rigorous training period and brings him on several hits. As Steven improves, Arthur worries that he’ll discover who killed his father.

After the sad passing of Jan-Michael Vincent yesterday I thought it would be a fitting tribute to revisit one of his best roles in the original Mechanic starring Charles Bronson.

Compared to the Jason Statham and Ben Foster starring remake, the pacing of  this movie is rather slow, especially in the first half. The first 15 minutes are completely dialogue-free, which is an interesting touch really ramping up the tension. It involves Bishop spying on his mark and then preparing the assassination. It slowly builds and has a satisfying conclusion however, after that it’s mostly action free until the second half of the movie so modern audiences may not approve of its more deliberate pacing.

Bronson plays Arthur Bishop as utterly without remorse; he actually enjoys being a killer and only takes on McKenna as he feels he could use the help. Charlie is at his cold and ruthless best here  with Vincent playing McKenna as rather smug and arrogant so he is difficult to take to even if you do understand his motivations.

The screenwriter of the film Lewis John Carlino originally wanted the two leads to be gay and according to IMDB Producers had difficulty securing financing and several actors, including George C. Scott, flatly refused to consider the script until the homosexuality was removed. There are still themes of sexuality underlying but I thought this was hinted at more in the remake with Ben Foster especially and the scene where he seduces a mark before killing him was a possible tribute to the original screenplay.

Carlino would later describe The Mechanic as “one of the great disappointments of my life”, stating:

“I wanted a commentary on the use of human relationships and sexual manipulation in the lives of two hired killers. It was supposed to be a chess game between the older assassin and his young apprentice. The younger man sees that he can use his sexuality to find the Achilles heel that he needs to win. There was a fascinating edge to it, though, because toward the end the younger man began to fall in love, and this fought with his desire to beat the master and take his place as number one….The picture was supposed to be a real investigation into this situation, and it turned into a pseudo James Bond film”.

The film has a very psychedelic feel to it, with some bizarre scenes including the attempted suicide of McKenna’s girlfriend to the 70’s style soundtrack; I liked that aspect as it gave the film an almost dream-like quality which was very much of the time.

The action picks up in the second half and moves along at a good pace; despite the slower first half I was never bored as it is always tense with the threat of violence looming every second. According to IMDB The Mechanic is notable for a motor-cycle stunt where a motor-bike rider, at the end of a long chase, rides his bike off a 200 foot cliff. Husqvarna motor cycles were specially adapted to film the chase hitting speeds of nearly 110 miles per hour whilst filming on location at the Indian Dunes, Newhall, California.

*Spoiler alert* It has a very ballsy finale where Bishop actually does get killed by McKenna, but like the remake Bishop has rigged McKenna’s car to explode, so both of them are dead by the end. This was arguably a more satisfying ending and made the story that bit more believable than the Hollywood happy-ish ending we got in the remake but this was the 70’s which was a far more nihilistic period for cinema.

The slow pace and lack of big action set-pieces may put some viewers off, but The Mechanic is worth viewing for King Charles of Bronson and Jan-Michael Vincent at his best; I still consider it a classic and must-see.