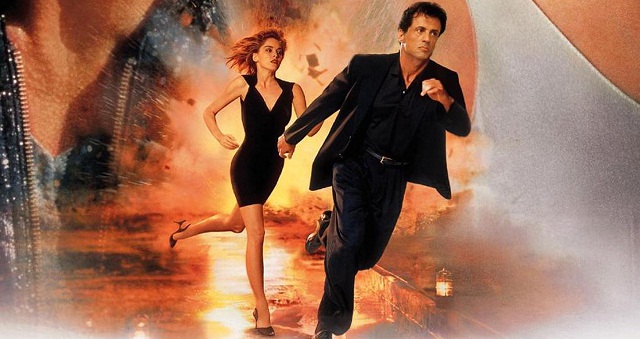 Looking Back at The Specialist (1994)

Plot: Former CIA demolition expert Ray Quick (Sylvester Stallone) lives in Miami, where he works as a hit man. May Munro (Sharon Stone) contacts Ray to kill a family of mobsters led by Tom Leon (Rod Steiger) and his son (Eric Roberts), who murdered May’s parents 20 years ago. Ray agrees to the job and also begins an affair with May. His mission is complicated when he learns his former partner, Ned (James Woods), now works for the mobsters he is trying to kill.

The Specialist wasn’t exactly given glowing reviews when it first came out which is understandable but I do have a spot spot for it; the cast alone includes Sylvester Stallone, James Woods, Sharon Stone, Rod Steiger and Eric Roberts and is every bit as fun as it was when I first watched it back in 1994.

This is James Woods’ movie as he steals every scene as the villainous Ned Trent who was a former colleague of Stallone’s Ray Quick (awesome action hero name). Woods is at his punchable, hateful best as Ned; there are literally no redeeming qualities to his character and he is just a great antagonist that is just there to be a dick with lines like “who gave you permission to smile?”

In the opening scene Ned and Ray are tasked with blowing up a bridge to take down a cartel boss but when they see a child in the car Ray tries to prevent the bomb going off but is too late. Ned laughs it off as he clearly doesn’t care about human life and just wants to get the job done. The pair briefly fight and Ray vows to destroy Ned’s career at the agency and we cut to a few years later.

In present day Miami Ray is having steamy nighttime calls with May (Sharon Stone) who wants to hire him to kill the man that executed her parents (Eric Roberts) in front of her as a child. Ray is at first reluctant but after following Tomas (Roberts) and May around he understands that the world will be better off without him so he eventually agrees to help May.

Sharon Stone was mesmerizing in this not only looking fantastic but also coming across as strong and determined to get her revenge, no matter the cost.

The Specialist isn’t short on spectacle either with some literally explosive action scenes but my favourite scene is on the bus with Ray beating up a group of thugs; it adds nothing to the plot but is just there for sheer entertainment value and is incredibly satisfying. There are explosions every few minutes in this movie and the finale is still impressive with the warehouse being destroyed. My only gripe is that Ned’s death isn’t satisfying enough; I wanted him to get punched in the face until there was nothing left but instead he just gets blown up… which I guess is more fitting with the movie as it’s all about explosives.

There is a sexy atmosphere throughout only elevated by (James Bond composer) John Barry’s music score whose style is immediately recognizable.

Eric Roberts is at his smug asshole best here as Tomas who “takes what he wants” and like Trent has no redeemable qualities whatsoever. Rod Steiger is hilariously over the top as mob boss (and Tomas’ father) Joe who just chews the scenery every moment he is on screen.

Overall, The Specialist is pure action cinema which has one goal – entertainment and that’s exactly what it does, perhaps not always for the right reasons but I can watch this regularly and never tire of it. The action is consistent with Stallone beating up bad guys and exploding buildings, James Woods is at his sneering villainous best and John Barry’s score is perfect.