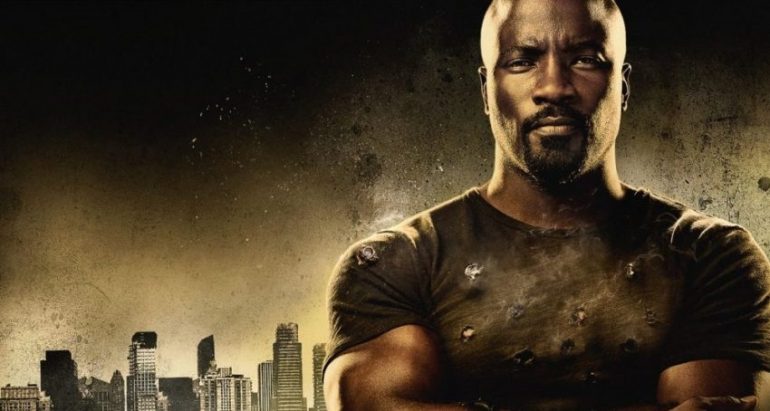 Luke Cage is one of the best Marvel Netflix shows to date with memorable characters, plenty of action, swagger and style. It is mildly less interesting without Cottonmouth but it’s never less than entertaining.

Plot: Season 1 of the gritty, action-packed drama followed Luke Cage, a man with super strength and unbreakable skin caused by a sabotaged experiment. When the series begins Luke is trying to rebuild his life by striving for a quiet life in Harlem, New York following his failed relationship with fellow superhero Jessica Jones. Cage is pulled out of the shadows and forced into a battle for his city and forced to confront his past, which he has worked hard to bury.

Review: I go into spoilers in this review so if you haven’t seen Luke Cage then do not read on.

It feels odd to have watched this after The Defenders but I’m glad I did as Luke Cage has now become one of my favourite Marvel characters; this series is a mixture of Shaft meets Superman with a 70’s Blaxploitation vibe and oozing style from every pore. Mike Colter is immediately appealing as Luke Cage who (despite his protestations) is a complete hero who wants to protect Harlem from local gangster Cottonmouth (Mahershala Ali).

Ali has a penchant for having an excellent wardrobe in his roles and I think Cottonmouth is not only one of his best characters to date but he may well be my favourite of the show too; he is far from a one note villain coming across as cool, intelligent, sophisticated and talented where you almost root for him except for the whole killing his own men on a regular basis thing. There is no doubt he’s a bad guy but he’s magnetic every moment he is on screen. It was odd when they decided to kill him off half way through the season and although Diamondback was intimidating I still preferred Cottonmouth as a character.

Rosario Dawson returns as the wonderful Claire who once again is there to heal people at convenient moments and a potential romance between her and Cage begins; she is immediately appealing and she has great chemistry with Colter on screen.

Misty Knight (Simone Missick) hooks up with Luke early on so there is always this sexual tension between them both which keeps their relationship interesting but most importantly she is also an incorruptible hero making her tough yet believable.

Theo Rossi is a fine addition to the cast as the mysterious (yet strangely likable) Shades who is the advisor for Cottonmouth but he also starts to push congresswoman Mariah Dillard (Alfre Woodard) so she can take over the family business after Cottonmouth. Dillard essentially becomes the primary villain alongside Diamondback but she is nowhere near as interesting a character.

Luke Cage is a love letter to Harlem and its people with a bluesy music score reminiscent of the Blaxploitation era at its finest. It has a wonderful array of supporting characters like Pop (Frankie Faison) who brings real heart to the story so when he is inevitability killed we are genuinely sad at his passing. You get a real feeling of community with several larger than life characters who we grow to truly care about.

Of all the Marvel Netflix shows I think this feels surprisingly the most like a superhero series and connects with the Avengers universe as there are mentions of Thor, Iron Man and even technology courtesy of Hammer Tech. We also get to see the original Luke Cage costume in an entertaining flashback sequence so you’re never in any doubt this is a fictional world but with more realistic characters. There is no shortage of action with Cage taking on goons in every episode and there are some great hard R moments, mostly from Cottonmouth beating people to death. The final fight between Cage and Diamondback is satisfying and the season ends on a genuine cliffhanger too.

Overall, Luke Cage is one of the best Marvel shows to date with a great list of characters, plenty of action and a true hero played with great empathy by Mike Colter.