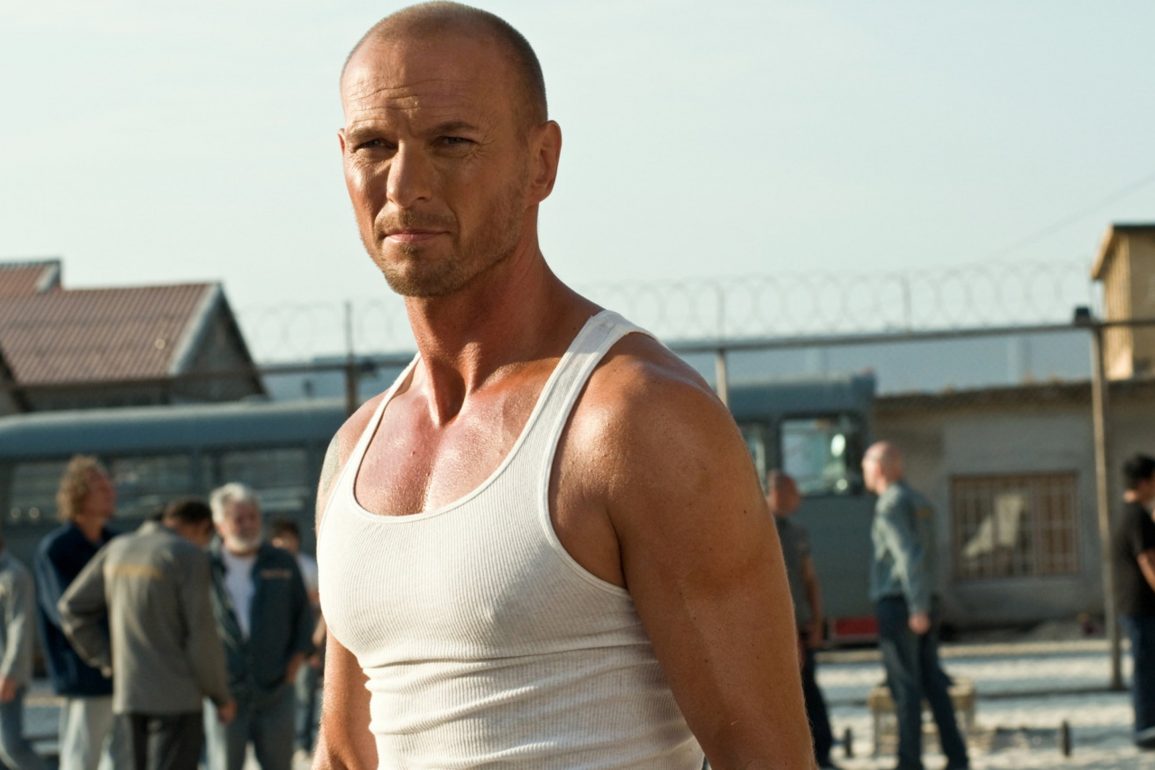 In THE NIGHT CREW a group of hard up bounty hunters must survive the night in a desert motel against a horde of savage border runners. They soon realize that their fugitive, a mysterious Chinese woman, is much more than she lets on.

Luke Goss stars alongside Danny Trejo and Bokeem Woodbine; the movie is directed by Christian Sesma (Lost Time). Luke kindly stopped by to chat with The Action Elite about the movie.

So, tell us about your character Wade in The Night Crew?

Wade is ex-military, really high level like Delta Force and I guess a born leader. He’s a very selfless kinda guy. In his team there’s this one character called Ronnie whose been doing this for like 20 years and he and Wade have basically been fighting together. Another character Crenshaw is also ex-military but not quite at the same level that Ronnie and I are at and then there’s a girl who’s done some mercenary work and she’s pretty much a badass character called Rose. So basically Wade, Ronnie, Crenshaw and Rose are the four members of the night crew. We’re basically bounty hunters and we have an FBI mark where the bounty was issued 36 hours before but it’s a big payday so we decide to take the job and go across the border to Mexico and pick her up. There are a few things that have changed which would be spoilers so I can’t give that away just now but it’s unexpected and the last thing we saw coming.

The great thing about the story is there are a couple of twists and turns that really change the feel of the genre of the movie but we play it very much like this is the real deal like set very firmly in reality; then the movie kinda takes a really cool twist. The stakes get a lot higher and the adversaries get a lot more dangerous and we find ourselves slam dunk in the middle of a shitfest down across the border in Mexico, which was the last thing we needed.

It’s really cool how we start the movie like we’re real guys, we’re not like Dog the Bounty Hunter. Not that I have anything against him; but they’re packing a LOT of hardware. I really liked the character a lot and I really liked playing him.

Is that what appealed to you about the script?

There was one little thing that kind of semi-vilified Wade in the story but I thought it’s a real story, where real shit happens…

I like the fact that he’s a leader; I wanted to make sure he wasn’t too bossy or being a bully in any way but he’s justifiably the leader of these guys because he knows what he’s doing. He wants them to be safe and he wants them to be able to go home at the end of the job. He’s good at what he does and he cares about them.

It’s a genre movie I guess but it’s got a cool bunch of cool stuff going on and director Christian Sesma and I get on really well and the DP is my favourite DP that I’ve worked with; I love working with A.J.

What is it about director Christian Sesma that made you want to work with him again after Lost Time?

He’s very collaborative; he likes what I do and isn’t shy about it either. He has great faith in what I bring as far as the character is concerned. He is someone that I can say I really enjoy working with. He’s the kind of guy where I can say (even it’s just a quick shot) but he knows me and I’ll be like “What about this? Or what about that?” and he’ll be like “Great!” He also gives cool little notes throughout the day and he’s got a very hip sensibility and zero ego. So you’ve got a lot of triangulated energy there with Christian, A.J. and myself. I knew we had a movie where we all gave a fuck and we all really care so we went from there.

What can we expect from The Night Crew in terms of action?

It’s realistic in one sense but there is a really cool thing we’ve been doing where the camera is moving all around; let’s say for example there’s a gun on my hip and it’s coming up into a piece of action. The camera might go underneath and we shoot 120 frames per second so we can basically go into super slo-mo, ramp it into high speed, back to normal and back into slow. So that’s the kind of signatory shooting style for Wade’s fighting which Christian, myself and A.J. came up with. We wanted to make sure that when you see Wade fight you’re going to see that he’s the wrong guy to mess with.

Director Christian Sesma is from the town of Cochella where the opening of the movie was filmed and he was saying in a recent interview that a lot of the local people are involved in the movie. What was that like?

There was a lot of Extra stuff like the Day of the Dead stuff we shot at night with a kind of mini parade. It’s actually always really nice to work in locations where the locals are stoked about film. You go to Canada ad they’re like “ah yeah, another movie, whatever.” That’s OK but it’s much more fun to work in a town where people still love film and they’re still excited by it. I think because Christian is a local, it’s a nice proud moment for him and his family. With, Danny, Me and Bokeem Woodbine you get people saying “hey, what are you doing here?” and it’s just a really fun atmosphere and it makes the community feel like they are part of the movie. Bringing that flavour to town is nice.

I’m a big fan of the desert; what has the shoot been like so far?

I actually feel at home here; I love being in the desert; it makes me feel so genuinely happy. There’s just a cleanliness about it, on a spiritual level I feel very connected to it. I feel much more at peace here and much more at home than I do in Los Angeles. L.A. sometimes makes me feel a little anxious and overwhelmed at times. It’s just so full on, full on all the time. As an actor that’s working I sometimes feel that I don’t need to be there and that I can be anywhere to read a script.

I may even consider getting a house out here at some point because I really feel at home.

I fell in love with the desert when I went to Vegas a few years back. Do you think it’s because we’re British and never take the sun for granted?

Yeah I think because it’s such a 180 degree turn to what we’ve all been used to but for me it’s just the lack of clutter, lack of noise and there’s like a purity about it. As an entertainer I’ve been in this business for 20 plus years and I think the solitude and truth of it is something I really, really get a real sense of freedom there. I really love the desert and it’s one of my favourite places to be and the funny thing is when I did Bone Dry, it was such a miserable story but the desert was kind of my sanctuary at one point. That’s when I first fell in love with it and realised I had a connection to it.

You tend to work with the same directors and actors regularly like Danny Trejo and Christian Sesma; is that deliberate or is it by coincidence?

Sometimes people say who do you think might be good for this? And I might say this person might be a good match. Let’s say Danny Trejo; the truth is I love seeing him; any time we see each other on set we give each other a hug and it’s a genuine friendship. When you’re on a set the last thing you want is a Primadonna or a pain in the arse who acts like an idiot. You just want people who love film; they want to be on set. You know they’ll deliver and they know it’s going to be seen and they want it to be good. No one’s just showing up and phoning it in.

You’ve got a director who’s a lovely person, who’s got a capability and the DP, cast members or whatever. Then you put them all in a movie together and it makes sense on a business level. You manage it because you want to create movies that people want to buy and watch. I think it’s just a good way to start the day with competence and camaraderie. For me it’s a combination of those things I guess.

Danny Trejo’s just the nicest guy; I interviewed a few months back for Machete Kills and he was just so cool.

He’s got a great energy and I saw him yesterday actually on set and I’m standing there and he comes up behind me and puts his arms around me and I’m like “there’s my buddy right there”. He is a nice guy; he’s a capable human being with a heart of gold.

I hear the movie is to have a graphic novel feel; can you tell us about that?

I think some of the sensibilities are like that; I think as we’ve made the movie though it’s more Man on Fire-ish. With a lot of genre movies the quality is not quite there but this one has a very dramatic feel to it like Man on Fire or Traffic. I think at times it will have that comic book feel but I think what’s happened with the evolution of the movie is we have such a solid story. The thing was with the payoff we needed it to look very authentic and real. It’s beautifully shot; the composition is really important with this film and nobody is overlooking the frame. So some of that has changed to a degree because we realised that the style during the first third of the movie would be giving something away, I think. The mission changed once we actually started making the film.

Any word on a trailer?

Being a big kid myself I want to see a bloody trailer today; I think the trailer will be around sooner rather than later. I guess in the next month or two.

Have you gone to Christian Sesma’s family-owned restaurant ‘Guacamoles’ in Palm Springs? Any good?

No, I haven’t had the time actually but I’ve been going to a place called Riviera; it’s really kinda chic and cool but because I’m filming I could try somewhere different every night but I thought “You know I’m just gonna use this place like it’s my living room”. It’s closer to the hotel; Christian’s place is further out from where we’re staying in downtown Palm Springs. We haven’t made it yet but I’m sure we will before the movie’s over.

You can always have your Christmas dinner there.

Right; it’s always bloody strange having Christmas in California; the sun is out, there’s palm trees… but I’m like “OK”.

Thanks so much for chatting with us again and all the best with the movie. Have a great Christmas and New Year too.