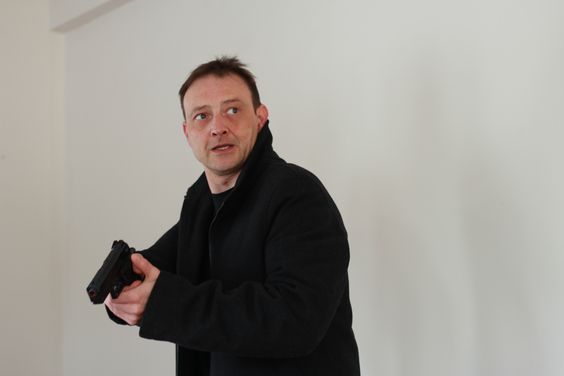 Lyle Goodwin is an actor and director, known for South of Heaven; an indie action thriller which took four years to make and is the first action drama to ever be filmed in Yarmouth Nova Scotia, Canada.

PLOT: They are government funded, elite killing machines. Now after an operation goes wrong their former leader is now the hunted.

On the run for four years, Brandon begins to have a normal life with Rachael and her son, until the past comes back to haunt him. Watched at every turn, he must not only confront the ultimate killing machine but the demons from with in his own soul.

Lyle was kind enough to talk with The Action Elite about the project.

First of all tell us how you came up with the concept for South of Heaven?

I was trying to put together a film for a low budget producer of martial arts, action and horror films in the hopes I might get some acting work.  In the pre-production process I began to think if I am doing all this work why don’t I just try selling the film online and see where I can go from there.  I based South of Heaven on a series of short films that I had made many years ago and it was about three guys who were like brothers, two of them got killed in the opening of the film and my character was left to put the pieces together by trying to solve the mystery as to who was capable of the crime.    I was almost half way through shooting the film and the two guys got better jobs and ended up leaving.  So I was left holding the bag sort of speak.  From there I kept the initial structure of the film but my wife and step-son agreed to step in.  After watching a completed cut of the film it became apparent that that was the best move and the story became more dramatic than I ever hoped.

It must have taken a long time to edit all the footage; talks us through putting it all together?

All in all it took eight years to make the film, develop the company, design all the physical merchandise and plan an online distribution strategy all the while learning what I could about editing.   I worked seven days a week for hours on end trying to put the entire film together.  Editing is where movies are truly made and sure you can have all the shots planned but one never really knows until you sit down and begin to put your vision together.

I learned what I needed to in order to pull it off.  I trained with an Avid at my local community television station where I volunteered but for whatever reason I used Adobe to assemble the footage in my office at home.  Editing television segments and cutting an action film are two different animals and by making short films and experimenting with the editing software I learned to cut a lot of those shots in South of Heaven to the frame making for fast paced action sequences.  After effects provided a great opportunity to learn even more skills and use the presets that came with the software.

While cutting the film I began to see certain shots that really didn’t work but if they were flipped around then I could use it and that really opened my eyes as to what might be possible.  If I remember correctly there are over one hundred and thirty infer red and fifty night vision effects shots in the film so that made for an extreme amount of planning as to where they were going and how long they would be.

For some of the visual effects I had to learn how to motion track the elements keeping them locked in place while the image moved.  We digitally burned a forest to the ground and that included smoke, embers, fire not to mention bullet holes hitting trees, tracer bullets whipping by and muzzles flashes.  There were so many effects shots that had to be added that a five minute scene took me over a month to complete.

I liked the reference to “First Blood” when Brandon shouts “You don’t just turn it off”. Any other movies that were an inspiration for the project or to you in general?

Hey you caught that?  I am impressed.  I am found of the older films to me they are classics so there were lots, Loren Avedon’s “King of the Kickboxers”, Michael Dudikoff and David Bradley’s “American Ninja Series”, “The Rambo Series”, Chuck Norris films, Sho Kosugi’s “Ninja” series and the Matt Damon “Bourne” films. I became inspired by all of these films as a kid and that made me want to make movies so when I decided to make South of Heaven I sat down and got lost in that world again, taking notes and story boarding any idea that I could think of.  You know I still watch those films to this day.

As for Brandon, I wanted an anti hero someone who doesn’t want to get involved in anyone’s fight, who has their own inner demons to deal with, someone who just wants a small portion of inner peace yet somehow always finding himself in the center of a conflict.

After all we are talking about an elite soldier who has lived a life very few of us will ever know and I found that John Rambo type of character so appealing for a story of someone who really just doesn’t fit in anywhere but still has some sort of desire to find his place in the world.  It’s that classic character that we all want to route for and hope that one day does find that inner peace.  Deep down South of Heaven is more than just an action/ thriller but a love story, a drama, a family story.  It has all the elements.

Tell us about the $9.99 package you are offering and what it includes?

“Burn in hell”: South of Heaven- The [Classified Edition] is fully loaded with over seventy six videos and the feature film.  There are numerous featurettes, cast interviews, two gag reels, location spotlights, soundtrack, screenplay, behind the scenes, “Simon’s Log web series”, special effects break downs of the cemetery scene and so much more.

I chose the price of $9.99 and created a package deal because I know how hard people have to work for their money and no one knows who we are just yet so in that respect I wanted to give the fans more bang for their buck.  Also I now have a few more options available for the fans, buy just the film, the film with the release trailer or rent the film.  All the while still keeping the prices reasonable for the fans and building our audience.  So I truly hope they enjoy the film and all the hard work that went into it plus all that is included with it.

Do you come from a martial arts background? If so tell us about your training?

I began studying Chito-ryu karate at twelve and ever since then I have explored different martial arts for different reasons.  For me the martial arts is my own form of personal expression and I never felt the need to compete in any tournament therefore I am not one of these action movie guys who either is or claims to be a champion of any tournament.  I regard myself as an actor, someone who has studied martial arts but at this time I don’t want to do just those style of films.  If a film I make has martial arts in it that’s fine but I want a broader area of work in the genre film market.  I am looking into getting trained in jujitsu next for my new film and Krav Maga is something that feels right for me as well.

On another personal level, I always felt that I wanted a more real approach to fighting and a combat system is something that I believe in especially this day in age with the crime the way it is, but that is my own personal opinion.  However I still do believe that the martial arts either it be karate, taekwondo, jujitsu or whatever art you study is a good thing for the young and old to build confidence, fitness, friendship and honor.

What was it like to work on as your first film?

There are so many elements for you to keep track of but it is a good thing.  It allows you to learn all things that go into making a film.  Here is a chance for me to fulfill a lifelong dream on my own terms as my own boss and that is so gratifying that for anyone who has accomplished a goal and then began to stretch themselves more into growing ever further is such an amazing feeling.

I always wanted to be included in that world where I might be able to stand along side my idols and be just like them but as I grew as a filmmaker making this picture I also grew personally too and being just like them would be a compliment but it’s not a necessity. I never thought I would learn about myself and what I wanted from this business by making this picture.  I mean it took so long to make and there are so many avenues to choose from when it comes to distributing you own film that one can’t help but grow.  When I started I was scared to death to turn on a computer now I am writing, editing and directing films on one.

My cast, Paul Surette, James Turpin, Marc Durkee, Kerry Winship and Christian Gillieo were all excellent to work with and very supportive this was a very loose, fun and creative environment for all and I truly believe it shows in their performances.  They brought so many great ideas I didn’t even think of so I certainly will call on them again for my next picture.  Michael MacDonald my producer from my community television days guided me on so many things and lent his voice for the film and will also appear in my new film.  Without those guys this movie would never have been made and I owe them my deepest gratitude.

Right now I am finishing the final draft of “Nightmares”, a horror/ thriller where I play a traumatized FBI agent that is tracking a serial killer in a small town.  The entire film is about facing fear and it concludes in an epic showdown where the two giants face off in what I am hoping will be a true test of terrifying courage.  Yes there will be some martial arts in the picture but that is because of his FBI training. There is also in development:

Primal Instinct, When Seconds Count and Until Dawn

Was there anything you wanted to film but had to cut?

Yes there was actually a whole scene that was supposed to take place in the facility where they make the soldiers.  Brandon storms the facility trying to find Rachel and Christian and he faces off against a slew of military personal and the new ninja that were created.  Unfortunately I couldn’t find a location that suited me and I didn’t have enough people at the time so That entire sequence was abandoned.  It’s a shame because I think it would have been really exciting but in retrospect it probably would have made the film almost three hours long, it was a big scene.

Thanks very much and all the best with the film.

Thank you very much for this opportunity to speak with you and your audience, it was a pleasure.  See you in the movies.