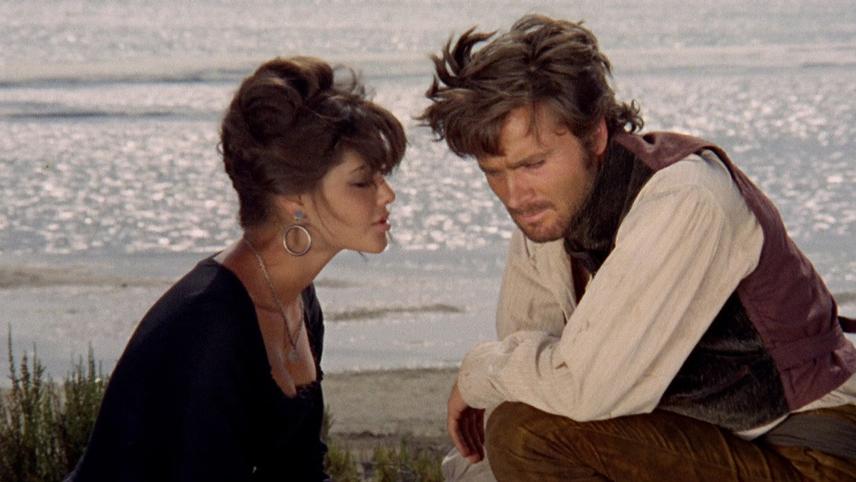 Man, Pride and Vengeance isn’t exactly action-packed but it still manages to be interesting with decent performances and a rather devastating finale.

Plot: When stalwart Spanish soldier Don Jose (Franco Nero of DJANGO) meets the stunningly beautiful Carmen (Tina Aumont of TORSO), he becomes instantly obsessed with the mysterious gypsy woman. After discovering she has cheated on him with his Lieutenant, Jose kills the officer during a brawl and flees the city. Forced to become a bandit, Jose partners with Carmen’s villainous husband Garcia (Klaus Kinski of FOR A FEW DOLLARS MORE) to rob a stagecoach and prove his love for the seductive femme fatale.

Also known as WITH DJANGO COMES DEATH, this unique ‘Spaghetti Western’ based on Prosper Merimee’s novella Carmen was co-written and directed by Luigi Bazzoni (THE FIFTH CORD) and beautifully lensed by Academy Award winning cinematographer Vittorio Storaro (APOCALYPSE NOW). Now Blue Underground is proud to present MAN, PRIDE AND VENGEANCE in a brand-new High Definition transfer from the original negative for the first time ever in North America!

Review: Man, Pride and Vengeance is an interesting movie from beginning to end but I have to admit that I was a little disappointed by the lack of action. There is a cool knife fight but it’s at night time so it’s a little difficult to see what’s going on.

Despite that though I found myself glued as I really enjoyed the unpredictable story; Franco Nero is very different from his turns in Django or Keoma. His character José is bewitched by a beauty named Carmen ad he essentially ends up destroying his life because of her. He murders, robs and becomes an outlaw all to try and run away to her for a “new life” in America. José isn’t cool or actually all that sympathetic and you know that things won’t end well for him. At the start he is a clean shaven soldier but by the finale he is a mess driven mad with guilt and obsession.

Carmen (Tina Aumont) is indeed stunning but you know that she never really cares for José and that she is basically manipulating him.

As we watch his life unravel I found myself shouting at the screen, telling him to move on and that she wasn’t worth it… but for some reason he just wouldn’t listen to me.

The acting in general is solid and we get either the original Italian version or an English dubbed version; for once the dubbing is actually pretty good and not unintentionally funny.

Nero gives one of his finest performances and really gets to show a bit of range as a man who loses everything.

Klaus Kinski is fabulously nasty as Carmen’s husband who you just know is trouble as soon as he comes on screen.

Blue Underground have done a fantastic job of remastering the movie and giving us plenty of extras to chew on.

Overall, Man, Pride and Vengeance isn’t exactly action-packed but it still manages to be interesting with decent performances and a rather devastating finale.