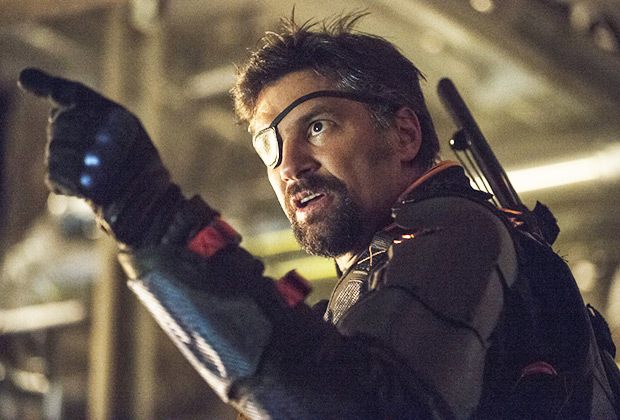 Manu Bennett stopped by to chat with us about his role as Slade Wilson AKA Deathstroke on the CW superhero show ‘Arrow’.

“Death would be a release from this life, and his sentence is yet to be carried out. I’m going to tear everything he cares about away from him. Destroy those who choose to follow him. Corrupt those he loves. Once he has lost everyone and everything he values, I will drive an arrow through his eye.”

Producer Marc Guggenheim has said that this week’s episode “The Promise” is the biggest episode you’ve ever done on the show. What can we expect in terms of action?

Well at one point I walked in on a set and there was a whole ship inside a film studio. Suddenly somebody came up and said “And Action!” and the whole deck blew up. I think one of the stunt guys was taken away with his eyebrows burned off. It was big; real big. Some of this episode was like Pearl Harbour.

Everyone has been talking about this episode as the big one and I think it is. In terms of action? Well, we’re basically leaving an island and going out to a freighter and we have no idea what’s on it.

[quote]We’re just winding our way down that rabbit hole to enter the deepest, darkest moment of the series thus far.[/quote]

As you can imagine, it’s no good if there’s no drama without adversity and we’re now working our way on to another big problem.

The ship is known to be Ivo’s laboratory with the Mirakuru and a whole bunch of subjects on the ship.  So yeah, I think we’re just winding our way down that rabbit hole and enter the deepest, darkest moment of the series thus far.

We’ve always referred to the island as being a prison and being stuck on it. Let’s just say, it’s a lot better than a freighter…

As we saw in last week’s episode to Oliver’s surprise, Slade Wilson is alive and has come to Starling City. Aside from the huge action, are there any particular highlights for you?

Well it’s called “The Promise” so what does that mean? For me, I’ve been waiting to find out the trigger that leads Slade away from his friendship with Oliver. There are a few things floating around that are a potential disaster for them getting along. One of them is that Slade is being affected by the death of Shado; I would say even more so than Oliver.

When it comes down to things like that you start to liken it to Shakespearean tragedy. I liken it to Othello with Desdemona; there’s kind of a love story that existed at least for Slade where he had affection for Shado. He also effectively died and after being given the Mirakuru, he woke up and the first thing he said was “Shado”; he went outside to find her and she’s dead. She hadn’t been protected; he was there to protect her and he failed. Oliver’s been speaking about the fact that he feels responsible because he was given a choice between the two of them and he could have chosen either one of them, but he saved Sarah.

If truth be known, Slade has already seen Sarah as being a problem on the island. I mean, here is Oliver with this girl who is the sister of his girlfriend from Starling city who he took on to this boat and she was supposedly drowned. Well he told Slade that story over the fireplace in earlier episodes and Slade was like “I didn’t know you were the bad boy”.

So he realizes that Oliver has double-timed his girlfriend and now he’s seeing her come on to the island and Oliver’s attentions even shift away from Shado. When Slade finds out that Oliver had a choice between Shado and Sarah and he chose Sarah… taking Mirakuru, he’s got a big problem. Even if it’s not the full truth, it depends on the perception. It’s like Iago whispering in Othello’s ear; if Slade believes this then you’d agree we’ve got a major problem. That’s where the twist sort of lies… and there’s a helluva lot more Mirakuru on that ship.

Slade once told Oliver that everybody is in this life for themselves; do you think the Mirakuru is enhancing or just bringing out Slade’s true nature?

I’d say it was twisting it; like I said it’s like Othello. Was it Othello’s true nature to be jealous or a murderer? No, but you take someone’s weaknesses, take people back to their necessities and then start rebuilding the building blocks; twist things here and there, stab them in the emotions and stuff like that. Nobody’s born evil and that’s kind of an element of the DC comic world’s version of Slade Wilson/Deathstroke and that’s what I’m trying to maintain and keep true to the fans of the character.

In the comic series, his son’s death at the hands of the Teen Titans is what essentially turned Slade Wilson into what you’d call a supervillain. He then took out a contract on the Teen Titans because they killed his son.  The way Arrow is doing that story is they’ve used Shado’s death as that point instead.

Slade’s convictions towards Oliver are of somebody who he taught and who he saved. Oliver would never have survived on the island without Slade’s help. Now that he knows that Oliver has had this past relationship with Sarah and that Shado has sort of become a second wheel and dies. When Slade finds out that Oliver had any choice in the matter, there’s going to be Hell to pay!

That is the undoing of many a friendship and the old tales of humanity of time and existence: Women, money and land all start wars. You add all that and the fact that the episode is called “The Promise” then you find out where things are going. They’re not going to be able to run about on the island or hide in caves anymore; they’re going to be stuck in a tin can with a bunch of prisoners and torture instruments. This is not a nice place, this freighter and all of these things are set to unravel.

We’re also going to keep piling on that back-story like what is Slade doing back in Starling City? I mean, he’s walked right into Oliver’s house! He’s friends with his mother so you can safely assume he’s about to meet everybody else. You’re going to be asking yourself, what’s Slade the military guy who’s worked in the army doing in a Hugo Boss suit?

How did he get the influence to get invited by Moira Queen to her mansion? What sort of circle of influence did he have to build to get to that point? There’s a strategist who’s been at work for some time to accrue the finances and the Ware-With-All to work his way into Starling City with a reputable background. So Slade has been hard at work making something happen and you can probably safely assume that something is a kind of promise. There will definitely be a price to pay. Oliver has built up all of these lies with his family and Slade Wilson knows most of it.

I mean, Slade knows the Arrow, right? Anyone else who knows that is protecting Oliver. I don’t think Slade is there to protect him (laughs); he’s there for the opposite. Oliver runs around Starling City because he’s the pin-up boy of the wealthy echelon of the City and he’s also The Arrow.

He learned all his swift moves from Slade so Slade knows everything Oliver is gonna do. Slade essentially built The Arrow and Oliver so he’s literally about to meet his maker. Anyone who knows DC comics knows that Deathstroke is someone that even multiple superheroes couldn’t take down. Oliver knows this is a whole different game altogether and it’s what’s going to accelerate and lift up the series. It’s going to lift it up to superhero status with the Suicide Squad and all of these other elements that are going to have to come together in this one small city.

We’re not talking about guys stealing from banks, it’s going to be a LOT bigger.  The stakes are higher and the power of the opponents is rising and it’s all headed by Slade Wilson at this stage.

Are there any characters from the DC Universe that you would love to see on the show? Ras Al Ghul for instance?

I’ve mentioned him so many times that I’d love to see him when he does show up and who they’d cast. He’d be a wonderful character to bring in, so yeah so we’re all excited to see what happens with that one. I can’t say that I’ve got any other information on that at the moment though. Particularly him, I’d be interested in seeing what happens.

I’ve not had the same kind of demands on this show that I had on Spartacus. Spartacus was like everything took place in an Arena fighting, you know? This one’s been a lot slower paced but this one I think we’re coming to a turning point now. The battles are about to be waged on this show; I don’t think anyone’s seen any real battles yet.

We’ve had fires, Ivo and a couple of characters but that’s all on the mortal playing field. The show is about to ascend from the mortal arena to the arena of superheroes and supervillains.  That will be the point when I as an actor will realise that I’ll have to start lifting again and be super busy at the gym.

So we’ve had all these smaller occurrences that are all leading up to a bigger picture. In that bigger picture lies the future of Starling City which will become a battlefield.

Thanks for taking the time to chat with The Action Elite and all the very best with the show.

Arrow is on the CW WEDNESDAYS 8 .7c