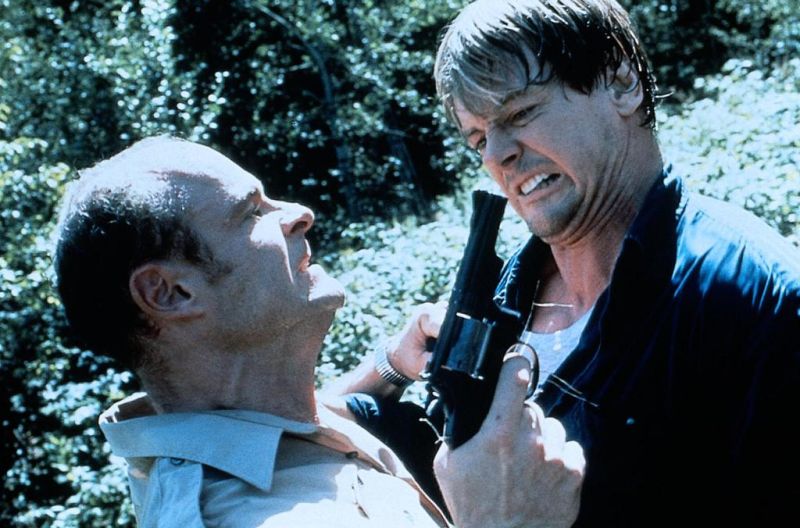 Marked Man isn’t anything spectacular but it does have a few decent fights and Roddy Piper makes any movie watchable.

Plot: Frank, an auto mechanic, witnesses the love of his life’s demise at the hands of a drunk driver. Frank lets lose his rage, and kills the man. He then goes to prison, where he is framed for the murder of a fellow inmate. Frank sees escape as the only possible way to find out all the answers in the convoluted plot to kill that inmate, and find the proof to convict the true killers.

Review: Roddy Piper stars in this rather derivative and forgettable 90’s actioner. It feels like The Fugitive and several other movies all rolled into one and lacks anything resembling originality.

What it does have is Roddy Piper’s easy going likability which has you rooting for him from the start. The plot is indeed convoluted and there are a few too many unlikely coincidences which happen making it lack any real credibility.

The best thing about the movie are the fight scenes; Piper was never one for flashy martial arts but was always more of a bruiser. In one climactic fight scene, a goon is using martial arts whereas Roddy just charges at him and clothes-lines him. He kicks and punches his way out of fights using sheer brute force and willpower.

Miles O’Keeffe (True Vengeance) plays one of the least threatening villains of all time Vince Mallick, the man responsible for setting up Piper. He’s just a bit bland and lacks anything memorable about him and frankly he just isn’t evil enough.

It does get quite tense in places with Frank (Piper) constantly on the run with a few close calls but I found myself struggling to care as you could already guess the outcome in the first 20 minutes.

Overall, Marked Man isn’t anything spectacular but it does have a few decent fights and Roddy Piper makes any movie watchable.