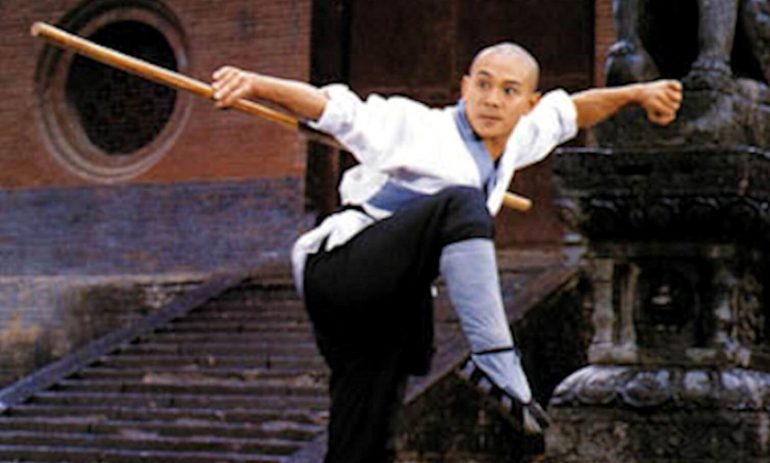 Martial Arts of Shaolin has some spectacular martial arts sequences, likeable characters and a hilariously over the top villain.

Plot: Jet Li weasels out of the north Shaolin temple to assassinate a despotic ruler at the ruler’s extravagant public birthday celebration. Two other men from the south Shaolin temple also set out to assassinate the ruler, but all three fail and are chased all over by soldiers. Meanwhile, one of the southerners turns out to be a cross-dressed woman, who is also discovered to wear a footbell to match Jet Li’s, meaning they are somehow slated for an arranged marriage.

Review: Jet Li stars in this Shaw Brother’s gem which has some truly breathtaking martial arts and possibly one of the best final 20 minutes in martial arts movie history. It takes a little while to get going but you’ll just get swept up with the rather stunning visuals of sweeping mountains and engaging characters.

He Sao (Cheng-Hui Yu) is the villain of the tale and he’s so smug that you can’t wait until he gets his ass kicked and I’m happy to report that his final moments are incredibly satisfying. He isn’t the greatest actor ever though with some fantastically over the top evil laugh moments which only add to the entertainment factor.

Jet Li plays Zhi Ming, a Shaolin monk who struggles to live a life of peace as he thirsts for revenge against the man who killed his parents. He teams up with two other Shaolin monks from the South and they won’t stop until they get retribution. You’re totally on their side right from the start and there are few who could match jet Li in his prime in terms of speed.

The music is a little annoying in parts and gets intrusive but it feels authentic and does the job..

The scene at the birthday celebration nicely builds up tension and when the assassins finally strike it’s worth the wait and that’s when the action really kicks into gear.

Overall, despite a slow start Martial Arts of Shaolin has some spectacular martial arts sequences, likeable characters and a hilariously over the top villain. Worth checking out for sure.