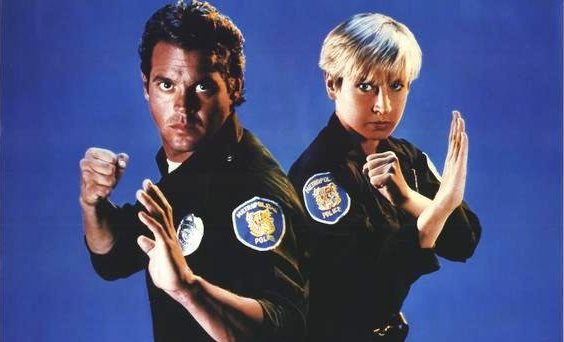 I love the Martial Law movies; both of them have Cynthia Rothrock kicking plenty of ass and are entertaining in their own right. But which is the better movie? Let’s take a look, shall we?

Martial Law is a straightforward action movie that delivers the goods with Karate-expert police-partner lovers (Chad McQueen, Cynthia Rothrock) trying to stop a gang of drug smugglers and car thieves.

First off, I liked how they try to subdue their enemies rather than always shoot to kill which was a nice touch and gives us an opportunity for more fight scenes.

Cynthia Rothrock is really more of a supporting character in this movie and the lead is played by Chad who is likable and a believable action hero. What ever happened to him? I haven’t seen him in anything for years…

The one thing I loved was the humour, especially in the opening scene “What are you, new?” “Yeah!” As soon as that line was delivered I knew I was in for an hour and a half of ass-kicking fun. The odd supporting character is a bit annoying, especially Faster Brown but I’ve seen worse and it didn’t ruin the entertainment value.

David Carradine always classes up any film and made for a great bad guy; he has an awesome final fight with Chad McQueen and it all ends very satisfactorily.

The score is everything you need from an action movie; electric guitar and saxophone greatness which was quite simply necessary for these kinds of movies.

Overall, Martial Law has plenty of fights, action and humour to please any old-school action fan.

For Martial Law II: Undercover, gone is Chad McQueen but he is replaced with the even more awesome Jeff Wincott.

Wincott plays Det. Sean Thompson Sean and Cynthia Rothrock returns as Billie Blake. They are (obviously) undercover cops and martial arts masters. Investigating the death of a cop, they uncover a deadly ring of murder and corruption at a glitzy nightclub where the rich are entertained by seductive women and protected by martial arts experts. Billie goes undercover to infiltrate the crime ring, leading to an explosive finale.

So the story is the same as every other action movie ever made but that’s just fine and it does exactly what it needs to do; set up some unlikely but entertaining fight scenes.

Martial Law II is well paced and I don’t know what it is about 90’s straight to DVD/Video movies which bring a smile to my face, but they just do.

It is however, let down by some dodgy acting by the supporting cast with some clunky lines. The villain is a yuppy prick so you are counting down until his (rather satisfying) demise; any movie with Evan Lurie is always worth watching as he could always play smug with great ease.

Martial Law 2 also has one of the best exploding head scenes I’ve seen for a long time with Wincott shooting a bad guy in the face with a shotgun; definitely worth watching in super slow mo.

Like the first movie the music has some hilariously over the top saxophone all the way through and is more distracting than anything, but that’s part of the charm.

Martial Law II: Undercover is a pretty kick ass martial arts/cop thriller with plenty of awesome fights to keep action fans happy. It’s just a shame about some of the acting.

Hmm, this is a tough one actually because I love both movies but I’ve always been a huge fan of Jeff Wincott and the second movie has more Rothrock so I’m gonna go with Martial Law II: Undercover.