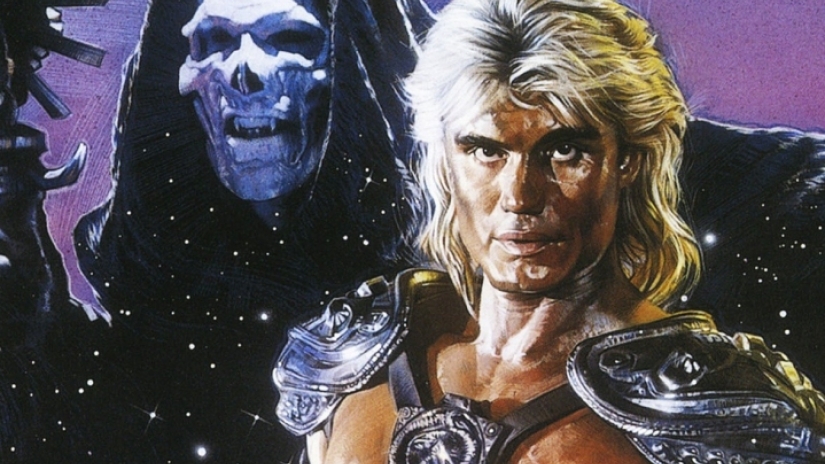 Masters of the Universe (1987) Blu-ray Review

A Not so Guilty Pleasure

Masters of the Universe isn’t a great adaptation of the beloved characters but it still makes for a fun fantasy adventure with Dolph Lundgren perfectly cast as He-Man and Frank Langella at his scenery chewing best as Skeletor. This Blu-ray looks and sounds great but aside from an interesting commentary from the director there isn’t anything else to get excited about.

Plot: When the evil Skeletor (Frank Langella) finds a mysterious power called the Cosmic Key, he becomes nearly invincible. However, courageous warrior He-Man (Dolph Lundgren) locates inventor Gwildor (Billy Barty), who created the Key and has another version of it. During a battle, one of the Keys is transported to Earth, where it is found by teenagers Julie (Courteney Cox) and Kevin (Robert Duncan McNeill). Now both He-Man and Skeletor’s forces arrive on Earth searching for the potent weapon.

Review: I remember my brother taking me to see Masters of the Universe when I was a child; I grew up watching the He-Man cartoon and couldn’t wait to see a live action adaptation.

From Cannon Pictures Masters of the Universe was director Gary Goddard’s first picture and he candidly talks about it in the film’s audio commentary; he had to do a lot of special effects, but the film only had a limited budget. He explains that’s why we got the character of Gwildor rather than Orko as they just couldn’t afford to do such an effects heavy character at that time.

Even as a 9-year-old I remember feeling a little disappointed by the film as they took so many liberties with the story and characters. Where was Prince Adam and King Randor? Why did the action move to Earth? I wanted to explore the world of Eternia more but once again budget issues would get in the way of that.

The film itself is campy fun just as an escapist fantasy filled with 80’s neon and a sense of wonder; it’s packed with action including swordfights, shoot-outs and a few explosions.

The cast is surprisingly decent with Dolph Lundgren born to play He-Man; to this day I can’t think of anyone else better suited for the role. We don’t get to see He-Man doing much in the way of showing how strong he is aside from pushing some pillars over in the final battle but he just comes across as quite strong rather than the most powerful man in the universe.

This is very much Frank Langella’s movie as Skeletor clearly channeling The Emperor from Star Wars as he chews every line of dialogue with relish and I remember finding him quite intimidating when I was younger. Meg Foster was perfectly cast as Evil-Lynn with her ice blue eyes; the other henchmen weren’t so lucky with Karg especially being maybe the most ridiculous creation I’ve ever seen. Beast Man looked alright and Blade was a cool addition but it’s too bad we never got any of the other characters from the cartoon/toy line in terms of villains.

Jon Cypher was ideal as Duncan AKA Man-at-Arms and he really felt like the cartoon character brought to life; Chelsea Field was also likeable as Teela.

It’s no secret that He-Man is basically the same as Superman with Prince Adam the Clark Kent persona and He-Man obviously Superman so it makes sense to have a Superman-esque heroic score which we got from the legendary Bill Conti. It’s too bad we didn’t get a big orchestral version of the cartoon theme (which will always be the best He-Man music) but it’s got a very John Williams style whimsical score which works perfectly.

This was Courteney Cox’s first film and her story is what gives the film its heart with her parents being killed in a plane crash so she wants to leave her small town and start afresh leaving her nice guy boyfriend Kevin (Robert Duncan McNeill) behind. This is until He-Man and friends show up and change their destinies forever.

James Tolkan was essential to any major 80’s film and he played practically the same character in every movie – the stern tough guy with a heart of gold and it’s no different here. I like how at the end he just stays in Eternia and ends up sitting on the throne next to the Sorceress. I’m not sure what he’d do for a work but maybe he could join the royal guard. I overthink these things way too much but it matters!

A lot of the visual effects don’t hold up so well but they are a product of the time; there were some nice ideas though especially the Air Centurions on their hoverboards.

I recently got the Blu-ray and all it has is the theatrical trailer and the commentary from the director; the commentary is admittedly entertaining but it would have been nice to see more behind the scenes footage and interviews with the cast and crew. There was a Netflix documentary called Power of Grayskull which would have been a great addition but it came out after this Blu-ray unfortunately.

The picture and sound quality were well remastered and it has subtitles so that’s always welcome. Aside from that it’s pretty barebones so if you already own it on DVD then you can just stick to that.

There are two franchises which I would love to be asked to write and that would be a new adaptation of either He-Man or Castlevania as I feel I have an understanding and respect for them both that it would truly be a passion project.

Overall, Masters of the Universe may not be a great adaptation of the He-Man cartoon but there’s no denying Dolph Lundgren was well cast as He-Man as was Frank Langella and Meg Foster in their respective roles. It’s got wall to wall action and it’s never boring with its 80’s aesthetic; it’s very much a product of the time and I find it hard to dislike anything with the Cannon logo at the start. This Blu-ray is only worth buying if you really wanted the film in HD but otherwise there isn’t much that stands out here.