Matthew Tompkins, an action-movie staple whose credits include Machete, Sicario and TV’s Prison Break, fills us in on his latest film – as star and producer – the killer thriller The Harrowing, out December 25 from Film Mode Entertainment.

Who is Ryan Calhoun and what makes him tick?

When the narrative really reveals him, Ryan is a Vice Cop working under a cloud of suspicion and disgrace from the death of a former partner on a sting operation gone bad. He’s married, but the relationship with his wife, Anne, is strained from the risks he takes, and from the burden of guilt he carries. Ryan is a good man, a man of action, but suffering from the trauma of terrible things beyond his control. His quest to find the truth about what happened, and, essentially, his own identity, is at the very core of the film itself.

Not really, no. Only that we are both married to extraordinary women, I suppose.

Is this the first time you’ve played a cop?

No, I’ve played a number of different kinds of cops, Sheriffs, FBI, Secret Service guys, Special Forces, etc over the years. Getting the procedural language down, feeling natural with it, is the key. Also getting used to carrying guns and having them be part of any potential equation…not something that is a part of my own life day to day, obviously.

Do you find it easy to ‘switch off’ at the end of the day after filming a movie like this?

Well, I come from a 30 year backgound of professional Theater as well, where you may be doing up to 8-10 shows a week onstage for 3 hours at a time in roles that rip your soul apart…you develop a facility for leaving the character behind when the work is done…or the alternative is slight insanity. Lol. So, no-no trouble shutting it off at the end of the day or off camera.

You’ve done some amazing work in your time – how different was it working on The Harrowing to say, some of the big studio fare you’ve done like Machete, Sicario and Bad Ass 2?

Working on the bigger Studio films is rewarding for the exposure and for some of the top flight talent you have a chance to work with, but in the end, unless you are at the epicentre of it, you’re just a cog in a VERY big machine. For me as an actor and producer, THE HARROWING is a much more satisfying experience from beginning to end because I AM in the eye of the storm on a number of different levels, driving the narrative, with enormous responsibility to stay true to my character’s arc and through line, and in true collaboration with the Director…it demands a kind of focus and energy that the “hired gun” gigs on other things simply don’t, grateful as I am to have them.

Can you talk about your experience working on Friday Night Lights? I imagine that would’ve been quite something…

My experience on FNL was a good one, but nothing stands out about it for me. Just a solid few days on the set with some very driven and talented people. Fun story though…Peter Berg, who directed the film and was behind the TV series, and I were in a film together WAY back in the early 90’s called RISE AND WALK: THE DENNIS BYRD STORY about the former New York Jet defensive end who broke his neck. Peter was just an actor then, but was a fantastic dude, very high energy, and we had a fun couple of days together. I played his best friend from his days as a Tulsa Hurricane, Eddie. 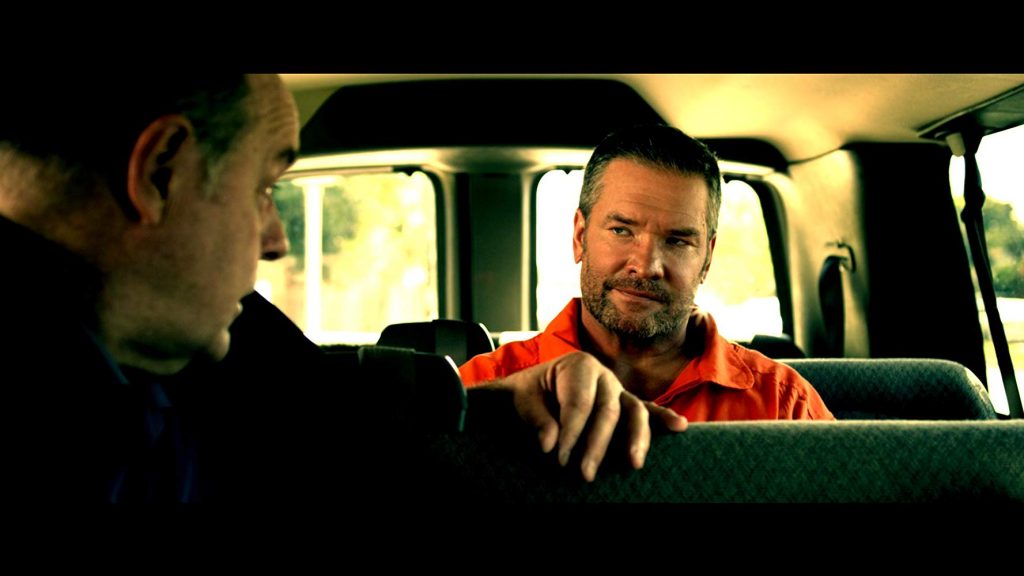 TV has been good for you. Has all that small-screen work led to movie work?

They are such different disciplines, TV and Film, that there really hasn’t been much cross pollination from one to the other. That is changing a bit with so much AMAZING stuff happening on HBO, NETFLIX, etc but one hasn’t necessarily led to the other for me.

Do you have a favorite series that you’ve worked on?

LONGMIRE has been my best overall experience so far…the show is done now with it’s 6 season run, but I got to guest star in Season 3 and spent a fantastic 10 days in the Santa Fe, NM area. GREAST cast and crew, very skilled, very humble, first class all the way.

What about a film?

Any of the films we have produced have been sublime experiences in one way or another…and THE HARROWING is at the top of that list.

And if you had to name two films that The Harrowing resembles, what might they be?

Jacob’s Ladder, Angel Heart, One Flew Over The Cuckoos Nest.