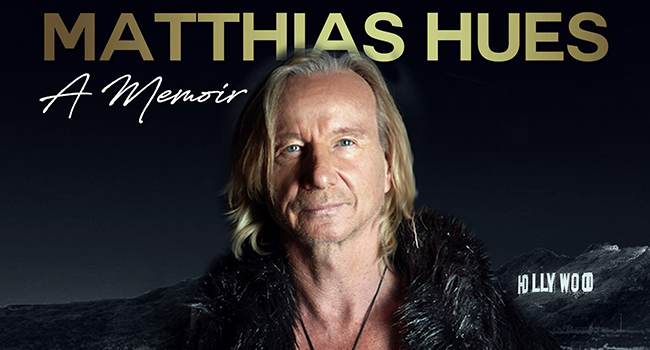 Shirtless in Hollywood is a must read for even casual fans of Matthias Hues giving some insight behind the scenes of his most popular films as well as the competitive nature of the action movie business. It’s filled with tall tales that you wouldn’t believe if they were made up but as the saying goes truth is stranger than fiction and sometimes more entertaining.

Plot: Welcome to my world in Hollywood. A world that I had set out to conquer with my eyes on the prize to become a movie star. A road traveled and spiked with events and hair raising experiences that make you wonder?

Would you believe that there is a catch when the most potent deal maker in Hollywood says to you that you will be the most significant action star in Hollywood?

What would you do, if you went on a date with one of the most famous women in the world? Who do you think pays for it and how much would such a night cost?

Ever wondered if the indecent proposal is just a movie or is the 1 million dollar price tag the going rate in Hollywood for a one-nighter?

Do you want to know what it feels like it to be a high stakes gambler in Las Vegas, residing in penthouse suites with private rooftop pools while placing $5,000 chips per hand and not spending one dollar from your pocket?

Did you know there are exotic rulers in this world who keep deadly secrets while harboring wealth beyond everyone’s reach or imagination while at the same time rubbing elbows with the most famous people in the world? So why would one of them contact me, a Hollywood actor on Twitter before she finds herself kidnapped and disposed of in a mental institution?

Do powerful gangsters have an affinity for Hollywood? It makes you wonder why an actor would be flown via Helicopter into the lair of the most notorious biker group in the world “The Hells Angels.”

Just sit back and enjoy a first-hand look into my Hollywood world of glitter, power, fame, and fortune. A world where serious and talented artists flock in from around the world with dreams of making it to the top. A world I live in which is barely separated and yet vastly shared with hustlers, con artists, wannabes.,

German actor, bodybuilder, martial artist and Action icon MATTHIAS HUES has racked up over 70 screen credits in his thirty-plus years in the entertainment industry, with the villainous alien that antagonizes Dolph Lundgren in the sci-fi action classic I COME IN PEACE being his most popular role to date.Now Hues will be sharing with us some of his craziest stories from behind-the-scenes in his memoir SHIRTLESS IN HOLLYWOOD.

Review: I’ve been a fan of Matthias Hues for many years ever since his roles in No Retreat, No Surrender 2: Raging Thunder, the Dolph Lundgren actioner I Come in Peace, TC-2000, Mission of Justice and many more. He always made for an imposing figure on screen but as with most actors known for playing antagonists the real Matthias Hues comes across as a gentle giant who has led a rather incredible life.

His autobiography titled Shirtless in Hollywood: The Battle for Hollywood (to give it its full title) is riveting from beginning to end as he explores his early life in Germany, working in hotels in Paris and then his eventual move to California to work in action movies.

There are far too many fascinating anecdotes to go into here but reading behind the scenes tales from movies like No Retreat No Surrender 2, I Come in Peace and TC-2000 are a dream for any action fan. That isn’t the primary focus of this book however, as it’s more about Hues’ personal journey and all the frankly amazing things that have happened to him over the years.

He really pulls back the curtain on the glitz and glamour of Hollywood with tales of parties, sleaze, lies, deceit and criminals. It’s a cautionary tale for anyone who wants to go to tinsel town and make a name for themselves and may have you think twice as Hues has genuinely struggled but his sheer willpower kept him going.

There are several tales where he doesn’t mention people’s names but the fun part is trying to guess which celebrity he is talking about as there is some crazy stuff that has transpired.

Hues has an infectious love for adventure never shying away from taking risks which is what has made his life so interesting travelling all around the world, meeting new people and even dealing with scammers who fleeced him out of money.

Overall, Shirtless in Hollywood is a genuine page turner as you wonder what crazy tale Hues will regale us with next; there is enough behind the scenes info for fans looking for it but Hues life has been (so far) more exciting than any action movie.