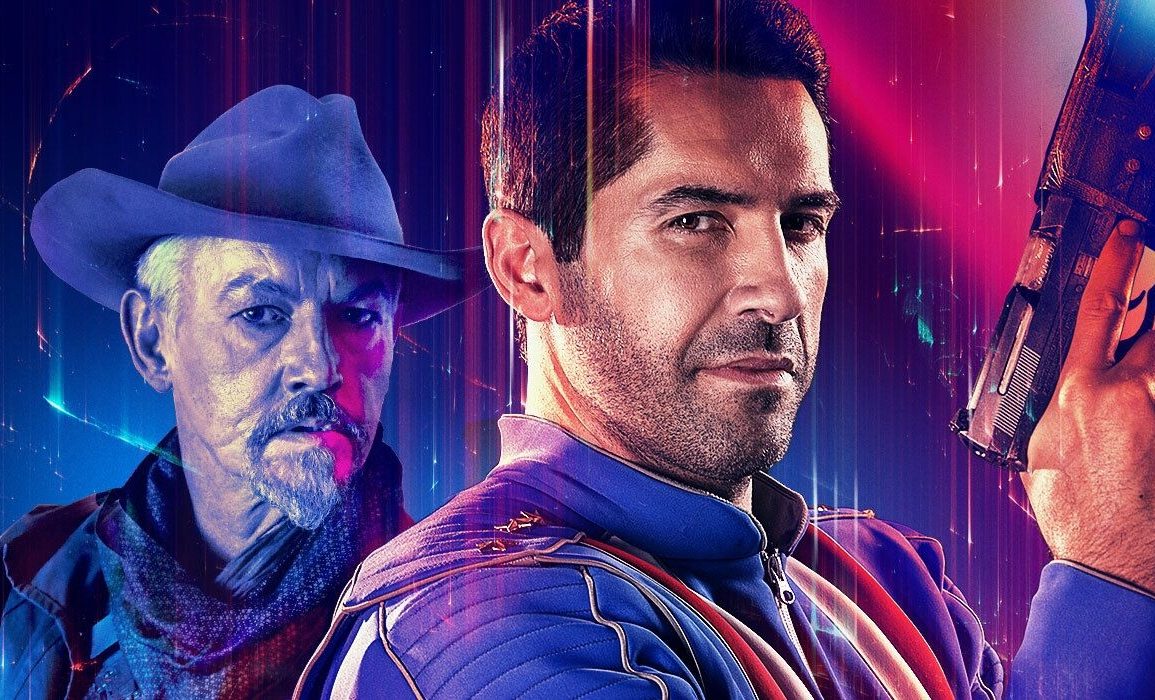 Max Cloud may not be for everyone and I’m sure a lot of you will dislike it but the arresting visuals, awesome music and memorable characters make it worth checking out. Scott Adkins once again proves there is more to him than just fight scenes but fear not action fans there is plenty of action to go around too.

Plot: When teen gamer Sarah finds an “easter egg” and accidentally opens a portal into her favorite side-scroller, she becomes trapped in a notorious intergalactic prison, home to the galaxy’s most dangerous villains. To escape, she must finish the game with a little help from her not-so-savvy friend on the outside…or remain a 16-bit character forever.

Review: Max Cloud is a very different kind of movie for Scott Adkins; it’s very lighthearted and silly, making it pure popcorn fun. It’s a nostalgia trip back to the 80’s with an awesome synth infused soundtrack and most importantly some Stan Bush classics including Dare, most famously used in the 1986 Transformers movie.

This is very tongue in cheek fare, and some have described it as “cheesy” which I suppose is true but that’s generally the point. I found several laugh out loud moments and Scott Adkins once again shows he is more than just punches and kicks delivering a hilarious portrayal of a 16-bit video game hero brought to life.

Our two leads are Sarah (Isabelle Allen) who in an obsessive gamer and her loyal friend Cowboy (Franz Drameh) who has to take over playing the Max Cloud video game when Sarah is sucked into it. Sarah is a little hard to take to at first due to her obsessive behaviour but as the story goes on her bond with Cowboy grows and we end up rooting for them to save the day. Sarah’s relationship with her father is also strained but he has his own secrets which explain why they are distant from one another emotionally.

Aside from Scott Adkins, Max Cloud has an impressive supporting cast including the always awesome Tommy Flanagan as bounty hunter Brock Donnelly, then we have The Mummy’s John Hannah and No Time to Die’s Lashana Lynch as the villains of the piece. I didn’t recognize Hannah at first who is under some prosthetics, but he provides a few laughs but several of his scenes don’t quite land as they should. Lynch has great presence on screen and makes for an arguably more interesting nemesis than Hannah so I look forward to seeing how she is going to be in the next 007 feature (if it ever comes out).

It’s the sheer sense of infectious fun that makes Max Cloud so watchable and I love its visual aesthetic where it all looks like a synthwave video. It feels like a cross between Jumanji and Scott Pilgrim with out of this world action.

If you’re looking for fights like the Undisputed movies then I can say right now this is not your kind of movie; make no mistake there is plenty of action but it’s more in the style of a videogame (obviously) and for the most part it works successfully bringing these outlandish characters and world to vivid reality.

I actually want to play the Max Cloud videogame as it looked awesome and side scrolling beat ‘em ups were a big part of my childhood.

Overall, if you’re a child of the 80’s like myself then Max Cloud is going to be right up your street with some laugh out loud moments of humour, memorable characters and some fantastic music choices. It’s a refreshing change of pace for Adkins who demonstrates his comedic chops but we still get plenty of fight scenes and action too.