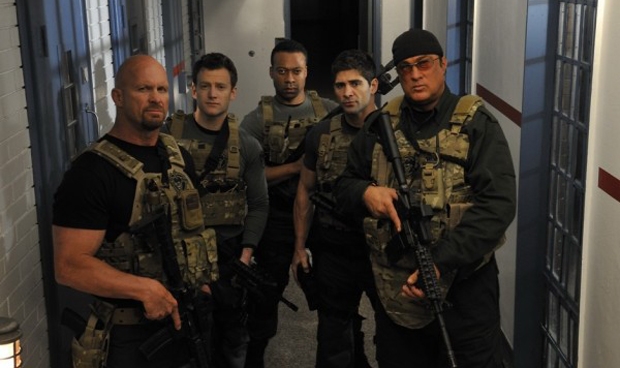 Plot: “When former black ops operative Tom Steele (Seagal) and his partner Manning (Austin) are assigned to decommission an old prison, they must oversee the arrival of two mysterious female prisoners. Before long, an elite force of mercenaries assault the prison in search of the new arrivals. As the true identities of the women are revealed, Steele realizes he’s caught in the middle of something far bigger than he had imagined.”

Review: After me moaning about the lack of one-liners and humour in today’s action movies, Steve Austin comes along and saves the day in arguably his best film yet. He looks like he’s having a blast in this movie and literally laughs as he beats up the bad guys by the dozen. We have great fight scenes with no shaky cam and Austin owns the movie in his most bad ass role. However, he also teams up with one Steven Seagal who is also very entertaining but doesn’t quite display the personality Austin does in it.

It is always fun watching Steven Seagal beat people up though as he doesn’t really punch them, he bitch slaps them! He utterly humiliates every opponent and barely breaks a sweat; have you noticed how Seagal never seems to get injured in his movies? He’s always the invincible bad ass.

It’s not just the guys who get to bust some heads, we also get the lovely Aliyah O’Brien who beats the living hell out of a potential rapist. As Austin says “My kinda girl.”

The script has a lot of swearing in it and I mean a LOT; normally I don’t care as I’m a Scot and we do swear plenty but it does show a lack of great writing to have everyone say “fuck” every 2 seconds. Still, if you’re offended by bad language, you’re not about to watch a film like this. It’s got some great brutal violence in it and every fight scene kicks some serious ass too.

You can tell it has a low budget as it does look kinda cheap in places, but considering the limitations the cast and crew have clearly worked hard in creating the hardcore, old-school, actionfest of the year.