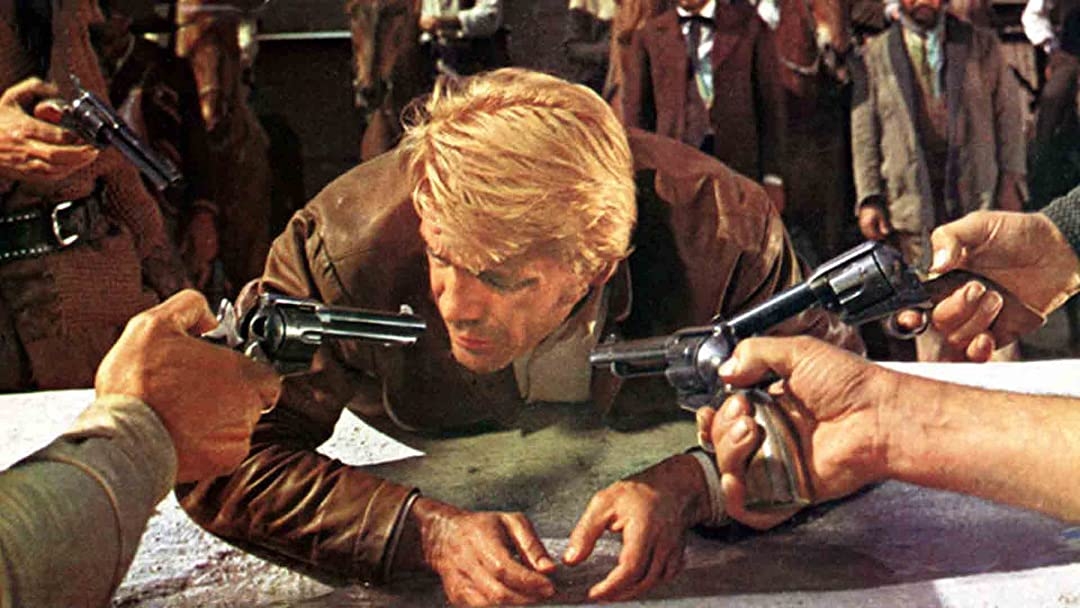 May God Forgive You… But I Won’t may be standard revenge fare but George Ardisson makes for a compelling protagonist and the final 20 minutes is a glorious bloodbath of vengeance.

Plot: While Cjamango is away from his farm, six bandits murder his family. Coming to terms with this tragedy, he sets out to avenge his loved ones.

Review: I had never seen this movie until it popped up on my Amazon Prime the other day; I knew the name as it was a classic title but last night, I sat myself down to watch it. May God Forgive You… But I Won’t is your standard revenge tale, but it’s packed with action from beginning to end with a bodycount surely in the triple digits.

George Ardisson plays our protagonist Cjamango McDonald who is a man of few words but when his family is brutally murdered his actions speak volumes. Hunting each of the men down who are responsible Cjamango shows no mercy until every last one of them is dead. Ardisson brings an icy cool to Cjamango with his awesome leather jacket and piercing glare; we root for him immediately and watching him dispense justice is endlessly enjoyable.

Along the way he meets Barrica (Ignazio Spalla) who points him in the direction of the killers because he has his own reasons for wanting them dead. They are all wanted men and Barrica is all about the money and as the bodies pile up he gets richer.

Dragomir Bojanic-Gidra plays the primary antagonist Dick Smart (that’s really his name) and he’s truly hateful; he just rides around beating people up and murdering as if it’s nothing so you’re in no doubt that he is a wild dog that needs to be put down.

The music is your typical Spaghetti Western fare and it lacks the memorable themes of the Leone movies but it works for this tale.

It’s a brisk 90 minutes but it’s the final half hour that makes this stand out as Cjamango and Barrica bring out the big guns (literally) utterly decimating the gang in a bullet riddled bloodbath.

A lot of the acting isn’t the greatest and at times it does get a little melodramatic but these kind of movies usually are so we know what to expect and just enjoy the ride. Speaking of which Ardisson certainly could ride a horse looking confident and comfortable in the horseback scenes.

Overall, May God Forgive You… But I Won’t is a wonderfully violent Spaghetti Western with George Ardisson making for a badass lead and a blood-soaked finale making this a movie you should definitely watch at least once.