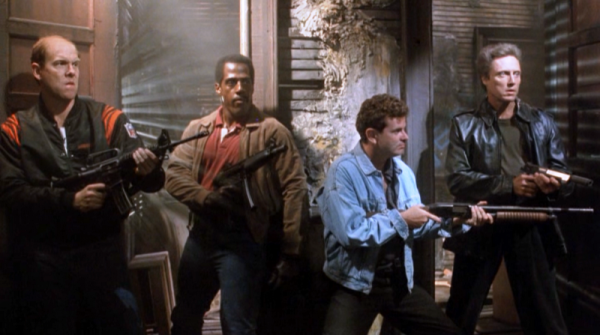 McBain is a classic action flick and essential for any fan’s collection.

Plot: Santos attempts to lead a people’s revolt in Colombia to overthrow the oppressive El Presidente. When his revolt fails and he is killed, his sister Christina goes to New York to find McBain, a lieutenant Santos rescued during the Vietnam War. McBain agrees to avenge Santos’ death, calls up his old war buddies, raises the necessary funds by killing a few drug dealers and threatening the mafia, then leads an attack to topple the corrupt government.

Review: Sadly this isn’t a movie starring one of my favourite Simpsons characters and at no point does anyone say “Bye Book!” but aside from that McBain happens to be one of the best action movies I’ve ever seen. It’s got a quality cast that includes Christopher Walken, Michael Ironside, Steve James and Maria Conchita Alonso.

McBain also has an intriguing story which kept me gripped; it is a little slow in the first half but that’s establishing characters so no real complaints here. At about the 30 minute mark the action kicks in and some of it is genuinely jaw-dropping and has a real sense of scale you rarely see in today’s movies.

There is an awesome aerial dogfight that climaxes with a fighter jet shooting at tanks and an army on a runway and it’s outstanding stuff. Real explosions, impressive stunt work and it must have taken months to arrange.

The acting is quality because you have genuine actors in the roles and Walken is very convincing as a hero; it’s nice to see Michael Ironside not play a villain for once too and you are rooting for these guys to win.

The music by Christopher Franke still sounds great and there is a cool electric guitar piece during one of the many excellent action scenes.

I love stories about revolutions and corrupt governments because it’s all utterly believable and you pretty much always are on the side of the rebels.

There is plenty of humour too but nothing cheesy; the whole movie stands up very well considering it’s 22 years old.

Overall, McBain is a classic action flick and essential for any fan’s collection.