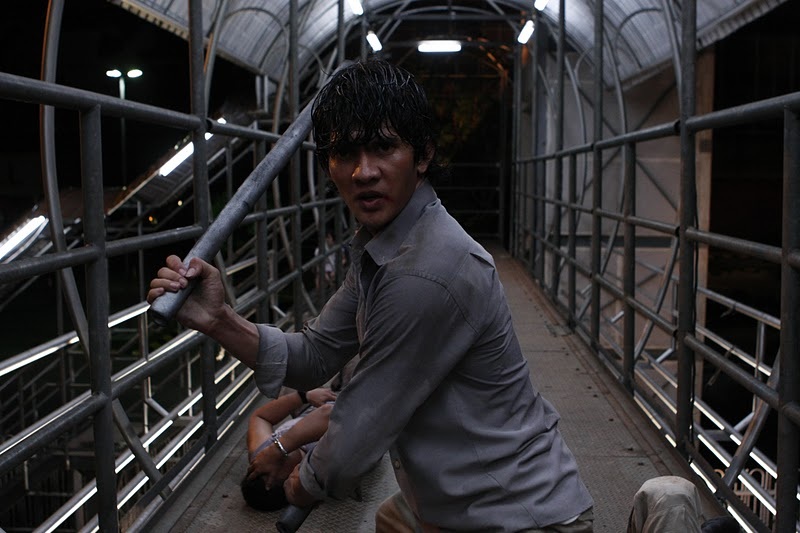 I know this movie wasn’t technically released until something like November 2009 but I hadn’t watched it for a while and saw that it was on Netflix so I figured now was good time to revisit this martial arts classic.

I go into some spoilers here so if you haven’t seen the movie then tread carefully.

Merantau doesn’t get talked about as much as The Raid or The Night Comes for Us but it was the debut film of Iko Uwais and then The Raid cemented him as a new martial arts superstar.

The plot follows Yuda, a young man from West Sumatra and an expert in silat. As part of the merantau (journeying) tradition, he leaves his home to seek experience and success. He plans to teach silat to the children of Jakarta. When he arrives in Jakarta things don’t go quite as smoothly as he would have hoped and he ends up sleeping in a construction site. One day while chasing after a kid who stole his wallet he finds a girl being threatened by a local club owner called Johnny. Yuda beats him up and then ends up having to save the girl again when she is taken by psychotic human trafficker Ratger (Mads Koudal).

Ratger is one of the meanest villains I’ve seen for a while even at one point smashing a glass on his brother’s head in frustration. He’s as ruthless as they come and you hate him every second he is on screen.

Yayan Ruhian also makes an appearance as Eric, a fellow practitioner of Silat who Yuda meets on the bus on his way to Jakarta but you just know that the two will meet each other in some capacity later on.

We find out that Eric is working for Ratger and he is sent out to find this stranger who has come to town and messing up their plans. When Eric and Yuda face off it is quite different from The Raid as Eric isn’t a one note villain but reluctant to fight him but he knows he has to or else he will also be killed. Their fight in the elevator is arguably the best of the movie but there isn’t a disappointing fight in the entire film.

Merantau may not be quite as intense as The Raid movies (at least for the first half) and is rather slow before the action kicks in but it has genuine heart and I find Yuda may be my favourite Uwais character to date. He is a pure and incorruptible hero who refuses to stand by when he sees a girl in trouble and all he wants is to do right by his family and generally be a good person.

When he says goodbye to his mother at the start it causes a lump in the throat every time. I never really liked how the movie ended on such a downbeat note as I wanted them to be reunited; I know it’s probably more “realistic” but I do prefer happy endings.

Merantau is directed by Gareth Evans (who needs to come back and make kick ass action movies again) and you can tell this is the same man who helmed The Raid movies; the camera work and fight scenes are perfectly shot so we can see everything that is going on but we also never lose sight of the story’s beating heart.

Interestingly enough Evans apparently met Iko Uwais when he was hired to make a documentary film on Silat. Impressed by Uwais’ screen presence, Evans casts him as the leading role for his first action movie and the rest is history.

After 10 years Merantau remains a seminal martial arts movie with Iko Uwais proving he was a force to be reckoned with in action cinema. It may take a while for the action to take off but when it does it’s worth the wait with several memorable fight scenes and a truly despicable villain.