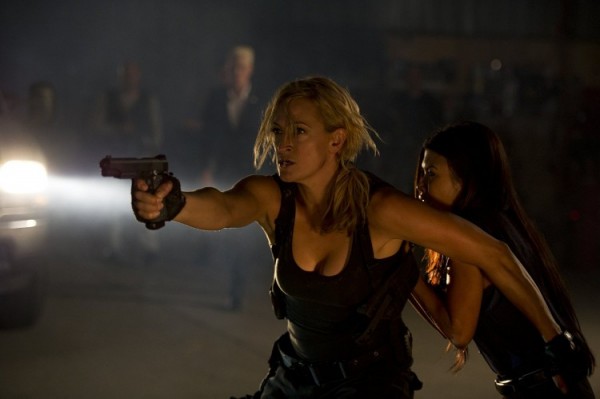 Mercenaries doesn’t try to be anything spectacular and it isn’t but for low budget, 80’s thrills it’s pretty fun and it’s refreshing to watch ladies kick some ass.

Plot: A diplomatic official is captured and imprisoned while touring a war zone, so a team of elite female commandos is assembled to infiltrate a women’s prison for a daring rescue.

Review: The “Female Expendables” has pretty much arrived and it’s been brought to us by… The Asylum… no wait, come back! You may think this will be kinda bad because it’s from the people behind the Sharknado movies but I gotta tell you, it’s actually kind of fun. Sure the movie isn’t great but it really feels like an 80’s action movie and our leads are likeable.

Our female badasses are Kristanna Loken, Vivica A. Fox, Nicole Bilderback and Zöe Bell; they are called in to rescue the President’s daughter by one Cynthia Rothrock who sadly doesn’t really get to kick any ass. Great, you bring in the one genuine action star and don’t let her beat anyone up… well, she does have one moment but it’s pretty brief.

No, this movie belongs to the one and only Zöe  Bell, sporting a slightly wonky American accent but she’s so awesome that we’ll let that slide.

Kristanna Loken is lovely as always and her character brings some heart to proceedings but if you want scenery chewing, just check out the villain: Bridgette Nielsen. She is on bonkers form as a power mad nut job who has kidnapped the President’s daughter for whatever reason; it doesn’t matter, it’s just an excuse for her to be mean and torture people.

There isn’t much to the story but it has a few twists and turns but this being an Asylum picture, don’t expect it to have good production values; I mean, it looks pretty cheap with some rotten CG (but certainly not the worst) and the script is terrible but frankly you can say that about The Expendables movies as well.

This movie still has plenty of bloodshed and a satisfying finale with an over the top bad guy death, just like the good old days. It’s the kind of film that if Cannon films were still around, then they would make something like it. It’s pure cheese and the dialogue is cringe–worthy so why the high-ish rating? Well, it’s a damn good shot at doing an old-school action film and Zöe Bell’s awesome bad ass is great fun to watch.

She gets the bulk of the action scenes and I must say it’s great to watch women beat up bad guys for once; the action genre is crowded with guys so come on ladies, keep it coming!

Action-wise there’s plenty of shoot-outs, punch ups and violence; there are some really hateful henchmen in this movie too so you really want to watch them get their comeuppance.

It does take a little while to get going though and the acting is distractingly bad in places, but it’s still fun.

Overall, Mercenaries doesn’t try to be anything spectacular and it isn’t but for low budget, 80’s thrills it’s pretty fun and it’s refreshing to watch ladies kick some ass. I want more Zöe Bell actioners!