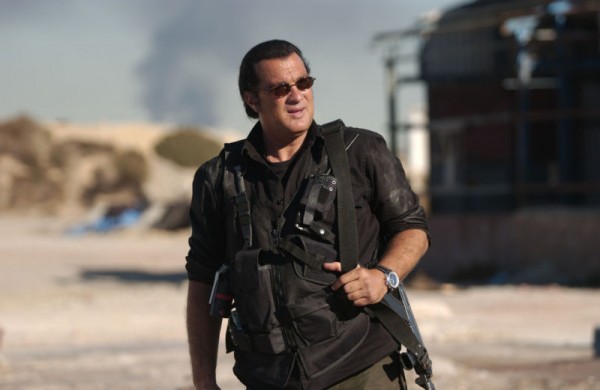 Mercenary for Justice is one of Seagal’s better recent efforts with some good action and Luke Goss stealing every scene.

Plot: A mercenary gets involved in a mission that threatens the lives of his kin. In order to succeed, he must break into one of the most well guarded prisons in Eastern Europe and free the son of the most notorious drug lord in the world today.

Review: Steven Seagal in half-decent movie shocker! Probably because Luke Goss is in it and I am a big fan of his. He’s actually a villain in this movie and he’s pretty damn good at it too. He’s not a mustache twirling villain or anything, but more of a corrupt CIA guy who gets in over his head and makes an enemy of Seagal… big mistake.

I have to say that this is the kind of role Seagal is best at today. There aren’t many fight scenes in it but let’s face it, he’s not exactly exhilarating to watch these days anyway from that stand point.

What this movie does have though is a fantastic opening 20 minutes with Seagal and his mercenary pals stuck in a warzone and it’s pretty spectacular. For once it’s not a cheap looking half-assed movie, but it’s actually pretty impressive on the action front. There are helicopters, tanks and action galore although after that it does flat down a bit in the second half.

The other main flaw is the weird English guy as the main villain; he’s hilariously over the top and ruins what would otherwise be a pretty awesome movie.

Story-wise it’s a bit overly complicated and hard to follow in places but just watch it for the ‘splosions and you’ll have a good time.

Overall, Mercenary for Justice is one of Seagal’s better recent efforts with some good action and Luke Goss stealing every scene.