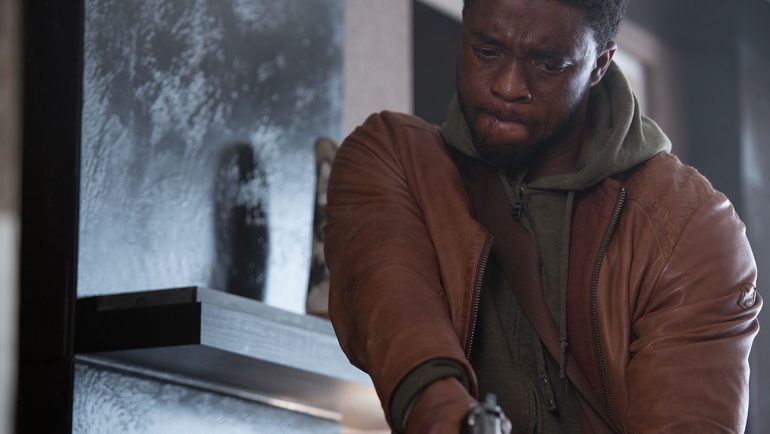 Message from the King is a solid revenge movie, which paints LA in a dark tone, giving us a nihilistic 70’s vibe with some brutal violence thrown in for good measure.

Plot: A mysterious outsider travels to Los Angeles to bring those responsible for his younger sister’s disappearance to justice.

Review: I didn’t know anything about Message from the King until I watched it; I hadn’t seen any trailers but I’d heard from reliable sources it was a solid little revenge tale. It isn’t a classic movie by any means but there’s enough here to enjoy and you can never go wrong with people being hit in the face with bicycle chains.

The story is straightforward enough with Chadwick Boseman playing an elusive stranger from Africa called King who has come to LA looking for his sister; when he finds out she has been murdered he takes the law into his own hands to get revenge on the perpetrators.

This has a gritty 70’s feel with LA looking more like Hell in the way that New York did in that period. At no point will you think, “I want to move to California” as it’s filled with broken dreams and even more damaged people.

King seems polite and unassuming at first but when he finds out his sister’s fate, he changes into a messenger of death and Boseman gets the character just right. It’s a little slowburn but it is rich in atmosphere and the threat of violence is never far away.

When we do get action scenes they are sadly ruined by some poor editing at times so we can’t see what’s going on but that doesn’t really come as a surprise these days. They aren’t the worst I’ve seen though and the fight with King beating a group of thugs with the bike chain is certainly the action highlight.

Luke Evans plays a seedy dentist who is one of the main (sort of) villains but he isn’t really developed enough for you to hate him… and neither are any of the bad guys for that matter. Alfred Molina is certainly creepy but doesn’t have enough screen time for you to really care about his fate.

There really isn’t much to the story and very little that sticks with you after watching but it’s entertaining while it lasts and fans of old-school vigilante movies should find plenty to enjoy.

Overall, Message from the King is a solid revenge flick, which paints LA in a dark light, giving us a nihilistic 70’s vibe with some brutal violence thrown in for good measure. It’s not an amazing movie but there’s enough here to engage and Boseman does the best with what he’s given.